Ultimate Omega is an Omega-3 based nutritional supplement advertised as a therapeutic support for the body and mind. The supplement offered by Nordic Naturals is most beneficial for the health of the heart and the immune system. Various other benefits have been attributed to Omega-3 fatty acids including for the brain, joints, skin or vision.

The manufacturer of this product is Nordic Naturals, a Norwegian company specialized in delivering Omega-3 enriched oil based supplements. The company was born from the founder’s need to treat his gymnastic injuries while studying in America. Because the products available at that time in the US were ineffective, Joar Opheim was forced to constantly bring the medication from his native country, Norway. He developed patented fish oil technologies and started a business that would provide researched, safe and effective supplements for people all over the world.

Ultimate Omega is claimed to be the subject of several published scientific studies conducted to determine the effect of Omega-3 fatty acids on anxiety disorders and injuries in professional football players. It is designed to help adults interested in obtaining all the benefits of Omega-3 fish oils from a high intensity therapeutic support.

The novelty of this formula is that it delivers increased amounts of nutrients(EPA and DHA) that maximize the potential benefits while reducing the number of necessary doses.

1) Ultimate Omega at a Glance

Ultimate Omega owes its therapeutic effects to a blend of Omega-3 fatty acids, including EPA and DHA.

EPA’s main claimed benefits target the heart and the circulatory system due to its anti-inflammatory effect. Chronic inflammation is believed to be one of the main causes of cardiovascular disease. EPA based supplements are used in the treatment of coronary heart disease, and to lower cholesterol, triglycerides, and high blood pressure.

DHA is more important for the development and functioning of the brain. Large amounts of DHA are present in the neuron membranes phospholipids. Studies researched the potential benefits of DHA in reducing symptoms of Alzheimer’s disease, a progressive condition that affects over 26 million people today with no viable treatment. Results are still being confirmed at this point. The compound is an essential nutrient for healthy cognitive development in infants in the first 3 years of life (starting with fetal development).

EPA and DHA based supplements may cause side effects like nausea, intestinal gas, nose bleed, skin rash or vomiting. In more severe cases a risk of prolonged bleeding may occur (because of the blood thinning properties of the omega-3s). For people who suffer from heart disease The American Heart Association (AHA) recommends ma maximum 1 gram per day of combined EPA and DHA .

One of the main characteristics of Ultimate Omega, as it is advertised, is its uniqueness when it comes to price and the concentration and purity of the formula. Tests conducted by the International Fish Oil Standards (I.F.O.S) prove its potency as they found a number of fatty acids (EPA and DHA) in this product to exceed the labels, thus proven that people are receiving more than what they pay for when it comes to Omega 3 quantity. However, people should be aware that there is a possibility of risk when it comes to Omega-3 overdose.

Omega-3s are believed to be important when it comes to reducing inflammation in the blood vessels, the joints and some other places throughout the body. Because Omega-3 supplements can cause the blood to thin as well as excess bleeding, they are not recommended for people who are taking anticoagulant drugs. Along with Omega-3 fatty acids, Omega-6 fatty acids are necessary for healthy brain functioning as well as growth and development. Known as polyunsaturated fatty acids, they have the property of stimulating skin and hair growth, regulating metabolism, maintaining the reproductive system and maintaining bone health. However, not enough studies have been done to support the validity of this information.

Ultimate Omega is an affordable supplement, sold by bottles containing 60,120 or 180 soft gels. It can be purchased directly from the manufacturer’s website with no shipping costs or a number of online retailers. Some retailers may also offer discounts and promotions.

Ultimate Omega is recommended in doses of 2 softgels daily with food, or as directed.There is no information about the use of the formula by pregnant/nursing women. No drug interaction is mentioned, but Omega-3 fatty acids usually interact with medication for high blood pressure and medication that slows blood clotting.

Ultimate Omega offers a total amount of 1280 mg Omega 3 fish oils, delivering 650 mg of EPA and 450 mg of DHA. These amounts are higher than what most competitors’ products feature, which increases the possibility of it being more effective. The active ingredients are described as purified and free of contaminant substances.

The formula doesn’t contain any artificial colors or flavors, milk derivates or gluten. Additionally, Ultimate Omega features a reduced amount of vitamin E derived from soybean oil, with extra antioxidant and health enhancing benefits. As opposed to similar formulations, this is a researched product shown to have real benefits on the heart, lipids and glucose levels. Nevertheless, it is always best to consult a healthcare professional who can recommend supplements according to the specific needs of each individual.

One of the best Fatty Acids [Blend] products we've come across in years is HCF® Happy, Calm & Focused. Without a doubt, HCF can offer more in terms of improving focus, energy, and attention than any other product we've reviewed. 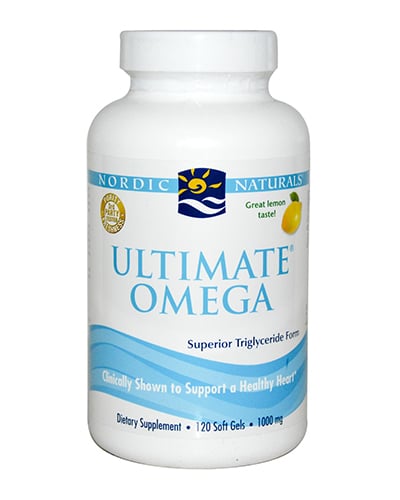 Q:
What is Ultimate Omega?
A:

Ultimate Omega is advertised as one of the best concentrated fish oil supplement. According to the company, the product is manufactured in Norway, close to the natural fish source. Nordic Naturals' mission is to deliver pure and great-tasting omega fish oils that promote optimal health and wellness. Ultimate Omega contains 70% pure Omega-3, and is purified through molecular distillation to ensure the absence of impurities including PCBs and heavy metals. All Nordic Naturals products surpass the highest natural and international pharmaceutical standards for freshness and purity, and are free from heavy metals, dioxins, and PCBs. The recommended dosage is: two soft gels daily, with food, or as directed by your health care professional or pharmacist.

The majority of people claimed that Ultimate Omega proved effective in their health improvement process. Even though it is not certain that this product definitively improves the above-mentioned aspects, it represents a possibility in helping the good functionality of the entire body. Ultimate Omega is advertised as offering a larger Omega-3 quantity than other supplements of the same type on the market. Therefore, even though there are less expensive products, they may not provide the same quality.

Are you looking for an exceptional fish oil? You just have found it! Concern me, I love Nordic Natural Omega 3 supplements, they are of very high quality, and mercury free.

Simple to take! I would recommend this to a friend, best brand out there!