Super Ginkgo is a dietary supplement based on a standardized extract of Ginkgo Biloba advertised to support memory and to promote peripheral circulation to the arms, legs and brain. The manufacturer, Solgar, is a nutritional supplements company founded in 1947.

Today, the company operates a modern manufacturing facility in New Jersey, and distributes its products all over the world, in over 60 different countries. Their product range includes targeted products such as kosher and vegetarian, as well as a wide range of vitamins, minerals and formulas which aim to treat specific health conditions.

The product is formulated exclusively for adults. People taking any kind of medication, people who have a medical condition, pregnant and nursing women are advised to consult a physician prior to use. In addition, Super Ginkgo is a vegetarian, Kosher certified product therefore can be used by specific groups of consumers.

1) Super Ginkgo at a Glance

Super Ginkgo is based on a blend of Ginkgo Biloba extract of 50:1 and leaf Ginkgo Biloba powder. The formula is advertised as free of free of sugar, salt, corn, yeast, wheat, soy, and dairy products and is formulated without the use of preservatives, flavors or colors of any kind.

The formula contains an extract of Ginkgo Biloba of 50:1, a standardized extract which contains two of the more than 40 active components found in Ginkgo: Ginkgo Flavone glycosides (24%) and Terpenes lactones (6%). This extract eliminates many other constituents (bioflavonoids, ginkgolic acids etc which may cause side effects), and it is this extract that is tested for efficacy and safety before being used in clinical trials.

The Flavone glycosides is believed to contribute to the antioxidant activity of Ginkgo Biloba, whereas the Terpenoids are associated with increased circulatory activity to the brain and periphery circulation, as well as protective properties for neurons.

An extensive collection of evidence exists for the use of Ginkgo as a medicinal agent, from its use as a treatment against age related cognitive decline to treatment of conditions caused by poor circulation in the body extremities (such as claudication which affects the legs). Caution must be taken in patients with blood clotting disorders as well as with those taking anticoagulant medication or MAO inhibitors.

Due to its positive effects on the vascular system, Ginkgo biloba is gaining recognition as a brain tonic that enhances memory. Although products containing Ginkgo biloba extracts have been used as a treatment in cases of Alzheimer’s disease and dementia, its Effectiveness has yet to be proven.

The largest study regarding Ginkgo Biloba’s efficacy was conducted by the Journal of the American Medical Association (JAMA), has demonstrated that supplements incorporating this herb have little to none effects in reducing the incidence of all-cause dementia or Alzheimer. However, a similar study concluded that Ginkgo biloba containing supplements were significantly superior to the placebo in patients with neuropsychiatric symptoms.

Some reports supported by clinical trials state that Ginkgo biloba has proven to be effective in cerebrovascular insufficiency due to its property as a blood thinner. This disease consists of insufficient blood flow to the brain and manifests itself through headaches, memory deficiency, and disturbed concentration. Since Ginkgo biloba helps increase the blood flow to the brain, treatments including Ginkgo biloba extracts have been proven efficacious against this condition.

Supplements containing Ginkgo Biloba extracts are not recommended for individuals suffering from circulatory disorders due to its anticoagulant properties. Possible side effects of Ginkgo biloba include dizziness, headaches, and gastric distress.

5) What You Need to Know Before Taking Super Ginkgo

6) How Much Does Super Ginkgo Cost?

Solgar Kosher FP Ginkgo is one of the most affordable herbal supplements available on the market. This product can be found on the manufacturer’s website. It is sold in bottles containing 120 vegetable capsules and using the recommended daily dosage; a bottle should last six months. Other online retailers might offer discounts and promotions.

There are no consumer reviews available online on Super Ginkgo. The manufacturer mentions no potential side effects. The recommended dosage is 1 tablet taken twice daily.

8) Our Final Take On Super Ginkgo

Super Ginkgo is one of the many Ginkgo Biloba based memory assisting formulas on the market. This particular formula is also Kosher certified and vegetarian, making it accessible to specific categories of patients. Ginkgo is today one of the most intensely researched herbal medicines, research which began in the 1960s in Germany.

Super Ginkgo contains a standardized preparation of Ginkgo, one which has been tested for efficiency and safety and that was used during research and clinical trial. And whereas many of its beneficial effects still need large scale human trials in order to be acknowledged and regulated as such, Ginkgo has been show to support memory in healthy individuals. This is why the formula has a high probability of working and achieving its goal. Unfortunately, consumer testimonials do not exist to validate the claim.

There are some precautions and drug interaction warnings which should not be ignored; hence, we recommend caution.

Trying to improve focus and get your health back? Try a supplement expressly designed for brain health and focus.
Featured

If you want to give HCF® Happy, Calm & Focused a try, you can get a free sample for a limited time. 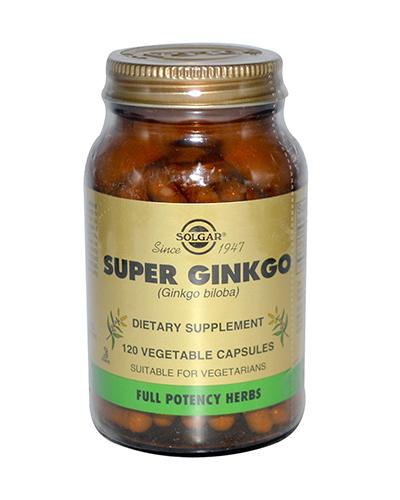 Q:
What is Super Ginkgo?
A:

Solgar Kosher FP Super Ginkgo is a product meant to aid in memory, improving circulation and possibly aid for Alzheimer's. Solgar Kosher FP Super Ginkgo is offered to you by The Plaza. The active ingredient is Ginkgo Biloba, a plant renown for its results in herbal medicine. Notice that this product is sugar and salt free and does not contain any kind of flavors, colors or preservatives. If you are pregnant or nursing you should take the advice of your healthcare practitioner before use.

Q:
Does Super Ginkgo work?
A:

Ginkgo biloba containing supplements are believed to increase metabolism efficiency and boost oxygen levels in the brain, thus improving memory and cognition. Most people have found success when using such supplements. Solgar Kosher FP Super Ginkgo is advertised as a supplement that can help in problems concerning mental enhancement and circulatory disorders. However, there isn't sufficient information made available to establish its efficiency.

This helped me, as a student I find it good for learning and improving memory capacity.