Spirulina Azteca features an extract of the blue-green algae Spirulina and is advertised to support brain function, kidneys, assist with detoxification and provide high protein content. The formula is manufactured by Health Force, an American company with an extensive market experience (more than 20 years). Health Force is committed to manufacturing high potency and purity herbal formulations at affordable prices. Their products include sports nutrition, whole foods, dietary supplements and detoxification formulations. The company takes pride in its numerous targeted formulations, which include raw and vegan products among others.

The manufacturer offers little information on the precise ailments Spirulina Azteca is designed to assist with. However, there is a lot of research-based information on Spirulina uses which we will detail in the following sections.

Spirulina Azteca contains a powder of the fresh-water growing algae Spirulina, a plant which contains high concentrations of amino acids (more than 50% protein), B vitamins, chlorophyll, and other vitamins (A, K and E), and minerals (Iron, Zinc, Copper, Selenium, etc). Spirulina is hence sometimes referred to as a superfood. Research indicates benefits on the immune system, with detoxification and with supporting liver function. Due to the content of vitamins with potential antioxidant effect, the B vitamins, and fatty acids, Spirulina enjoys increased attention as a mental health and cognitive function enhancer.

Evidence shows that the algae may have a positive effect on mental awareness, memory, and nervous system protection as a result of its antioxidant effects. Several trials on animals seem to indicate Spirulina supplementation may help protect the brain from dementia and Alzheimer’s disease. Other uses being investigated include PMS, depression, anxiety disorders, neuropathic pain, Chronic Fatigue Syndrome and many more.

Spirulina adverse effects are generally mild and usually occur when people suffer from an underlying condition. Such side effects include fever, gastrointestinal problems, and edema.

Adults are recommended taking 1 to 6 tablespoons of powder of Spirulina Azteca daily. The majority of consumers report increased quality and satisfaction with using the formula.

The blue green algae Spirulina has been used for centuries as a whole food and its medicinal properties have been confirmed by modern science. The alga is packed with nutrients including proteins, more than 100 hundred vitamins, minerals, amino-acids and enzymes. Spirulina Azteca received several positive reviews, with consumers claiming the product does what it is advertised. Also, the formula comes in the form of a dissolvable powder, which gives consumers numerous administration possibilities. To the formula’s potential success contributes the fact that it is organically grown and carefully processed to preserve most of its nutritional elements. 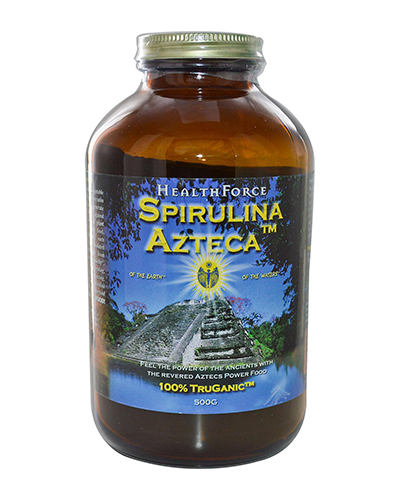