Shock Therapy is advertised as a dietary remedy which focuses on offering beneficial nourishment to power-lifters, bodybuilder, athletes, or other sport performers either professional or amateur, in order to improve their physical performances throughout workout and keep the health of the body as well as muscular endurance. This remedy has been designed and it’s currently being sold on the natural supplementation market by a business named Universal Nutrition.

The company was founded in 1977 with the purpose of providing natural products of high quality featuring optimal formulas which are delivered through bottles at prices which should be affordable for everyone who desires to follow any of their treatments. Their main areas of interested when it comes to customer satisfaction are service, reliability, quality, innovation, and responsiveness. As compared to other businesses, they provide on their official webpage certain explanatory articles about the ingredients they use and the impact of some of their supplements on the human body.

Shock Therapy is in fact an enhancement of a past formula which had the same name, but lacked multiple flavors and some of the minerals and vitamins. Moreover, the new improvements is claimed to make the supplement more accessible when it comes to increasing the people’s energy levels.

Advertised as a remedy suggested for either professional or amateur athletes that require a daily energy boost and protection of the muscular tissues, Shock Therapy contains a multitude of ingredients which have been categorized on the label in four main complexes that are Proprietary Formula, Enertropic and Antioxidant Complex, Muscle Strength Blend and, Electrolyte and Delivery Complex. Because of this, particular areas of the organism are affected and some of the components found in each are known for having a positive impact. In comparison to other formulas, this one has some patented ingredients.

Some of the ingredients in Shock Therapy which are found in slightly higher quantities are the branded-chain amino-acids such as isoleucine and leucine. They were included in this formula because recent research revealed their anabolic and anti-catabolic properties that are beneficial for the organism throughout the pre-workout sessions. Their role is to improve protein synthesis and facilitate the hormonal increase. Within the hormones that are affected growth hormone, insulin and IGF-1 may be mentioned, thus the response of the organism to outside stimulation as well as free radical damage is improved and some infections and inflammations may be prevented. So far, there haven’t been any serious reported side-effects on the utilization of remedies that have branded-chain amino-acids.

Shock Therapy is advertised as a dietary remedy created by a business with increased experience on the nutritional market which surpasses thirty years. It is suggested specifically for people that have intense workout sessions such as bodybuilders, athletes, or power-lifters. It features a wide array of components among which there are vitamins, minerals, and amino-acids found in percentages varying from ten to one hundred of the daily suggested. Even though there are no restrictions presented on the website, pregnant or lactating females as well as people with known allergies to any of its components should consult a personal healthcare provider prior to the beginning of the treatment with Shock Therapy.

This product is excellent! The fruit punch taste pretty good, gives me perfect amount of energy, makes me feel good and gives me more drive at the gym. 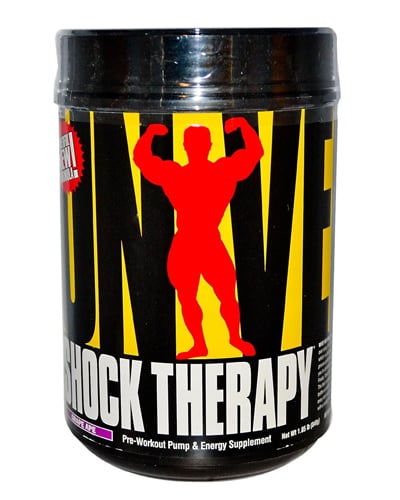