Sheer Thermogenic is advertised as an out of the ordinary fat burner. The formula is produced by Sheer Strength Labs, an American manufacturer of sports nutrition products.

This formula is said to accelerate fat burning, support muscle definition and improve metabolic rates thanks to a blend of highly effective substances that were included in it. Caffeine, 5-HTP, Yohimbine, or Green tea Catechins are only a few of the active chemicals effective in removing belly fat, increasing adrenaline levels, and providing the necessary energy for higher intensity and more effective training.

Sheer Strength Labs claims their unique blend of ingredients is highly superior to any of the competitors formulations with similar advertised benefits. The producer also says each ingredient is hand-picked to create maximum benefits for their users and that the potency of the formula is guaranteed. However, unsatisfied customers can get their money back if the formula will not meet their expectations.

1) What is Sheer Thermogenic?

Sheer Thermogenic is based on a relatively low number of ingredients including the popular Caffeine and Green tea extract.

Green tea Catechins are a type of flavonoids that have been attributed with high fat-burning qualities. In fact, green tea’s antioxidant properties extend far beyond these particular effects, and traditional medicine fully supports the large variety of benefits. Green tea is believed to help in preventing and/or treating: cancer, heart problems, high cholesterol, diabetes, overweight problems, skin problems (psoriasis), and neurodegenerative conditions. Green tea also acts as a tonic, essential for those who want to boost their energy and mental sharpness.

Synephrine and Fucoxanthin are two ingredients included in this product for their capacity to boost metabolism and increase calorie burn.

Forskolin also boosts fat burning effectiveness, increases metabolic rates, and protects the muscle while enhancing the effectiveness of the stack.

Hordenine supports optimal adrenaline levels and helps maintain 5-HTP stacks. 5-HTP decreases appetite and reduces cravings, as it the precursor of the neurotransmitter Serotonin, a substance that plays a key role in regulating appetite and mood.

3) Does Sheer Thermogenic Work and it is Safe?

The first listed ingredient is Caffeine, which is in fact the most consumed substance in the planet. It is a well-known energizer widely researched for its numerous potential health benefits in humans. Among the most common benefits identified by researchers lie the memory boosting and energizing effects. The substance can positively affect both mental and physical energy. However, tens of other uses of caffeine were discovered as results of the clinical research revealing that Caffeine is beneficial in many additional areas. For example it was discovered that caffeine can replenish muscle glycogen concentrations after exercise (if combined to proteins) and speed recovery after exercise by relieving post-workout soreness. However, consumption of caffeine comes with its risks. It has been shown that caffeine increases blood pressure, can lower bone mineral density in women, or cause insomnia, tremors, and heart palpitations particularly if high doses are consumed.

Another popular ingredient of weight-loss pills also included in this product is 5-HTP. This is a natural chemical usually extracted from the seeds of Griffonia simplicifolia, and a direct precursor of the neurotransmitter Serotonin. Serotonin is also known as the “mood ” neurotransmitter. Low levels of Serotonin have been associated with mood disorders like anxiety, depression, and insomnia. The chemical also plays important functions in the regulation of appetite, temperature, sexual behavior, muscle contraction, and cardiovascular and endocrine functions. So by replenishing Serotonin levels, 5-HTP becomes a key substance in patients who suffer from mood problems, headaches, and eating disorders (including for those suffering from obesity).

Synephrine, another ingredient is believed to increase metabolic rates and caloric expenditure while also supporting the maintenance of high energy levels. The substance is not as popular as the ones mentioned above, but its effectiveness is supported by those who have used products containing this substance.

The standard price for a bottle containing 60 capsules is $50 (according to the price listed on the official page of the manufacturer). However, at the time of this review, the formula is on sale and costs only $30. One bottle ensures a full month’s requirements if used regularly and in the suggested dosage (no more than 2 capsules per day). There’s no mention of a free trial period but it seems like the producer offers a money-back guarantee for this product.

This weight-loss supplement looks like a good quality product able to support a more rapid fat-loss. The ingredients appear to be natural substances which were involved in numerous clinical trials that support their benefits in the weight management sector.

The formula also benefits of the consumers approval, although the number of testimonials isn’t that large. Considering the manufacturer is a company founded no more than 2 years ago, it is possible that not many people heard or had the chance to use this supplement yet.

Sheer Thermogenic is formulated to address particular brain health needs. If your needs differ or you are looking for calm and focus, consider other options.
Featured

Among the best natural supplements for focus, attention, alertness, and clarity is HCF® Happy, Calm & Focused. We love that HCF uses only high-quality nutraceutical-grade amino acids and associated neuro-nutrients to ensure purity and standardized for maximum effectiveness.

So you can see what HCF® Happy, Calm & Focused offers, the company behind the product is granting all BrainReference readers a free sample now. 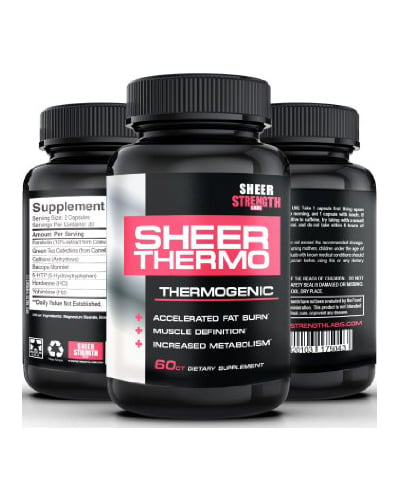 clear
Q:
What does Sheer Thermogenic contain?
A:

Q:
Sheer Thermogenic is all about what?
A:

Sheer Thermogenic is advertised as a powerful fat burner that not only accelerates fat burning, but also increases metabolism and helps with muscle definition. The producer of this nutritional supplement is Sheer Strength Labs, a company founded recently specialized in developing and commercializing sports nutrition supplements.

This formula is designed for physically active individuals or people who deal with weight problems and want a proper support for losing unwanted pounds more efficiently. The active ingredients are plant based extracts and include popular compounds like Caffeine, green tea Catechins, Yohimbine, or Synephrine. These substances have been shown to boost metabolism and fat burning effectiveness, enhance adrenaline levels, and maintain the energy levels for more intense workout sessions and better results.

The formula is currently on sale on the official page of the manufacturer, and as well on other online retailers.

Sheer Thermogenic main claims are accelerated fat burn, muscle definition, and increased metabolism. By looking at the ingredient list, we definitely see many of the common ingredients used in weight-management products and sports nutrition supplements. The active substances are individually researched and shown to provide certain benefits related to those stated by the manufacturer. Still, let's not forget that the use of these substances has also been associated with unwanted side effects that shouldn't be overlooked. On the contrary, we strongly recommend those interested in buying to formula to ask a professional opinion before making a final decision.