Sheer Alpha is a nutritional supplement designed to fulfill the specific needs of men. The formula is advertised as a potent energy booster designed to also improve sexual function and physical performance in adult men. Sheer Strength Labs, the company behind this supplement is a new player on the sports nutrition market. They are currently commercializing less than 10 formulations that seem to be well-received by customers.

Sheer Alpha formula is marketed as a product able to heighten all experiences, whether we’re talking about sexual performance, mental energy, or physical strength. The product is based on a combination of herbal extracts that have been used in traditional medicine as aphrodisiacs and natural energizers.

The formula works primarily by increasing testosterone levels, the key male hormone that participates in multiple processes throughout the body. This chemical messenger helps regulate libido, create muscle mass and strengthen the bones, maintain a healthy cardiovascular system (by participating in red blood cell production), and improve mood. Low testosterone levels in men (hypogonadism) have been associated with infertility among other health problems.

Studies revealed that icariin is an effective PDE5 enzyme inhibitor (the main cause for erectile dysfunction) and that it can also improve testosterone production considerably (observed in animal studies).

Maca, the second ingredient listed has also been traditionally used to improve fertility and enhance sexual function. The herb is currently used to increase libido, improve semen quality, or relieve symptoms of menopause. Clinical evidence is not strong enough, so many researchers believe that the claimed benefits are exaggerated. However, there are several human studies support the plant’s effectiveness in improving sperm count and fertility in some men.

Tribulus Terrestris or Devil’s weed is also believed to improve testosterone levels, but the benefits depend on the species (numerous known species have been discovered). So it is very important to check if the source is reliable and that it contains a potent amount of saponin protodioscin which is the chemical that gives its sexual enhancing properties. The formula also contains Ginkgo Biloba, a very popular cognitive enhancer and energy-booster used on a large scale in the nutritional supplements industry.

Given the information we were able to find, it looks like Sheer Alpha relies mostly on ingredients that have been used traditionally as sexual enhancers and not on scientific evidence. We’ll let you decide if the fact that the active substances are not 100% proven effective is reason enough for not buying the product.

The formula is sold online directly by the manufacturer and as well by several partners. At this time the manufacturer offers a discount of 25%. Currently the product can be purchased for $59.97 from Sheer Strength Labs web-page, but we have found that the online retailers sell it at lower prices. So we advise potential consumers to make a detailed research before deciding where to buy from.

Sheer Alpha also comes with a 100% money-back guarantee. The refund procedure can be read by accessing the “Terms & Conditions” section at the bottom of the web-site.

Sheer Alpha contains two more ingredients with testosterone boosting properties, namely Maca and Tribulus Terrestris while Eurycoma Longifolia has been shown to improve sperm count and act as a powerful aphrodisiac. The latter is also researched for its antiulcer, antimalarial and antitumor activity; most of the studies that are ongoing at this time are in vitro.

Sheer Alpha appears to be a safe formulation, but the active ingredients benefits are not completely supported by clinical evidence. Some of them haven’t been sufficiently tested in human trials, so please be careful at any adverse reaction you might experience. The best approach is to follow the doctor’s advice and use Sheer Alpha only if he/she recommends as safe.

Consumers testimonials, although not numerous, appear to be generally positive. Users experienced increased energy levels, better sleeping patterns, and enhanced focus and sexual drive. Like most supplements out there Sheer Alpha is not a clinically studied product, and in this case the consumers opinions are the best way of assessing a drug’s potency.

If you want to build brain health and improve overall vitality, we encourage you to go with a program that can help you feel calmer and focused.
Featured

Among the best natural supplements for focus, attention, alertness, and clarity is HCF® Happy, Calm & Focused. We love that HCF uses only high-quality nutraceutical-grade amino acids and associated neuro-nutrients to ensure purity and standardized for maximum effectiveness.

HCF AminoScience has decided to give all BrainReference visitors free sample of HCF® Happy, Calm & Focused, as a sign of confidence in their supplement. It's only available for a limited time though, so make sure to take advantage while you can! 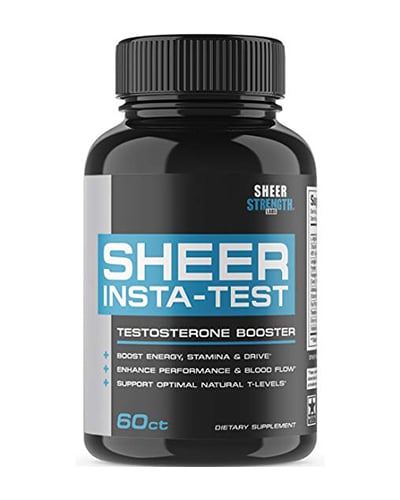 clear
Q:
What are the core ingredients in Sheer Alpha?
A:

Q:
What is Sheer Alpha supplement?
A:

Sheer Alpha is a dietary formula based on a blend of 6 herbs that are claimed to improve performance at work, in the bedroom, and at home. The company behind the formula is Sheer Strength Labs. This supplement works by increasing testosterone levels and enhancing energy. An increase in testosterone, the key male hormone results in more muscle mass, improved stamina, better sexual performance, and enhance sexual drive. The key ingredients known to positively influence testosterone are: Horny Goat weed (Epimedium), Maca (Lepidium Meyenii), and Tribulus Terrestris, while Ginkgo Biloba ensures that energy levels remain at optimal levels as well. The formula is sold online for a relatively high price, but the good news is you can probably purchase at a discounted price which is lower than the standard price by up to 40%. Please be careful that some online retailers sell the formula cheaper than the manufacturer on its official site.

Sheer Alpha contains a number of active ingredients used on a large scale in traditional medicine to treat sexual dysfunctions and increase testosterone levels in men. However, although there are many supporters of the benefits brought by these herbs, there simply isn't enough scientific evidence resulting from human trials to back-up the claims of those who sell the products as sexual enhancers, aphrodisiacs, or energy boosters. On the other side, many of the dietary supplements sold today are not proven effective, while some of them have raised numerous controversies among medical doctors and scientists all over the world. It is why we recommend taking the advice of a specialized doctor before making the purchase. He/she is the only person who is authorized to recommend or forbid the use of the formula based on the patient's medical history.