SFP Ginkgo Biloba Leaf Extract is an herbal supplement advertised to promote optimum memory function, treat mild cognitive impairment and old age memory loss, as well as to support peripheral circulation to the arms, legs and brain.The manufacturer is a U.S. company founded in 1947. Since then, the company has developed numerous products and innovative formulas such as Nutri-Nano CoQ-10 3.1x or Vision Guard. The company operates a modern manufacturing facility in New Jersey, and distributes its products in more than 60 countries worldwide. Their company’s product portfolio includes condition-specific formulations and products for special categories of consumers such as kosher and vegetarian.

The formula is recommended to adults. SFP Ginkgo Biloba Leaf Extract is cautiously recommended to pregnant and nursing, people with an underlying condition or those taking other types of medication.

Ginkgo Biloba is known for its blood flow enhancing and antioxidant properties, giving it a wide range medical applicability. Most commonly, it is used to prevent age related memory loss and to promote a healthy brain function, particularly memory. It can also be used to relief anxiety disorders symptoms, depressive mood and as part of Alzheimer’s treatment and dementia treatment.

The various compounds found in Ginkgo may also prevent cell membrane and cell membrane decrease in fluidity damage caused by free radicals, considered as some of the causes of Alzheimer’s disease.Mild side effects are associated to Ginkgo Biloba such as upset stomach, headache, constipation, dizziness and forceful heartbeat.

Solgar Kosher SFP Ginkgo Biloba is a dietary supplement intended to improve mental clarity. Most studies demonstrated that people using Ginkgo Biloba had shown improvement in blood circulation. Due to its positive effects on the vascular system, this herb has been gaining recognition as a brain tonic that enhances memory.

Products containing Ginkgo Biloba extracts have been used in trying to treat Alzheimer’s disease and dementia. Clinical trials have demonstrated that supplements incorporating this herb have little to no effects in reducing the incidence of all-cause dementia or Alzheimer.

Due to its property as a blood thinner, clinical trials have proven that Ginkgo Biloba is effective in cerebrovascular insufficiency, a disease that manifests itself through memory deficiency, headaches, and disturbed concentration. Also due to this property, Ginkgo Biloba is not recommended for individuals suffering from circulatory disorders.

Some side effects associated with the use of Ginkgo Biloba include dizziness, headaches, and gastric distress.

Solgar Kosher SFP Ginkgo Biloba is an affordable supplement, sold in bottles containing 180 vegicaps, designed to last 3-6 months. The product is available for purchase on the manufacturer’s website.

7) How to Use SFP Ginkgo Biloba Leaf Extract

The number of consumer reviews is limited. The recommended dosage for SFP Ginkgo Biloba Leaf Extract is 1 up to two times daily. No side effects or other warnings are mentioned by the manufacturer.

SFP Ginkgo Biloba Leaf Extract uses a standardized extract of one of the most popular and frequently prescribed memory enhancing herbal ingredient: Ginkgo Biloba. Memory disorders such as mild cognitive impairment in the elderly, old age memory loss, dementia or Alzheimer’s disease are some of the most frequent conditions affecting mental and brain function.Much research is hence concentrated in identifying prevention and treatment alternatives, and Ginkgo Biloba seems to be an efficient one. The formula offered by Solgar has not received many reviews, therefore it is difficult to assess the extent of its effectiveness.

We do know however that Ginkgo Biloba may have certain side effects and interact with other medication; therefore, we advise that you ask a healthcare provider’s opinion before use.

Do you want to regain focus and improve overall wellness? Consider a program designed specifically to help you with not just brain health, but focus and clarity specifically.
Featured

When it comes to emerging quality standards in the supplement industry, HCF® Happy, Calm & Focused is one of the best products we've seen in years. Its unique FQ formula (15+ high-purity, nutraceutical-grade amino acids, and associated neuro-nutrients) offers a lot in supporting focus, attention, mood, and energy. 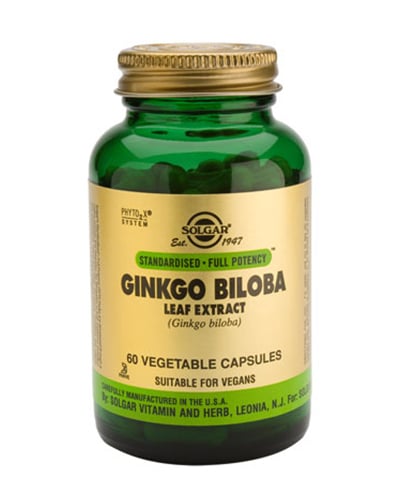 clear
Q:
What are the active ingrediens in SFP Ginkgo Biloba Leaf Extract?
A:

Q:
What is SFP Ginkgo Biloba Leaf Extract?
A:

Although there is a lot of controversy regarding the Effectiveness of Ginkgo Biloba extracts supplements, consumers are mostly pleased with the results they achieved through these supplements. Since Ginkgo Biloba is one of the most popular herbs at the moment, many clinical trials have been performed to prove its efficacy. However, most of them vary in results.

waste… waste of time, waste of money, waste of patience, waste of everything!!! no results in one week and a half. i just need my focusing problems to be dealt with, i don’t want or have time to wait! this product is inefficient

Results come in after atleast 2 weeks of use, so if anyone is using this and sees no results, just calm down, it takes time, but atleast there are some positive effects.

i tried this leaf extract and it helped me a great deal! if you are having memory problems, use this! it works!