Focus is a brain supplement advertised as a potent solution for individuals who want to achieve greater mental performance. Scintillant Nutrients, the manufacturer of this formula is an unknown producer and because it doesn’t have an official web-site, we couldn’t find very much information about its history. The formula is advertised as produced in USA in facilities that comply with the FDA regulations. No other details about the company’s activity, location, technologies, or compliance with quality standards are available at this time.

The formula is not by far an original product. In fact we identified at least 4 other supplements that contain very similar (some even identical) ingredients in the same amounts. We have seen similar products before, but products with identical list of ingredients are too much of a coincidence. We will further analyze the ingredients of this formula to see if they are scientifically proven effective in supporting brain activity, as claimed by the producer of this formula.

The formula is based on several herbal ingredients and several other brain nutrients designed to work synergistically. Ginkgo Biloba is the first listed ingredient. It is a very popular substance of dietary supplements mostly prescribed as brain or circulatory system boosters. Research involving the herbal extract is abundant, but scientists believe there is still a long way to proving its complete safety and effectiveness in treating conditions like: Alzheimer’s disease, cancerous tumors, intermittent claudication (reduced blood flow in the legs), anxiety, or eye disorders like glaucoma.

An ingredient of non herbal origin is Acetyl-L Carnitine. It is considered an essential chemical for energy production. Carnitine occurs naturally within the body. The substance is also responsible for transporting toxins out of the cells, preventing their accumulation. Acetyl-L-Carnitine, a form of Carnitine, is involved in the production of an important neurotransmitter called Acetylcholine. The latter is a key brain chemical considered responsible for the maintenance of alertness and memory. Supplemental Acetylcholine has been administered to patients with Alzheimer’s disease and early studies suggest it may improve memory and stop progression of this incurable disease.

3) Does Focus Work and it is Safe?

The formula is based on the properties of several herbal extracts and several brain nutrients believed to have a high impact on brain performance.

The first ingredient listed is Ginkgo Biloba, which is an extract of one of the oldest living tree species. The herbal remedy has been used in traditional medicine for thousands of years to treat a broad spectrum of illnesses including pulmonary conditions (bronchitis), allergies, or asthma. Today, Ginkgo is mainly prescribed as a brain booster and natural blood thinner. The extract is however used to treat and prevent numerous health problems, from neurodegenerative conditions to various types of cancer.
Research has discovered that Ginkgo is made of several types of compounds that ultimately provide its beneficial qualities. Flavonoids are on type of chemicals. They have been shown to exert powerful antioxidant action which slows down the ageing of cells, including those of brain cells. Ginkgolides and Bilobalides are two other active compounds from Ginkgo that have been observed to prevent the formation of blood clots and improve venous circulation. These compounds also prevent platelet aggregation, a harmful process that often leads to the shrinking of arteries causing poor blood circulation and ultimately stroke. Dosages of up to 1500 mg per day of Ginkgo Biloba are considered safe, but gradual increase of the dosage is highly recommended. The main concern when taking Ginkgo supplements is the risk of bleeding (due to it blood thinning effect), particularly when combined with other anti-clogging medication (like Warfarin)

Phosphatidylserine is the second listed ingredient in this formula. It is also a naturally occurring chemical in the human body. Research indicates that the brain needs adequate amounts of Phosphatidylserine to function properly and that the levels of this substance in the neuronal tissue decreases with age. Studies demonstrated that PS can improve symptoms of ADHD in children, short-term memory, and alertness, reduce stress, and prevent cognitive decline. Some studies were made in vitro or on animals, so it is possible that human trials will not reveal the same positive results. Another thing to keep in mind is that most of the studies involved the animal based extract (obtained from the brain of cows) which is currently unavailable due to existing suspicions of virus and bacteria transmission to humans.

All the other ingredients in Focus have been shown to have some benefits on cognition and mental balance in humans. However, in each case, scientific evidence is insufficient and sometimes controversial results were found.

5) Precautions of Focus Use

6) How Much Does Focus Cost?

Focus is now sold by Amazon.com for $19.98 which is a discounted price. The standard cost of this supplement is $69.99 which places it in the high priced supplements category. A dose of 1-2 capsules daily is recommended, so 1 bottle will provide the necessary amount for 1 to 2 months of use.

7) How to Take Focus

Another very popular ingredient, St. John’s Wort is most commonly recommended as a natural antidepressant. The active chemicals found in large concentrations in this plant (namely Hypericin, Hyperforin, and Pseudohypericin), are thought to be the major sources of the plant’s antidepressant effect. These compounds work by preventing reabsorption of the main neurotransmitters related to emotional balance (Dopamine, Norepinephrine, and Serotonin) by nerve cells. The herb is currently used to treat symptoms of anxiety, menopausal mood swings, obsessive-compulsive disorder (OCD), premenstrual syndrome, and nicotine and alcohol withdrawal. More research is required in order to fully understand its long-term effects.

Focus is not an original formula, nor is it very popular among consumers. Those who have tried the supplement are not many and some of them seem to be completely unsatisfied with the actual experienced benefits. Please be careful at any adverse reaction that may be caused by some ingredients (Ginkgo Biloba or St. John’s Wort in particular) or by the interactions between the active constituents of other medication.

Our advice is to consult a doctor who is aware of your medical history and can correctly assess the effects of such a formula.

You're resolved to bring calm back into your life? Take a look at a supplement specifically formulated for calmness and clarity.
Featured

Yet how about our top pick for this year? There are lots of great brain supplements out there - right? When it comes down to quality and effectiveness, it's no wonder that our favored product is HCF® Happy, Calm & Focused. HCF unique FQ formula includes high-purity, clinically proven, nutraceutical-grade amino acids, and associated neuro-nutrients shown to support focus and mood.

Plus, since you’re a BrainReference reader, you can take advantage of a free sample of HCF® Happy, Calm & Focused for a limited time. 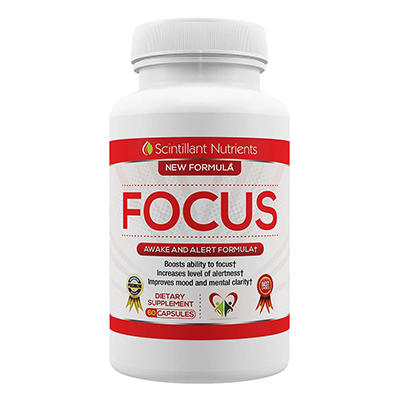 clear
Q:
What does Focus contain?
A:

Focus is a Nootropic supplement designed to improve brain function under various aspects (concentration, focus, mental energy, and memory). The manufacturer called Scintillant Nutrients doesn't have an official site at this time. No information about the company's history was found. The formula is a blend of herbs and brain nutrients claimed to work together and promote optimal cognitive performance and mood. Ginkgo Biloba, the first active ingredient listed is the one of the most popular substances used in brain supplements today. It is promoted as a very potent natural aid for those who seek to support brain performance, particularly memory, and improve blood circulation and circulatory system's health. All the ingredients within this formula are popular compounds at this time. However, scientific research for any of these substances has not reached conclusive results in terms of their effectiveness

Q:
Are Focus benefits actually a reality?
A:

The formula has the potential to help individuals who don't experience major cognitive problems, but people already under medication (particularly those with circulatory or heart problems), pregnant and nursing women, and couples who are trying to conceive are advised to refrain from using it. St John's Wort, one of the active ingredients can cause photosensitivity with symptoms like skin irritations and red eyes in people who are exposed to direct sunlight or tanning booths. As this is not a scientifically proven formula, we must rely our review on the existing evidence for each individual ingredient and consumer testimonials. As we've seen before, the scientific trials made on the active ingredients have shown contradictory results, so more research is needed still. The number of consumer testimonials is also relatively low and reading them we noticed that approximately 15% of users haven't experienced the benefits claimed for this formula. The best way of knowing if Focus is right for you is to ask your doctor as he or she is able to correctly evaluate the effect of such a drug given your medical history.