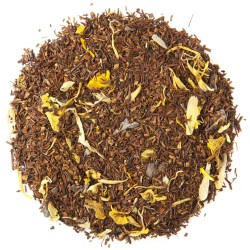 Rooibos or red bush is the common name for Aspalathus linearis, a member of the legume family growing in South Africa, and has been used in the area for generations to make tea. The plant was discovered in the 18th century by European travelers in the Cederberg region of South Africa and was first used as a replacement for black-tea by the Dutch settlers in the region. In the early 20th century, botanists became very interested in the curative properties of the plant and over the next decades the red-bush was successfully cultivated on a large scale.

The Rooibos plant has fine needle-like leaves and yellow flowers, but only the leaves of the plant are used to make tea. Depending on the method used to process the leaves, there are two kinds of rooibos: red-rooibos, made by oxidizing the leaves–a process that gives the reddish-brown coloration of the tea and enhances its flavor, and green rooibos, made from unoxidized leaves. The green variety is more expensive and slightly different in taste.

In more recent years, rooibos tea has become popular world-wide due to its pleasant sweet taste, but mostly due to its multiple health benefits. It’s been said that rooibos is “the new green-tea,” with some studies suggesting that its antioxidant content is up to 50% higher than those found in green-tea.

As previously said, rooibos tea has gained much attention in recent years, mainly due to its multiple health benefits. Overall, some of the claims around rooibos tea include, among others:

Like most tea, rooibos tea contains flavonoid components that act antioxidants. The main flavonoids found in rooibos tea are aspalathin and nothofagin. Nothofagin is a potent antioxidant and studies have showed that aspalathin may be more effective as an antioxidant that EGCG. A study in 2009 confirmed that rooibos tea presents antioxidant activity dues to high amounts of water-soluble polyphenols.

Another amazing benefit of the brew is its ability to regulate blood pressure. It contains angiotensin I-converting enzyme (ACE) inhibitors that act much like those used in treating high-blood pressure. A human study found that rooibos tea consumption inhibited ACE activity, confirming its benefits for the cardiovascular system. Another study on mice found that aslapathin suppresses fasting blood glucose levels and also improves tolerance to glucose by stimulating insulin secretion from the pancreas. A more recent human study conducted in 2011 in South Africa showed that rooibos tea consumption over a period of 6 weeks increased HDL cholesterol (or good cholesterol), while also leading to a decrease in LDL cholesterol (or bad-cholesterol) levels.

The immune system can also benefit from rooibos tea consumption. In 2001, a study on rats showed that administering rooibos tea led to improved antibody production, namely interleukin-2 (IL-2). This may have application in the prophylaxis of some disease like cancer, AIDS or other infections. In another study it was found that alkaline rooibos extract daily intake may suppress HIV infection.

Other suggested used for rooibos tea include treatment for liver disease. A study on rats exposed to prolonged intoxication found that administering rooibos tea led to less liver fibrotic tissue.  Also, it was suggested that rooibos consumption may improve skin conditions and skin healing.

All in all, rooibos tea seems the new wonder tea in town, with more potential benefits that the hugely popular green-tea. It contains nothofagin and aspalathin, two powerful antioxidants that so far were not found in other plants, it contains no caffeine, but still energizes the body and has a pleasant taste that even appeals to those who may not like green tea.

Although it is hard to think that a harmless tea may present side-effects, they key to all things is moderation. So far, no research is available that focuses on the long term effects or side-effects of rooibos consumption. There are however several known side effects like the slow absorption of iron in food. Because of its low levels of tannin, rooibos tea much like black-tea makes it difficult for the body to absorb iron in vegetables (not in meat). Therefore, it is recommended for people with iron deficiency to drink rooibos tea after meals and even consult with their doctor before including it in their daily diet.

Rooibos can also cause skin or breathing problems to those allergic or in case of overdose. These may present in the form of rashes, itchy or swollen skin, breathing difficulty, shortness of breath, and chest tightness.  In case any of these symptoms appear after consuming rooibos tea, a doctor should be consulted immediately.

Consumption during pregnancy and nursing may have several positive effects on the mother, but its effects on the child, especially when taken alongside other supplements, is unknown. It is best to consult a physician before starting regular consumption of rooibos tea if you are pregnant or nursing or for your young child.

Rooibos is indigenous to South Africa and is currently still grown only in a small area in Western Cape, South Africa. It is prepared only as an infusion from the fermented leaves (red-rooibos) or the dried leaves (green-rooibos).  Rooibos tea is prepared in the same manner as black tea or with lemon an honey as sweetener. Recently it started being used as a substitute for coffee in the form of “red expresso”, red lattes and red cappuccinos, based on concentrated rooibos infusions.