Puritan’s Pride Neuro-PS represents a product offered to the every-day customer with the intention of improving memory, sharpening mental focus, helping with learning abilities, while also promoting mental clarity. The business behind this remedy is called Puritan’s Pride.

Founded approximately 40 years ago with the stated mission of offering the finest quality nutritional supplements available on the market at the best value, Puritan’s pride, unfortunately, fails to offer information related to its ingredients, clinical studies, formulation specifics, or other information that may support their claims. The official website clearly stated that there is little evidence from the FDA when it comes to the fact that this supplement can help reduce risks of cognitive dysfunctions in the elderly.

Furthermore, the producer doesn’t list any potential side-effects that may appear when following this treatment, but it advises pregnant or lactating women to consult their personal healthcare prior to using this supplement. If adverse reactions appear, it is better to discontinue the treatment and consult the medical doctor.

The main ingredient of Puritan’s Pride Neuro-PS is Phosphatidylserine which is, in fact, a phospholipid that offers a physiological, structural as well as biochemical support to the cell membranes, specifically the ones in the brain. Although the claims of the manufacturer are that this formula should enhance memory, sharpen mental focus, support learning abilities, and promote mental clarity, there are few studies done on the ingredient and not on this product that may provide positive results.

For example, phosphatidylserine is currently used in treating the age-related decline in mental functioning, Alzheimer’s disease, attention-hyperactivity disorder, enhancing athletic performances and improving thinking skills in young people. Due to the fact that it is a chemical with numerous functions in the body, phosphatidylserine represents a part of the cellular structure, thus being a key for its maintenance, specifically the brain. Even though this chemical can be made by the body, it gets most of what it needs from foods. Although this ingredient was initially manufactured from cow brains, it is currently obtained from soy or cabbage because there was a major concern that the initial sources might have triggered infections like mad cow disease.

Despite the fact that it is possibly safe for most of the people, Puritan’s Pride Neuro-PS can occasionally cause side effects such as stomach upset or insomnia, specifically in doses over three hundred milligrams.

All in all, Puritan’s Pride Neuro-PS represents a product whose beneficial effects are based on a key ingredient called phosphatidylserine which actually gives the supplement part of its name. It was basically designed to enhance cognitive functions such as mind sharpening, memory, concentration, as well as thinking and learning abilities. It’s producer based the design on the fact that people lack proper levels of phosphatidylserine with age and because of this they require some form of nutritional supplementation. Even though the claims of its manufacturer put the product in a very good light, further research is required in order to generally determine the efficacy of Puritan’s Pride Neuro.

The main issue with synthetic ingredients is that you don’t always get what you pay for. In reality, synthetic ingredients are well known for their low absorption, poor bioavailability, and the fact that they drain the body’s reserves of other minerals and vitamins (e.g., cofactors) required for proper absorption of other nutrients.
read more
At BrainReference we recognize that dietary supplements can be the source of many allergic responses either due to cross-contamination with high-allergen compounds during the manufacturing process or because they incorporate ingredients obtained from high-risk allergenic foods (milk, eggs, or fish).
read more
Companies with less integrity will use dangerous fillers as a “grease or lube” to aid in easier and faster production. Artificial dyes and colors are used to make supplements more appealing to the eye. Coatings are added to make capsules easier to swallow. How do these fillers impact your body and health?
read more
Independent testing labs are not associated with the producing company, ingredients supplier, the company whose name appears on the product, or with the consumer. This means independent testing labs have no vested interest in the result of the testing and are less likely to “dry lab” or manipulate test results for self-serving reasons.
read more
Product rating (4.5 / 2)

My sleeping/going to sleep is really bad – might it have something to do with NEURO PS?

I’m a regular buyer of Puritan’s Pride products. In general I’m very satisfied with the quality of their products. However, the onus for determining which supplements to buy and their effectiveness rests solely with consumers. Neuro-PS Gold is a relatively expensive supplement compared to other essentials like Vitamin D & Magnesium. I bought the product when it was on sale, and quite frankly I’ve found no justification for a re-order. Further, I’ve had a prolonged bought of diarrhea for the past two months, and suspect one or more of my supplements as the culprit. [This deduction followed a visit to… Read more »

I found Neurons PS to be a decent supplement. I did increase focus and awareness. However I think it is wise to down dose off the supplement for a few months and then get back on it. It appears to be ineffective after long term usage, and it hampered my multi-tasking abilities because I had the urge to only focus in on one thing at a time. I also advise not to take too much, you tend to be more focused on one thing and pay less attention to what’s around you. That could be good and bad. Overall I… Read more »

I felt the difference and saw the results within days. This had the ingredients (PS+) that are proven to work at a good price offer.
This is the best supplement I have tried for brain function

Phosphatidylserine is a great supplement and in this blend, my mind was clearer and focused. Thanks!

I tried Neuro-PS, and it didn’t work. It would have depressed me, but I forgot about it. Having a bad memory ain’t so bad after all.

I’ve been taking this product for a week and recognize a slight improvement in mental clarity. As with all medications, supplements, vitamins and foods results or reactions will vary from one indivdual to another based on deficiencies or body chemistry. It is my belief that mental decline is a natural age related process and vitamin therapy may reverse or slow down this process if QUALITY ingredients are used (which are usually costly) in the formula. As in most cases you get what you pay for. To early to recommend this product but I will post postive or negative results after… Read more » 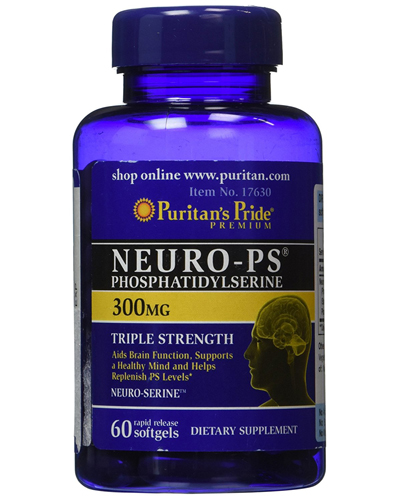