Puritan’s Pride DMAE is designed to provide the neuro-precursor DMAE (dimethylaminoethanol or dimethylethanolamine), an organic compound which promotes brain function. The company behind the product is called Puritan’s Pride, and is a business that enjoys more than 40 years of experience on the dietary supplements market. The manufacturer formulates and markets different supplements that include herbal extracts, multivitamin formulations, sports nutrition, health and beauty products and amino-acid based dietary supplements. The company is established in Long Island, New York, United States but they also have numerous production facilities located throughout the U.S.A.

According to the manufacturer’s statements, this product is was specially developed to improve concentration, vigilance and alertness. The formula is recommended for people over the age of 18, and for individuals who feel like their mental abilities and clarity have altered over time. The blend does not include artificial color, flavor or sweetener, preservatives, sugar, starch, milk, lactose, soy, gluten, wheat, yeast, fish or sodium. Unfortunately, there is little information about the product on the manufacturer’s website, which could be a problem for consumers.

Precautionary measures should be taken before using Puritan’s Pride DMAE if you have, or have had, a health condition or you are currently taking any medications or remedies, including OTC medications.

The key ingredient in this formulation is DMAE, which as stated above, is a natural metabolite in the body. This compound is related to the B factor choline and is known as a precursor to Acetylcholine. Although Puritan’s Pride DMAE itself has not been reviewed by clinical trials, DMAE is the subject of research, mostly in short-term studies that have shown an increase in alertness and vigilance. The chemical has also shown a positive influence on mood especially if combined with vitamins and minerals. DMAE is not able to cross the blood brain barrier, hence its use as a brain enhancer may raise some amount of controversy, unless other chemicals able to help it cross the BBB are present in the supplement.

Several studies demonstrated that DMAE may be therapeutically valuable in the treatment of ADHD (attention deficit hyperactivity disorder). However, the results are not conclusive and additional research is needed to fully support this claim. DMAE is known to be relatively safe, but there may appear some mild side-effects. The recommended daily serving is one capsule, preferably taken with a meal. The product is not recommended for pregnant women or nursing. You should keep in mind that the dose should not be exceeded, as it may cause adverse effects.

There is a small number of testimonials on Puritan’s Pride DMAE, but the majority of them are negative, with just a few reports of small improvements.

Puritan’s Pride DMAE is a supplement designed for improving certain mental abilities, such as concentration, vigilance and alertness. There are numerous supplements similar to this, which is why you should investigate the market before deciding to purchase. Although the main ingredient, DMAE is rather popular for its benefits related to brain, this particular product’s effectiveness has not been proved by any kind of trials. However, the fact that the formula is relatively cheap compared to others may be a significant advantage. You should always consult a healthcare practitioner before the consumption of any dietary supplements.

The main issue with synthetic ingredients is that you don’t always get what you pay for. In reality, synthetic ingredients are well known for their low absorption, poor bioavailability, and the fact that they drain the body’s reserves of other minerals and vitamins (e.g., cofactors) required for proper absorption of other nutrients.
read more
At BrainReference we recognize that dietary supplements can be the source of many allergic responses either due to cross-contamination with high-allergen compounds during the manufacturing process or because they incorporate ingredients obtained from high-risk allergenic foods (milk, eggs, or fish).
read more
Companies with less integrity will use dangerous fillers as a “grease or lube” to aid in easier and faster production. Artificial dyes and colors are used to make supplements more appealing to the eye. Coatings are added to make capsules easier to swallow. How do these fillers impact your body and health?
read more
Independent testing labs are not associated with the producing company, ingredients supplier, the company whose name appears on the product, or with the consumer. This means independent testing labs have no vested interest in the result of the testing and are less likely to “dry lab” or manipulate test results for self-serving reasons.
read more
Product rating (4.33 / 3)

We haven’t used this product too long but my wife is having a lot of Brain health issues and we want to do everything we can for her health. Even if you are not having known problems it is still good to focus on brain health. Good value and quality appearance.

I am so far greatly enjoying this study and concentration aid. It smooths out the sometimes-blurred edges of daily life and provides sharper focus and strengthened stamina when it comes to studying for long lengths of time.

I have experienced for the longest time difficulty in having a clear mind when waking up. Ever since I started taking DMAE, it\’s like someone turned the lights on in my brain, after I take it as soon as I wake up. I recommend it for those who have a fuzzy mind when rising. 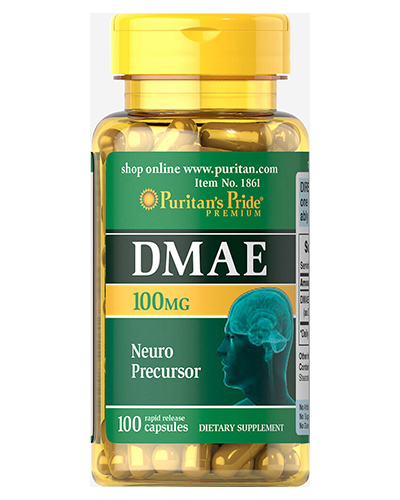