Acetyl-l-Carnitine is a dietary supplement developed in order to support healthy cognition, memory and well-being. The company behind the product is Pure Encapsulations, which was founded in 2007 and is currently established in Massachusetts, United States. Dr. Devin Ryerson is the one that created the company, after having dealt with a serious health condition. His goal is to offer high-quality supplements that show effectiveness.

According to the company’s statement, Acetyl-l-Carnitine is the acetylated form of l-carnitine. The two compounds share similar energy and metabolism promoting properties.

Acetyl-l-Carnitine is recommended for people who want to improve their cognitive function, memory and emotional well-being, or simply maintain their general state of health over time. The core ingredient has been clinically tested in a long-term double blind, placebo-controlled, randomized trial involving 130 elderly individuals for a one-year period where it demonstrated the ability to slow negative cognitive changes caused by aging. The acetyl group from acetyl-l-carnitine is also involved in the production of acetylcholine, an important neurotransmitter of the brain for ideal mental functioning. As we age, the production of this neurotransmitter starts to decline, this being one of the causes of a deficitary memory and decreased emotional well-being. This supplement may be effective, according to its makers.

Used for enhancement of cellular energy and neurotransmitter metabolism, Acetyl-l-Carnitine is based on a combination between acetyl l-carnitine and vitamin C as ascorbyl palmitate. Hypo-allergenic plant fiber has also been added to complete the capsule volume requirement. Acetyl-l-Carnitine can naturallybe found in the body, where it works as an energy generating metabolite. Acetyl-l-Carnitine is involved in the healthy mitochondrial function and cell membrane stability. It may be beneficial in reducing the effects of various diseases. It has several side-effects such as nausea, vomiting, upset stomach and fishy-smelling breath, urine and body odor.

Vitamin C is important in the synthesis of Carnitine. This ingredient is additionally required during growth or pregnancy. However, this supplements is not recommended for pregnant or lactating women. Gastrointestinal upset and skin rash have been reported in sensitive individuals. A multicenter trial of 481 volunteers showed significant memory, behavioral and emotional support with acetyl-l-carnitine supplementation.

3) What Does Acetyl-l-Carnitine Do?

Used for enhancement of cellular energy and neurotransmitter metabolism, Acetyl-l-Carnitine is a product that contains acetyl l-carnitine in combination with vitamin C as ascorbyl palmitate. Also, hypo-allergenic plant fiber has been added to complete capsule volume requirement. Found naturally in the body, acetyl l-carnitine has been shown to support the availability of acetyl-CoA, an energy generating metabolite as well as healthy mitochondrial function and cell membrane stability.

Supplementation may be helpful in decreasing effects of diseases that disrupt the metabolism. However, consumption of acetyl l-carnitine may lead to some side effects such as nausea, vomiting, upset stomach and fishy-smelling breath, urine and body odor.

Vitamin C is essential for the synthesis of carnitine. During growth or pregnancy, the requirement might exceed its natural production; thus supplementation may be required. However, if pregnant or lactating, a person should consider avoiding this supplement. There is few online information regarding the Effectiveness of this alternative medicine, but the majority claim that this product has proved useful.

5) What You Need to Know Before Taking Acetyl-l-Carnitine

Acetyl-l-Carnitine is a moderately priced supplement. It is sold by 60 capsules bottles on the manufacturer website, as well as some other online retailers. When bought in larger quantities, discounts and promotions are offered.

There are several testimonials for consumers on the manufacturer’s website and the majority of them are positive. 500-1,000 mg acetyl-lcarnitine per day is recommended, in divided doses, between meals. It is recommended you should seek for specialised opinion before using any dietary supplement.

Acetyl-l-Carnitine is based on an essential chemical that may be effective in improving certain functions of the brain such as the memory or emotional well-being. In combination with Vitamin C, l-carnitine should be easily absorbed by the body. You should be careful when using this supplement, as it it stated that it may have some additive effects on the body. There is a large number of products similar to this one, so before deciding to purchase you should seek for what it is suitable for you. For best results, this supplement should be combined with a healthy lifestyle and diet.

Are you trying to get your focus back? Look at a supplement formulated not just for brain wellness, but expressly for focus issues.
Featured

But how about our top pick for this year? There are lots of excellent brain supplements out there - right? When it comes down to benefits, it's no wonder that our favored product is HCF® Happy, Calm & Focused. HCF comes with a unique FQ formula of the highest quality and purity ingredients shown to support attention, energy, calmness, mood, and focus. Want a potent supplement specially formulated for brain health and focus - you got it. And, that's just the first step.

Want to try HCF® Happy, Calm & Focused for free? Now is the best time as the company behind the product offers a free sample for a limited time – no strings attached. 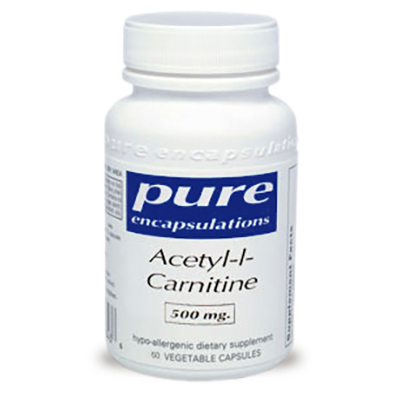 clear
Q:
What does Acetyl-l-Carnitine contain?
A:

Q:
Acetyl-l-Carnitine is all about what?
A:

Acetyl-l-Carnitine is an amino-acid smade by Pure Prescriptions. As the name also suggest, the key ingredient in this formulation is Acetyl-L-carnitine, a mitochondrial metabolite that facilitates the movement of fatty acids into the mitochondria for energy and is also used to generate acetyl coenzyme A. This formula aims to support healthy cognition, memory and emotional well being. Furthermore, Pure Encapsulations Acetyl-l-carnitine is supportive for the cardiovascular system, as well as healthy brain cognition. The recommended dose is 1-2 capsules per day, preferably between meals.

Although there are various metabolism and brain enhancer products, Acetyl-l-Carnitine is based on an essential component that should prove effective in the improvement process. In combination with Vitamin C, l-carnitine should be easily absorbed by the body. There isn't sufficient online information so the significance of this remedy can't be stated. If one or more of the side-effects mentioned above occur, the consumption should be immediately stopped. It is important that the recommended dosage is properly followed and also, people should combine this supplement with a healthy lifestyle for proper results.