Peaceful Moment is an audio track consisting in various sounds that should help people relax or reduce the stress and tiredness of a long day. Piano sounds or sounds that imitate water streams and meditative synthetic pads will ease the way to a deep relaxation and meditation. The 528 Hz Love frequency will penetrate deep inside the listener, bringing him peace and harmony.

These are the claims made by Gaia Meditation, the company behind the development of this audio track. The company also sells other sound tracks for different purposes, including Chakras stimulation, healthy sleeping patterns, or meditation.

The track can be used for the meditation practice or as relaxing background music, but it is stated that it does not contain Brainwave Entrainment. However, the same audio is available with binaural and isochronic tones which are considered brain entraining techniques.

We have to say we’re not really satisfied with the level of details provided on the official site. It looks like there are three versions of this track: the standard containing this meditative pads, piano sounds and water streams imitating sounds, a version based on isochronic sounds (which are considered a brain entraining technique), and a Pack (based on binaural sounds, also used within Brain Entrainment therapies). But we’re not exactly sure, as the information on the official site is a little too vague.

The sound used in this track are piano sounds, water stream imitations or synthetic pads, all believed to induce the calming state the product promises. However, there’s also a version that uses binaural or isochronic tones and these sounds have been shown to help the brain align to the brainwave frequencies specific to the relaxation/ light meditation state.

A detailed description of the product is not provided by its developer. Our online research regarding binaural and isochronic tones has shown that these are popular Brain Entrainment techniques used at this time that showed promising results in guiding brainwaves to easily reach certain frequencies. These frequencies are characteristic to specific states such as relaxation/light meditation, alertness, deep meditation/sleep or very deep meditation/sleep.

2) What Are Peaceful Moment Ingredients?

3) Is Peaceful Moment Right for You?

The effectiveness of sounds in helping with brain relaxation and stress reduction has been studied intensively in the past few years. Certain sounds have been shown to produce calming effects, as stated by those who experienced the benefits of these therapies and scientists alike.

Isochronic sounds are made up of a single tone emitted at identical intervals. They are considered a powerful way to entrain the brain for specific purposes like stress relief, meditation, self-improvement, mind development, or relaxation. Brainwave Entrainment uses sound and light as ways to align the brain’s electro-chemical frequencies to certain brainwaves frequencies that match a desired state (usually certain levels of calmness or relaxation). Brainwaves states are characteristic to different levels of consciousness. For example, the beta state is specific to the awake/alert state, while alpha brainwaves are characteristic to the relaxed and light meditation states. Sound therapies try to influence the brain to fall in step with the external stimulus for therapeutic purposes.

Binaural beats are two tones sounds of slightly different frequencies sent in each ear. The brain has the capacity to combine them, creating the desired result. Binaural beats are effective only when headphones are used. They are considered less effective than isochronic sounds in entraining the brain, but are more effective in creating hemispheric synchronization. This ability is thought to be a very important asset as both logic and creativity are stimulated simultaneously, improving overall cognitive capacity.

Although on the official site the audio is not advertised as a Brainwave entrainment material, the sounds described above are used in some versions and they are classified as brain entrainment methods.

5) Precautions of Peaceful Moment Use

Peaceful Moment can be ordered online from Gaia Meditation’s official web-site. The isochronic version costs $12.47 while the Pack is sold for $20.97. The second version features 2 audio tracks of 45 minutes each. For a full description we advise consumers to access the official site.

Binaural beats were also believed to improve hemispheric synchronization, which promotes genius thinking and higher clarity of thought due to a more balanced use of logic and creativity. The right hemisphere is used during creative thinking, while the left one represents the logical part of the brain. Isochronic tones are characterized by fast pulsing, turning on and off rhythmically. Both therapies are considered more efficient when headphones are used as sound pollution is reduced in the presence of this equipment.

Peaceful Moment appears to be a simple way of relaxation after a stressful day. It does not imply the use of uncomfortable equipment, although headphones are recommended for increased effectiveness. A Peaceful Moments Pack that features all versions is available for the price of $20.97. From our understanding, the standard pack is based on sounds that imitate natural sounds, piano, and other synthetic tones to help achieve the desired state faster and with the least of effort. A version based on binaural and isochronic tones is also available. The price for the isochronic track is moderate ($12.47).

We all understand how difficult maintaining proper cognitive health can be. That's where a supplement with a proven track record comes into play.
Featured

When it comes to emerging quality standards in the supplement industry, HCF® Happy, Calm & Focused is one of the best products we've seen in years. Its unique FQ formula (15+ high-purity, nutraceutical-grade amino acids, and associated neuro-nutrients) offers a lot in supporting focus, attention, mood, and energy.

We're glad to see the company behind HCF® Happy, Calm & Focused is so confident that they're giving new customers a free sample, a good practice we always support. 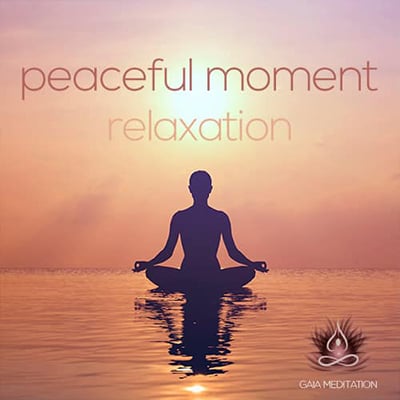 clear
Q:
What does Peaceful Moment contain?
A:

Q:
What is Peaceful Moment?
A:

Peaceful Mind is a 45 minutes audio track designed to help listeners get rid of stress and tiredness by relaxing and meditating. The company behind this product is Gaia Meditation. The track is advertised to potentially induce vivid imagery that will revitalize users. It can be used during a meditation routine or as background music for those who simply search for a simple and effective way to relax. The product comes in different versions including a standard one based on piano sounds, sounds that imitate water stream, or meditative synthetic pads. Other versions feature binaural and isochronic tones which are considered Brainwave Entrainment techniques. The basic version is claimed not to contain any brainwave entrainment. There are not many details provided on the official page about the way this product should work. One important aspect it that is comes with a 60 day money-back guarantee, which is always a good thing.

Peaceful Moment is a sound therapy advertised to help relieve stress and tiredness by helping users achieve deep relaxation and meditation. Sound and light therapies are very popular relaxation methods at this time. However, research in this field is just at the beginning, and the extent of the sound effects (and their potential side-effects) is not fully understood. However, these therapies seem rather inoffensive ways of treatment, as opposed to standard medication. The price for the Peaceful Moment audio is pretty reasonable, so if you are determined to try such a method, Peaceful Moment seems like a good alternative.