Organic Brain Support formula is advertised as a potent antioxidant support that can be beneficial for people of all ages, whether they are young adults, professionals, or elder individuals. The formula is produced by Irwin Naturals, a company that says to be dedicated to formulating targeted supplements based on the highest quality, purity, and safety standards. Their line of supplements consists in weight-loss solutions, specific supplements for men and women, children formulas, and many more.

This particular formula is the only in its category- the organic line. The formula consists in a relatively low number of organically grown botanicals which have been researched for their powerful curative properties in humans. The manufacturer fails to mention whether the ingredients come from their own cultures or are acquired from certified organic farms or sources.

1) What is Organic Brain Support?

The product contains 4 active substances advertised as highly beneficial for overall health. Ginkgo Biloba is one of the most popular natural remedies at this time. The plant extract is considered particularly useful for maintaining proper functions of the circulatory system and brain. Its antioxidant qualities make it a strong remedy against neurodegenerative conditions such as Alzheimer’s disease. The same qualities have made it an even more common remedy against heart conditions and circulatory problems. Today, herbalists and traditional medicine doctors from all over the world recommend Ginkgo Biloba as a solution for people who have suffered heart attacks or have a history of blood-clotting conditions.

Ginkgo is often prescribed alongside Asian Ginseng, another antioxidant extract with multiple benefits on the human health. Asian Ginseng is another ingredient of Organic Brain Support. The numerous scientific studies involving the compound have managed to reveal its positive effects on cognition (learning and thinking skills) and emotional balance. Ginseng extracts are also being investigated as treatments for diabetes, heart disorders, erectile dysfunctions, and various types of cancer.

The other ingredients in Organic Brain Support are also best known for their antioxidant qualities. Blueberries and grape seed extracts are considered great natural sources of these essential chemicals that prevent premature organ aging.

3) Is Organic Brain Support Right for You?

The first ingredient, an extract of the popular Ginkgo Biloba leaf is considered one of the most effective natural brain boosting substances. Ginkgo Biloba leaves have been used for medicinal purposes for a long time, but today the extract is mostly prescribed as a brain formula or as a blood thinning supplement. Research supports its ability to improve blood flow, prevent platelet aggregation, and fight against free radicals.

The second listed active substance is an extract of blueberries, fruits that are highly advertised for their antioxidant effect. Dark-colored berries are generally known to be rich sources of antioxidants that effectively fight against oxidative stress and prevent brain conditions characterized by memory loss.

Asian Ginseng contains a type of substances called ginsenosides which are actually considered responsible for the plant’s benefits in humans. The most common uses of this herb are in the treatment of colds and flues, heart disease, or diabetes. A powerful antioxidant, Asian Ginseng is also often recommended as a brain enhancer with particular benefits on learning and thinking. Combinations of Ginseng and Ginkgo Biloba are believed to bring higher benefits than those of the individual ingredients.

The grape seed extract is another powerful natural antioxidant advertised for its ability to improve mental performance. Other essential benefits of the grape seeds are those on the circulatory system function. Researchers claim grapes and particularly their seeds are beneficial for various circulatory conditions like high blood pressure, atherosclerosis, poor circulation, and can also contribute to the maintenance of healthy cholesterol levels.

Organic Brain Support comes at a moderate monthly price of $22.99. This is the official price listed on the manufacturer’s site. However, various online partners offer the formula for even lower prices (around $15). There is no mention of a money-back guarantee on the official web-site.

The formula also includes a digestive blend designed to increase absorption of the active ingredients. This is an indication that the manufacturer has thought about the formula’s potency and tried to create a product that will bring maximum possible benefits to its users.

8) Our Verdict on Organic Brain Support

Organic Brain Support is in our opinion an original product that has the advantage of being an organic formula. Not many nutritional supplements out there can be classified as fully organic. Moreover, the ingredient list is not very long and it includes generally safe active extracts of herbal origin (natural substances). Still, keep in mind this is not a scientifically proven supplement and there aren’t many testimonials to guide you at this time. Also, some of the ingredients can cause moderate side effect when combined with other drugs or when larger quantities are ingested.

Proper nutrition and daily exercise are part of maintaining brain health and general well-being. But so it's choosing the right product to support calm, attention, and focus.
Featured

When it comes down to high-quality and effectiveness, it's no surprise that HCF® Happy, Calm & Focused is among the best Amino Acids [Blend] we've reviewed in years. There's no doubt HCF can offer more in terms of improving clarity, energy, and focus than any other supplement we've encountered.

If we're picked your interest, the company behind HCF® Happy, Calm & Focused is so sure that you'll get the results you're looking for that it's giving a free sample to BrainReference readers, which is something we're always happy to see. 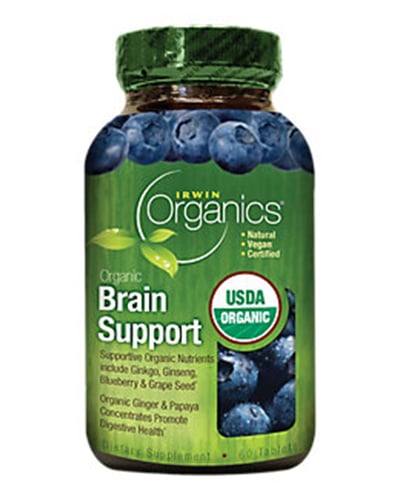 Q:
Organic Brain Support is all about what?
A:

Organic Brain Support is a nutritional supplement advertised as containing only n organically grown ingredients. The formula is claimed to support overall health in adults of all ages. The manufacturing company Irwin Naturals commercializes a large number of nutraceuticals, but this is the only organic product in their portfolio. Organic Brain Support includes 4 herbal based extracts as follows: Ginkgo powder, blueberry powder, Asian Ginseng powder, and grape powder, all organic. A digestive proprietary blend consisting in organic ginger powder and organic papaya powder has also been included to ease absorption and preserve the active ingredients integrity and ensure maximum bio-availability. The formula is sold by the manufacturer itself and numerous online partners. However, the price listed on other retailers' websites is lower than the official one. Users are advised to carefully study the shipping policy of each online store before placing their orders.

Considering that this is advertised as an organic supplement (meaning it lacks GMOs and other chemicals) the formula looks like a superior supplement. The composition also seems to be a good choice as all 4 active ingredients have been the subject of clinical research which also indicates their important health benefits. Still, although numerous scientist and herbalists support the benefit claims issued for these natural remedies, there a lot of research is required before reaching a definitive conclusion. Organic Brain Support has received mixed reviews so far, some consumers complaining about the large size of the tablets which makes them hard to swallow. However, the number of testimonials is limited, so at this time it's hard to say if the formula is as effective as advertised. Please keep in mind that there have been side effects associated with the use of Ginkgo Biloba (increased risk of bleeding, nausea, or stomach upset) and Ginseng (restlessness, high blood pressure, or headache). People already under medication should inform their doctor and make sure the formula is compatible with the products they already use.