Omega-3 Krill Oil is an Omega-3 based dietary supplements. While the manufacturing company Finest Natural does not clearly define the benefit and ailment claims for the formula, it does mention the dietary supplement to also contain super oxidants such as Astaxanthin and Phospholipids.

Finest Natural manufactures a variety of healthcare and dietary supplements, from vitamins and minerals, to Omega-3 and herbal formulations. The company sells its products mainly through the Walgreens retail chain in America and online through different retailers. Further information on company history and manufacturing facilities is, however, limited.

Omega-3 Krill Oil is recommended for adults. The manufacturer recommends a physician is consulted for those who are taking medications, people allergic to fish, diabetic, are pregnant or nursing.

Omega-3 Krill Oil based on Omega-3 fatty acids EPA and DHA, while also featuring powerful antioxidants. The product is advertised to contain no gluten, lactose or trans fat, as well as artificial colorings or preservatives. Additionally, the manufacturer claims the product does not have the odor or fishy taste specific to this type of products, a claim also supported by consumer reviews.

Omega-3 EPA and DHA are essential fatty acids. The body cannot produce them naturally, and instead must be taken from foods such as fish (salmon, tuna, herring, etc.) and certain types of algae. EPA and DHA have blood thinning properties among other benefits, hence helping reduce the risk of heart attacks, stoke or coronary artery disease. Also, DHA research has shown it may have a huge role in proper brain and eye functioning, since it represents the largest part of the fatty acids contained by the brain. This is why there are clinical trials which are studying Omega-3 for such benefits as alleviating symptoms of ADHD and Alzheimer’s disease.

Astaxanthin belongs to a group of chemicals called carotenoids and is in fact a reddish pigment. It is it that gives the red color to salmon, trout, lobster, shrimp and other seafood. Due to its powerful antioxidant properties, it is investigated for potential uses in treating free radical damage conditions such as Alzheimer’s disease, Parkinson’s disease and stroke and even in preventing cancer. The safety of using Astaxanthin supplements and in skin products is unknown.

Krill Oil is considered by many researchers one of the most potent sources of Omega-3 fatty acids. Some studies suggest that supplemental Krill may be up to 48 times more potent than common fish oil supplements. While fish oil is mainly formed from fatty acids, krill oil also provides proper amounts of phospholipids and antioxidants, which further increase potency while bringing additional important benefits.
Phospholipids increase the bioavailability of the Omega-3 fatty acids and help these essential nutrients cross the blood-brain barrier, determining significant brain benefits on both short- and long-term. Astaxanthin is considered one of the most potent antioxidants offered by nature.

Deficiencies in EPA and DHA have often been associated with cardiovascular disease, type 2 diabetes, memory impairment, arthritis, cancers, kidney disease, PMS and weight problems. The antioxidant benefits of these fatty acids must not be ignored, as recent studies revealed excellent abilities in promoting brain health, preventing cognitive decline, mood disorders, mental conditions (autism), or gene mutations. While EPA has been shown to primary benefit the circulatory system by reducing the levels of cholesterol, DHA is considered more important for the nervous system and brain from the very early stages of life (it is essential for healthy development of the fetus’s brain).

The side effects of krill oil include allergies, increased risk of bleeding, loose stools, indigestion, and diarrhea. Certain drug interactions should be of concern including those with anticoagulants or anti-platelet medication, non-steroidal anti-inflammatory medication and other supplements that may increase the risk of bleeding.

Testimonials regarding Omega-3 Krill Oil’s Effectiveness are not available for online consulting. Given that fact that there is still a lot of controversy about the extent of krill oil’s benefits and that the FDA does not support these claims, an accurate evaluation of the formula’s Effectiveness is not possible at the moment.

5) Precautions of Omega-3 Krill Oil Use

6) How Much Does Omega-3 Krill Oil Cost?

Omega-3 Krill Oil comes in bottles of 60 soft gels, advertised as offering a 60-day supply. The monthly price may be classified as moderate. However, this price seems to be slightly higher than similar formulations offered by direct competitors. Several online retailers offer this formula. The main distributor is, however, Walgreens, a reputable and experienced chain of stores that markets a large variety of products. The formula comes with a 100% satisfaction guarantee if the product returns it within 30 days from purchase date. No free trial is offered. Free shipping is also ensured under certain conditions, disclosed on the official site.

Consumers report being satisfied with the formula. The manufacturer recommends taking 1 softgel daily. There are no side effects reported by the manufacturer.

Omega-3 Krill Oil is based on Omega-3 Krill oil extract and also features powerful antioxidants such as Astaxanthin. And although there are no benefit or ailment claims made by the manufacturer, we assume that the Omega-3 will benefit the brain as well as the cardiovascular system, while the antioxidants will prevent free radical damage offering protection to all body cells.Antioxidants are particularly beneficial to brain cells, as they are known to prevent memory impairment and combat oxidative stress harmful effects.

The consumers report being satisfied with the formula and the good quality price/ratio. As with any dietary supplement however, we advise caution and recommend you see a physician and decide whether Omega-3 Krill Oil is the right supplement for you.

Whole-body health and wellness start with the brain. Take a look at your eating habits, sleep patterns, exercise routine, these all play a significant role in your health. It's also helpful to look at brain products that help with focus so you can achieve your health goals.
Featured

HCF® Happy, Calm & Focused is among the best Fatty Acids [Blend] we've reviewed in years, and there's no doubt HCF can offer more in terms of supporting calm and focus than any other product we've encountered.

Not to mention, we love that they give our readers access to a free sample for a limited time. 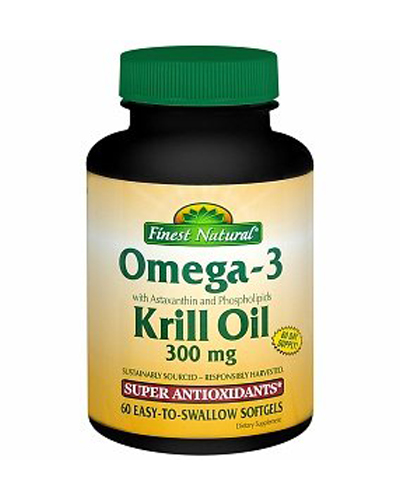 clear
Q:
What are the Omega-3 Krill Oil ingredients?
A:

Q:
What is Omega-3 Krill Oil supplement?
A:

Omega-3 Krill Oil dietary supplement is advertised as a potent support for the maintenance of a healthy heart. The manufacturer of this product is Finest Natural. The formula is designed for adults interested in benefiting from the numerous health boosting advantages of Omega-3 fatty acids. Krill oil is considered a potent source of nutrients, including the powerful antioxidant Astaxanthin. Phospholipids, also present in Krill oil, are fundamental for increased bioavailability of the fatty-acids. EPA has been researched and shown to promote healthy circulatory system, reduced cholesterol levels and inflammation in the bones. DHA is considered fundamental for maintaining a healthy cognitive function, preventing conditions like Alzheimer's disease, Parkinson's disease, depression, autism and memory problems. Omega-3 Krill Oil is marketed as quality tested for purity, however actual evidence to support the core claims lack at the time of this review. The suggested dose is 1 softgel daily.

Omega-3 Krill Oil is a nutritional formula advertised as free of preservatives, artificial color, trans fat, gluten, and lactose. The manufacturer of this product is not disclosed, which is a downside as many branded formulations are also available. Also, this makes it impossible for the consumer to find any information about the origin of the raw materials. The main concern, in this case, is the presence of certain contaminants in the raw materials, even if the product is apparently tested for purity. The formulation does not seem to be the subject of any clinical trial. Krill oil has been, however, extensively researched. Studies revealed beneficial properties in maintaining a healthy heart and brain. These claims are not unanimous, and the occurrence of specific side-effects should not be overlooked when considering such a formulation. As this is not an FDA approved supplement, consumers should be aware that the product is not intended to diagnose, treat, cure or prevent any disease. The best approach is to ask a professional opinion before using such a formula.

This is a great product. My doctor recommended it for my heart and it seems to be effective. My latest blood tests are excellent!