Produced by the US company Nutrakey Inc, Nutrakey Biloba Ginkgo claims to be a powerful dietary supplement specially created to support and enhance the brain. Nutrakey Inc was founded back in 2010 – so it’s a relatively new name on the market – and it produces several quite popular brain supplements.

According to the official website, all Nutrakey supplements are of the highest quality, while the formulas are designed to boost brain power, improve cognitive abilities, support energy levels, improve blood flow to the brain, and enhance memory.

Nutrakey Biloba Ginkgo is a brain supplement based on a very simple formula – it’s sole ingredient is the ginkgo biloba extract.

Used for thousands of years throughout Asia to improve memory and focus, this plant with unique properties has also been found to both increase blood flow and circulation throughout muscle tissue – potentially increasing athletic ability and strength while reducing recovery time and soreness.

Its ability to support both mental and athletic performances, along with thousands of years of safe human consumption, recommend ginkgo biloba to any serious bodybuilder or student. Ginkgo biloba extract also is a very common addition in many nootropics (cognitive enhancers).

Clinical studies showed that ginkgo biloba works by causing vasodilation (expansion) of small blood vessels throughout brain and muscle tissue. The direct results of this is increased blood flow (microcirculation) to the brain, which provides better nutrient and oxygen delivery.

3) Is Ginkgo Biloba Right for You?

As the name suggests, the main ingredient in Nutrakey Biloba Ginkgo is ginkgo biloba.

Clinical studies conducted over the past decade suggest that ginkgo biloba can significantly improve cognitive functions in healthy individuals. According to these studies, the first results are visible immediately after consumption and the herbal extract reach its peak 3 hours after ingestion.

In fact, ginkgo biloba is one of the most popular herbal ingredient in brain supplementation. The plant has been used for centuries by the Traditional Chinese Medicine because of its powerful cognitive properties.

Many scientists believe ginkgo biloba to have nootropic properties; which means the extract can be used to enhance concentration and memory. Nootropics work to promotes brain function such as motivation, intelligence, memory, cognition, attention and concentration.

Ginkgo biloba works by improving blood and oxygen flow to the brain and by increasing the levels of some essential neurochemicals such as neurotransmitters, enzymes, and hormones.

The recommended Nutrakey Biloba Ginkgo dose is one capsule daily with water or any drink on an empty stomach. Take your dose 30 minutes prior to breakfast or prior to lunch.

5) Precautions of Ginkgo Biloba Use

Nutrakey Biloba Ginkgo is a relatively cheap brain supplement. One bottle costs around $15 and it contains 100 capsules, which should be enough for up to 3 months of treatment at the recommended daily dose. This means less than $5 a month for a brain supplement that has received numerous positive reviews and testimonials.

Improving blood flow also enables our body to eliminate toxins associated with mental and physical fatigue, further decreasing the need for recovery and perhaps even sleep.

Nutrakey has taken the safer approach when they developed this brain supplement. The entire formula was build around ginkgo biloba, an herbal ingredient proven to work in many other similar brain enhancers.

Does Nutrakey Biloba Ginkgo work? We can’t find any reasons why it wouldn’t work when taken as recommended. And for just under $5 for a full month of treatment, Nutrakey Biloba Ginkgo may be a very good choice for anyone looking for a decent brain supplement to support and improve memory and the ability to focus.

Not to mention, we love that they give our readers access to a free sample for a limited time. 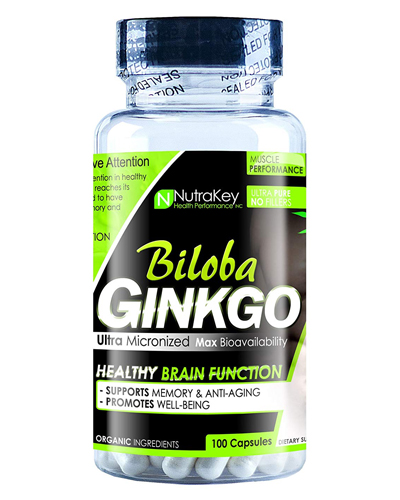 clear
Q:
What are the Ginkgo Biloba ingredients?
A:

Q:
Are Ginkgo Biloba benefits actually a reality?
A:

Nutrakey Biloba Ginkgo has a very basic formula, which isn't really a bad thing. We would have loved to see a mixture of powerful amino-acids to boost the properties of the ginkgo biloba extract, but sadly this isn't the case.