Neuro Vitality+ Review – 8 Things You May Not Know

Neuro Vitality+ is a Nootropic drug advertised to improve mental sharpness, focus, concentration, memory, and mood. The formula features 8 popular ingredients that should act synergistically towards providing the benefits listed above. The product is manufactured by a family owned company named Natura Plus founded by two friends with the desire of providing a targeted range of supplements able to improve the quality of life.

Neuro Vitality+ is a cognitive booster advertised to act on multiple areas of the brain. First of all, the formula can help improve mental clarity by boosting focus, concentration, and memory. Another potential benefit of the supplement is an increase in energy, which will help consumers perform better and for longer periods of time. And lastly, there are the mood enhancing benefits which should not be overlooked because a large part of the nutritional supplements consumers suffer from the negative consequences of having to lead a stressful life.

A 100% money-back guarantee is available for unsatisfied clients. Although the manufacturer doesn’t detail their refund policy, an e-mail address from their customer service is available for those who want to get more information.

1) What is Neuro Vitality+?

The formula features clinically researched compounds, most of them of herbal origin.

Ginkgo Biloba is by far the most popular nutritional supplement recommended for memory problems in the United States and Europe. The plant extract is very popular all around the world where it is utilized on a large scale for various health issues including Alzheimer’s disease, intermittent claudication (a circulatory system problem caused by reduced blood flow), vision problems (glaucoma, macular degeneration), memory problems, and PMS. The benefits of this compound come from its ability to facilitate blood vessels dilatation and reduce stickiness of platelets. This way, the amount of blood flow that circulates through the blood vessels increases and the levels of nutrients and oxygen that reach the organs are higher. An increased oxygen flow in the brain results in better memory and higher cognitive performance.

Looking at the list of ingredients, we can say that Neuro Vitality+ is a pretty common brain supplement that features major brain boosting substances, including herbal extracts, amino-acids, and the brain nutrient Phosphatidylserine.

Four popular herbs are present in the formula: St. John’s Wort, Bacopa Monnieri, Ginkgo Biloba, and Vinpocetine. St. John’s Wort is an extract from Hypericum perforatum used traditionally as an antidepressant. The effectiveness of this compound is comparable to that of some prescription drugs (tricyclic antidepressants) as resulted from clinical trials and scientific researches. There’s still a debate if this remedy is as effective as another type of antidepressants, the SSRIs (selective serotonin re-uptake inhibitors). Another advantage of St John’s Wort as opposed to classical antidepressants is the lack of severe side effects like drowsiness, general numbness, and withdrawal symptoms. However, there are some risks associated with its use such as photosensitivity, allergic reactions, or stomach upset.

Bacopa Monnieri is an Ayurvedic medicine prescribed on a large scale as a treatment for depression and anxiety, and as a memory booster. The herb is believed to enhance the levels of Serotonin and Dopamine, two major neurotransmitters in the brain connected to mood, sleep/awake cycles, and concentration. Dopamine is also required for maintaining proper balance and movement.
Ginkgo Biloba, one of the most recommended nutritional supplements at this time is considered a very effective memory enhancer. It is also commonly prescribed to improve blood flow in the extremities and generally support circulatory system and heart health.

Vinpocetine is a synthetic compound (alkaloid) derived from the periwinkle plant used on a large scale in the nutraceuticals industry. The brain benefits supported by scientific evidence refer to its neuroprotective action against toxins and excess stimulation and its ability to reduce inflammation in the brain. The Cognitive enhancing benefits of Vinpocetine are still a matter of debate as the number of clinical trials involving this compound for this purpose alone is not very high.

5) Precautions of Neuro Vitality+ Use

6) How Much Does Neuro Vitality+ Cost?

Neuro Vitality+ is sold online on Amazon.com (the official online retailer) for a standard price of $49.95. Currently the formula can be purchased for only half the price. One bottle contains 60 capsules, the equivalent of 1 or two months use (the recommended dose is of maximum 2 capsules per day).

Phosphatidylserine is an important brain nutrient also naturally secreted by the human body. It is a phospholipid that acts as a protective layer for brain cells and facilitates neural communication. Low levels of Phosphatidylserine have been associated with poor memory in the elderly particularly as it was observed that these levels decrease with age. Scientists believe that by replenishing this nutrient they can restore memory and prevent neurodegenerative conditions.

Although the formula is based on clinically researched compounds, the effectiveness of this particular blend is not proven. Neuro Vitality+ is however very well received by consumers who claim to have been impressed by the fast action of the formula, and the improvements noticed on the focus capacity, brain fogginess, and memory skills.

However we noticed that some consumers say that the product was offered in return of their “honest review”, a common marketing practice among producers of nutritional supplements. We believe that these particular users’ opinions may not be as objective as those issued by people who actually bought the product. Still we hope they are not trying to deceive other users and that their testimonials are indeed honest, accurately reflecting the benefits and/or the problems experienced.

Are you looking for a product for focus and attention? Try a supplement expressly designed for brain health and focus.
Featured

One of the best Amino Acids [Blend] supplements we've come across in years is HCF® Happy, Calm & Focused. There's no doubt HCF can offer more in terms of improving clarity, energy, and focus than any other supplement we've encountered.

So you can see what HCF® Happy, Calm & Focused offers, the company behind the product is granting all BrainReference readers a free sample now. 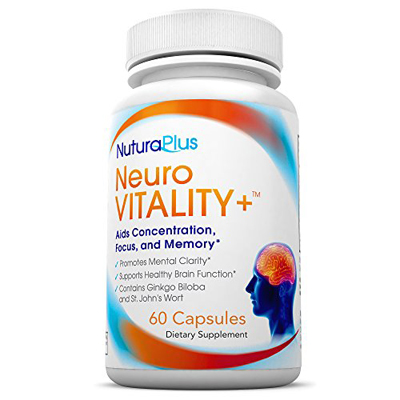 clear
Q:
What are the Neuro Vitality+ ingredients?
A:

Q:
Neuro Vitality+ is all about what?
A:

Neuro Vitality+ is a Nootropic supplement designed to support overall cognitive function by improving several areas of the brain including those responsible for memory, concentration, alertness, and focus. The formula produced by Natura Plus is advertised to promote mental clarity and positive mood through a blend of potent ingredients that include the popular St John's Wort, Bacopa Monnieri, and Ginkgo Biloba extracts.

Phosphatidylserine is also one of the ingredients listed. This is a naturally occurring phospholipid believed to be essential in brain cell communication. Another ingredient, Glutamine is an amino acid used mainly for its energy boosting properties and as well in the treatment of ADHD.DMAE is commonly used to improve mental clarity and alertness. This naturally occurring substance is a precursor of Acetylcholine a chief neurotransmitter responsible for the maintenance of alertness.

Neuro Vitality+ is sold online through the official partner Amazon.com. It is currently on sale and can be purchased for half of its standard price. One bottle ensures the necessary amount for 2 months of regular use at the recommended dosage (1 capsule per day).

Neuro Vitality+ enjoys the consumers' appreciation who rated the product with 4.5 out of 5 stars. However the number of testimonials is pretty low at this time (less than 100). Also, please pay attention to the potential side effects of the formula including photosensitivity, skin irritations, and increased risks of bleeding. People suffering from seizure-like conditions, pregnant and breastfeeding women or patients under MAO inhibiting drugs are also advised to refrain from using the product.