Nerium EHT is advertised as an age-defying supplement primarily designed to help defend the brain against the effects of aging. The company behind the formula is Nerium International, a U.S. based company established in 2011 that prides itself with record breaking sales for anti-aging products. According to them, the success they enjoy is based on their commitment to positively impact as many people as possible, as well as on a strong scientific background for their products.

Nerium EHT is manufactured by Signum Biosciences and is considered to be a groundbreaking anti-aging supplement due to its innovative, proprietary ingredient – the EHT molecule. This is a unique extract from coffee and was discovered by Dr. Jeffry Stock in Princeton University Labs. He explains that the weakening of neuronal connections are primarily responsible for the effects of aging on the brain, causing memory loss, slower reaction times and diminished alertness. According to him, EHT is a natural coffee extract that can help maintain strong neural connections and therefore lead to more robust synapses for an increased brain performance.

Nerium EHT is marketed as a groundbreaking product, although conclusive research on its effectiveness is yet to be published. Available for purchase only in the U.S., the product is fairly expensive by comparison to other anti-aging, brain support alternatives.

A relatively new product, Nerium EHT is a dietary supplement meant to help your brain fight off the effects of aging. It is claimed to improve cognitive function and overall brain health, fortify natural brain functions, enhance the body’s natural energy stores, as well as improve focus, memory and the body’s immune system.

According to Nerium International and the manufacturer, Signum Biosciences, the product’s formula has been extensively researched and has benefitted from conclusive clinical studies. However, it is impossible to tell whether or not Nerium EHT works as advertised, simply because none of this research has been published as of yet.

The key ingredient in this dietary supplement is EHT, “a natural mixture of bioactive molecules isolated from coffee” discovered by Dr. Jeffry Stock after a reported 20 years of research at Princeton. According to him, his research on patients with memory issues revealed that these were primarily due to a malfunctioning of the PP2A protein regulator that led to the weakening of neuronal connections. The EHT extract has allegedly been demonstrated to improve the functioning of PP2A and therefore strengthen neurons and synapses in spite of aging. Nerium International has obtained exclusive rights to EHT, which means that the extract cannot be found in any other product.

The supplement is also fortified with ingredients such as vitamins B6, B12, D3, folic acid, magnesium citrate, selenium, Huperzine A and the antioxidant lipoic acid, which are believed to have a positive effect on memory, focus and overall brain function.

Unfortunately, no testimonials are available on the producer’s website as to the effectiveness of Nerium EHT. In addition, the customer reviews to be found on Amazon are mostly negative, either due to poor effectiveness or to unexpected side effects. Thus, while some buyers appear to be satisfied with Nerium EHT, most complained about nausea or stomach discomfort and had to discontinue its use.

According to the producer and the scientist that discovered it, EHT can have a groundbreaking effect on your overall brain health. Moreover, Nerium EHT is claimed to protect against mental decline, injuries and oxidative stress, while boosting memory and focus through its work on neurons and synapses. Whether or not the product delivers its advertised effects is, however, debatable. Unfortunately, until the actual research behind Nerium EHT is published, its effectiveness will remain more or less uncertain.

On the same note, although it is a relatively new product, most reviews found on Amazon point to its lack of effectiveness and the side effects it causes. Some consumers were even forced to discontinue it altogether due to a reported intense discomfort. When coupled with a very spicy price tag, these downsides and the lack of verifiable research make Nerium EHT a rather risky purchase.

On the other hand, the discovery of EHT has taken place in Princeton University Labs, which are home to some of the most prestigious neuroscience programs in the world. Keeping this in mind, if you can afford Nerium EHT and you don’t suffer any side effects, it might be worth giving it a try yourself.

I have been taking EHT for 6 weeks and I have received astounding results! Piror to taking EHT I was having trouble getting my words out in a complete sentence at times, I was forgetting things like appointments with doctors, where I put things, what I went into a room for, etc… I don’t know if it is a placebo effect or it actually works this well but I no longer have those issues! I can speak without stumbling over words or not be able to say the word that I was thinking. I am focused and organized and I… Read more »

I am looking for possible side effects from this. I am experiencing several things such as freezing hands and core hot flashes, (actually sweating). Very confused! Also feel very hyper-stimulated? Like too many cups of coffee. PVC’s, many more and longer periods of irregularities.

Lisa, I don’t know if anyone has responded to you at this late date, but I would strongly urge you to stop taking this product and speak to your personal physician about your symptoms. Although EHT is a molecule derived from the coffee bean, it is caffeine free. Your symptoms could be coming from an entirely different source and should be investigated. As with any medication or supplement, people will have individual reactions to a substance. Negative side effects can be caused or made worse when taken in combination with other over the counter or prescription medications. Always check with… Read more »

My husband and I both have been on EHT for 16 months went from sleeping 1-2 hours off and on for years to sleeping deep, falling asleep faster,and waking earlier and feeling more alert. I was taking antidepressants for lack of focus etc. I no longer need naps,like I use to, short term and long term memory has improved. My husband has told numerous people about it because it has improved his sleep, focus and energy. I will go without other things before I let this go. I would put 5 stars won’t let me. Know several taking this and… Read more »

My son is 14 years old and was diagnosed with autism around the 5th grade … he’s high functioning but still had problems with social skills , eye contact and just focus in general. My sister is now selling Nerium and had mentioned of some testimonials by mothers with kids of autism. I ordered it and this is week 3 and me, as well as his grandma have really seriously seen changes … we Metin his room is a mess and an hour later he comes out and grabs the vacuum and cleans his whole room! He usually could barley… Read more »

I have been experiencing severe stomach pain since the 45th day.

This product was pushed as having positive outcomes with multiple scleroses. Not only did it not favorably impact my wife, it made me sick the 4 times i tried it. Violent bowel movements and cramps. Customer service in India was no help at all. Nerium people said we needed to take it longer.

I appreciate your review. I am a Nerium Brand Partner (consultant). Testimonials are now available from the Nerium Corporate web site. All Brand Partners can get that information to you.

A 30 day supply can be ordered for as low as $50 plus tax and shipping.

I have been using this supplement since June 1, 2015 and personally see improvement in focus, reduced anxiety and improved immunity. I am a huge skeptic. Also, I have had no side effect. Certainly no stomach upset which I experience prenatal vitamins.

in reply to Linda Abner, I was on the website on April 28, 2016, and as a prospective customer there were no testimonials available for me to review. How ‘goofy’ (polite word) to allow only brand partners to access them!!! 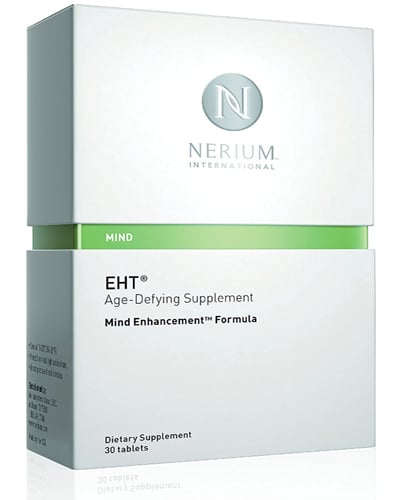 Nerium EHT Readers: learn why HCF Happy, Calm & Focused is currently one of finest supplements of 2020 in the Amino Acids [Blend] ingredient industry.