Nature’s Answer Brainstorm is an alcohol free herbal combination designed to promote mental clarity. The formula is manufactured by one of America’s oldest and most experienced liquid herbal products manufacturer, Nature’s Answer. The company was set up in 1972 and currently operates state of the art manufacturing facilities which comply to cGMP rules and regulations.

Nature’s Answer Brainstorm is designed to be used by adults exclusively, except pregnant and nursing women who are advised against its use. There is no research based evidence presented by the manufacturer to endorse the formulas therapeutic benefits as described in the advertisements.

Nature’s Answer Brainstorm is claimed to be a holistically balanced standardized extract, meaning the formula’s constituents are found in the same synergistic ratios as in the plants from which it has been obtained.

Nature’s Answer Brainstorm is a liquid herbal combination extract including such herbs as Gotu Kola, Ginkgo Biloba, Hawthorn and Periwinkle. The formula is claimed to be Kosher certified.

Gotu Kola, one of the plants with the most extensive Ayurvedic medicine use, is also an important ingredient of many modern herbal medicines developed today. It is prescribed for a large number of uses: wounds, respiratory problems, skin conditions, mental disorders and cognitive impairment.

The plant contains Triterpenoids in large concentrations, compounds which play an important role in nervous signals transmission processes that take place in the brain. One of their most proeminent functions is that of decreasing anxiety and increasing mental performance.

Published scientific research to support its benefits is limited so far, however preliminary evidence indicates that its circulatory stimulant and cerebral tonic properties may help alleviate stress symptoms, improve memory, assist with certain anxiety disorders including social anxiety, panic attacks and obsessive compulsive disorder. Gotu Kola is generally well tolerated by most individuals with minor side effects being reported (fatigue, stomach distress, drowsiness, and nausea). There are certain safety concerns that it might interact with sedatives, cholesterol lowering drugs and other medications.

Similarly, the Periwinkle extract has been linked to numerous potential benefits on the memory, anxiety, nervousness, insomnia, stroke recovery, PMS, inflammation, wound healing, etc. The plant is considered unsafe, and can cause vomiting, nausea, nerve, kidney, and liver damage among others.

Nature’s Answer Brainstorm has received few reviews from consumers. The suggested dose is 1-3 ml (approximately 28-84 drops) 3 times a day in a small amount of water.

Nature’s Answer Brainstorm is an herbal formulation designed to provide mental clarity. The company behind it has specialized in manufacturing herbal liquid formulations such as this and enjoys a good reputation among its customers. While the manufacturer does not detail the benefits of the formulations nor does it make any clear ailment claims, information on the main ingredients (Ginkgo Biloba, Gotu Kola, Hawthorn, Periwinkle, etc) can be found abundantly. Nature’s Answer Brainstorm received a very small number of consumer reviews; hence its effectiveness is difficult to be established at this point. We can however recommend that you carefully read the label before using the formula, and if possible consult a healthcare specialist.

Frankly, I’ve been increasingly turning to herbals to help with my overall wellness program. Now, since I began using BRAINSTORM by Nature’s Answer, it seems like I have significantly better cardiac performance, and fewer cardiac related rythmn disturbances or palpitations.

I’ve only used it for a few weeks, so the advantages are somewhat hard to pin down, but I’m going to continue with it at this point.

The hawthorn in it, alone, may be responsible for the improvement.

My metabolism seems to have improved, and so did my memory. I love taking these in my tea every day, although one bottle only last 10 days or so.

I’ve only just started using but I haven’t noticed any improvements yet. I initially bought these because I’ve had some troubles remembering things lately. I’m waiting a couple of more weeks to see what happens. 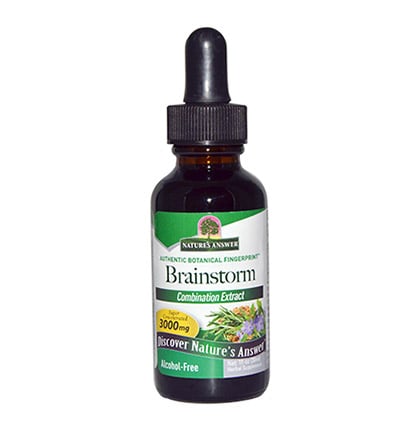