Musashi Acetyl-L-Carnitine is a nutritional supplement advertised as potentially effective in increasing endurance, stamina and energy supply. The company behind the product is Musashi, an Australian manufacturer of sports nutrition products and supplements since 1987. In the beginning, the company developed and sold a small range of Amino Acids but has since expanded its product range to include protein powders, drinks and energy bars. The company claims to develop its products in a joint effort of Musashi qualified and experienced team dietitians, scientists, naturopaths and elite sports people.

According to the manufacturer, Musashi Acetyl-L-Carnitine works to assist the body’s burning of fats as fuel, thus participating in the energy creation process. The product comes in the form of oral powder.

Acetyl-L-Carnitine is designed for people interested in increasing their aerobic performance, improve their power output and enhance their anaerobic capacity.

Musashi Acetyl-L-Carnitine is a single ingredient formula based on the amino-acid with the same name. The supplement is described as potentially helpful for the increase of fatty acid metabolism in muscle and in the production of energy.

Acetyl-L-Carnitine (ALCAR) is a naturally occurring amino-acid believed to be directly involved in the production of energy during burning processes. Acetyl-L-Carnitine is the acetylated form of l-Carnitine, a nutrient essential for mitochondrial energy metabolism. It is produced in the liver and kidneys but can also be taken from certain foods such as fish, poultry, dairy products and red meat.

Clinical research on the amino-acid have also shown its beneficial effects on people suffering from Alzheimer’s disease and mild cognitive impairment, in the sense that it may slow down the rate of cognitive deterioration (verbal critical abilities and memory).

The recommended dosage of Acetyl-L-Carnitine is 250 – 500 mg per day, but may increase significantly depending on the condition it is used for. Even though is considered a safe supplement, consuming more than 3g daily may cause mild side-effects such as vomiting, rashes, diarrhea and a fishy body odor.

As primary energy source, the recommended dose of Musashi Acetyl-L-Carnitine is 1 tea spoon 20 minutes before aerobic exercise, meaning 2000 mg daily. There are no consumer reviews available online, therefore it is hard to assess the formula’s effectiveness in the benefit areas advertised by the manufacturer

Musashi Acetyl L-Carnitine is a nutritional formulation designed to assist with fatty acid metabolism for individuals who need the extra energy support during physical training and exercise.

Secondary benefits of the product include support for the cognitive function as it may help to improve memory function, treat the symptoms of neurodegenerative diseases such as Alzheimer and maintain the health of brain tissue and nerves.

Musashi Acetyl-L-Carnitine is not suitable for pregnant women or children under 15 years. It is advised to ask the healthcare professional or a nutritionist’s advice before consuming this product. There is no evidence of clinical research involving this formula, nor are there consumer reviews to validate the manufacturer’s claims. It is however based on a single active ingredient which has in fact been the subject of numerous trials and was shown as effective in the treatment of brain related issues.

I use this every time i go to the gym, and I feel really energized. 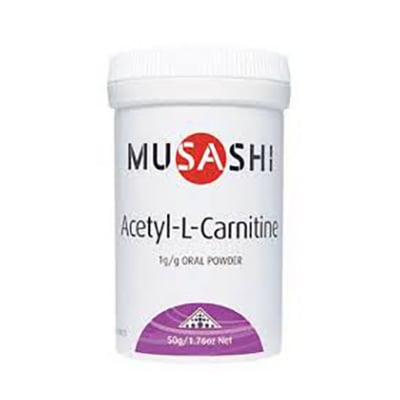