Miracet is a homeopathic remedy designed to reduce the symptoms of smoking cessation and offer nicotine relief. The company behind this supplement does not reveal its name. In the About Us section available on the product’s page they only refer to themselves as “the Company”. We find this to be very strange and we can’t see the reason why they wouldn’t disclose their name.

Moreover, the product’s official page offers limited information about the active ingredients, the research behind the active substances and about the formula itself (if there is any), and the safety indications that come along with using a product that contains some potentially poisonous plant extracts. The page looks more like a marketing campaign than an objective description of a product. The fact that the manufacturer only emphasizes on the benefits of the formula doesn’t increase our trust in the product’s potency. We wonder why these companies try so much to mislead their customers instead of protecting their interests.

The formula is based on 4 active chemicals used in highly diluted forms, according to the homeopathic medicine principles.

The first listed ingredient is Black Spruce scientifically known as Abies Nigra. As a homeopathic remedy, the plant is used to treat numerous ailments including stomach distress, coughing, fever, or insomnia. As an ingredient in products designed to assist in smoking cessation, Black Spruce is believed to manly help to relieve cough, a symptom very common in those who smoke which is also persistent during the first weeks after quitting. Black Spruce may also alleviate symptoms of restlessness, nervousness, and anxiety.

Aconitum Napellus another ingredient in this formula is actually a very dangerous plant, forbidden for human consumption in its purest form. As a homeopathic remedy, the highly diluted extract has been used to improve sleep quality, promote relaxation, and relieve chest pain caused by excessive coughing during the cessation period.

Avena is a popular remedy used in the treatment of opium addiction. Nicotine addiction is however very similar to that of Opium, so the herb is also commonly used to help reduce hysteric episodes and irritability in those who are in the process of quitting. Most smokers experience such problems which often makes them start smoking again. Their need of nicotine and the fact that their bodies are no longer supplied with the substance make them irritable and agitated.

3) Does Miracet Work and it is Safe?

Black Spruce is a popular homeopathic remedy used for a large number of health claims at this time. The extract is believed to be beneficial in treating stomach problems, back ailments, restlessness and insomnia, fever, coughing, or indigestion. In the case of smoking cessation, Black Spruce is used mainly to relieve symptoms of restlessness, anxiety, and coughing. Coughing is a very common thing in smokers, a problem that persists a few weeks after quitting as part of the body’s self-cleaning process.

Aconitum Napellus is another homeopathic ingredient believed to produce a relaxing effect, promote better sleeping patterns, and relieve chest pain caused by coughing. However, if taken in a non-diluted form, the plant has a hallucinogen effect which makes it dangerous.

Avena is a class of oats recognized for its benefits in people who suffer from withdrawal symptoms of opioids. It reduces tension and promotes emotional balance in individuals suffering from hysteric episodes and increased anxiety. Opium addiction resembles nicotine addiction, so many products designed to help with smoking cessation contain this ingredient. Avena has been observed to reduce nervousness in individuals who are in the process of quitting.

Nux Vomica is a poisonous nut which in its purest form is not recommended for human consumption. However, when diluted, the plant becomes a potent healer and in regards to smoking, it particularly helps to reduce food cravings usually experienced by those who have just quit this unhealthy habit. Some smokers declare to have started smoking again because of the large weight-gain that followed after their quitting.

A month supply of Miracet costs $49.95. The formula is sold directly through the official site and is delivered all over the world. Please keep in mind that shipping taxes can be very high for the clients who live outside USA. For example, in a European country, standard shipping (meaning your order will arrive in 10-14 days) is $25, which is half of the formula’s standard cost.
The producer offers discounts for larger orders. A 3-pack for example is $99.95, the deal being that you pay for two bottles and you receive three. A “buy 3, get 3 for free” offer is also available and this seems to be the best value (you end up paying only $25 for a month’s supply).

The last ingredient, Nux Vomica is a poisonous nut in its concentrated form, but when used as a highly diluted solution it becomes a potent support for reducing cravings. People who have quit smoking usually feel the urge to eat more unhealthy foods, which results in rapid weight gain. Nux Vornica is believed to be very effective in supporting normal eating habits in those who have quit smoking.

8) Our Final Take On Miracet

Miracet is advertised as an effective support for those who want to get rid of their nicotine addiction. The active ingredients are common ingredients in products designed to help with smoking cessation. However, there is no safety warning made on the official site, although some of these ingredients are poisonous or can cause hallucinations if taken in high dosages.
Please consult with a specialized healthcare professional before starting to use any unapproved medicine, and especially homeopathic products.

People understand the advantages of a healthy brain, but making lifestyle changes can be difficult. A product for calm and focus can be remarkably beneficial.
Featured

One of the products we like the most is HCF® Happy, Calm & Focused. We love the unique FQ formula (15+ clinically proven, pure & effective associated neuro-nutrients) and its benefits in supporting mood, focus, and attention.

To see what HCF® Happy, Calm & Focused can offer, the company behind the product is offering all BrainReference readers a free sample now. 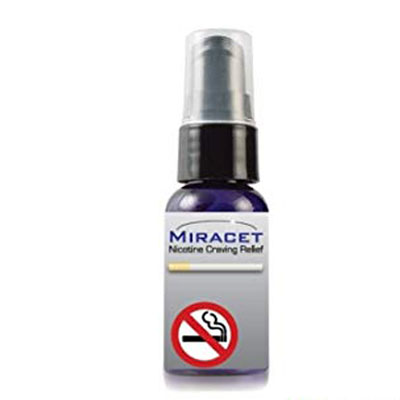 Miracet is a homeopathic formula created for smokers who want to quit their unhealthy habit without experiencing the unpleasant symptoms of nicotine withdrawal that include: shortness of breath, insomnia, cold sweats, irritability and anxiety, nausea, and other aches and pains. The name of the manufacturing company is not mentioned on Miracet's official page. The formula relies on the benefits of 4 herbal extracts in highly diluted form, namely: Abies Nigra (Black Spruce), Aconitum Napellus (Monkshood or Wolfsbane), Avena (Oates), and Nux Vomica (poison Nut). These substances have been used traditionally to reduce anxiety and nervousness, pain, cravings, or insomnia or to alleviate cough caused by long-time smoking. A month's supply comes at a relatively high price, and the refund policy only applies to unopened items. The monthly cost can be reduced by ordering multiple items. A 6 months supply costs $149.95, which leads to a unit price of only $25.

Q:
Are Miracet benefits actually a reality?
A:

Miracet is an herbal formula based on the principles of homeopathic medicine. This means that although it contains some potentially harmful extracts to human health, due to the fact that they are highly diluted they become beneficial. However there is actually no guarantee that the product will work or that users will manage to give up their habit. A 90 day money back guarantee is also available, but be careful because there are some conditions under which the company accepts refunds: no opened items will be accepted, the shipping and handling fees are not covered, and the company charges has a $10 restocking fee for any returns.