MigreLief is advertised as the first comprehensive herbal supplement for the support of cerebrovascular tone – healthy brain-blood vessel function. The manufacturer, Quantum Health was founded in 1981 and currently offers more than 60 scientifically formulated products including personal care products, age management formulas, targeted products (health of the joints and muscles, bones or the immune system) and herbal supplements. The MigreLief formula is patented by Akeso Health Science (from Westlake Village, California) and supplied to Quantum Health.

The formula is recommended as a nutritional supplement for men, women and children over 12 years of age who suffer from chronic migraines. Whereas this is not intended as an instant pain relief, the manufacturer claims MigreLief is able to decrease both the number and intensity of migraines in a time frame of three to six weeks.

MigreLief is a formulation designed to treat chronic migraines while providing support of cerebrovascular tone. The formula contains three core ingredients: Riboflavin, a vitamin, Magnesium, a mineral and Puracol, a plant extract.

Puracol is a specially sourced whole herb feverfew containing a high concentration of parthenolides. The ingredient can be found exclusively in MigreLief and is claimed to the most potent whole leaf feverfew available. Feverfew (or Tanacetum parthenium), traditionally used as a remedy against fever, inflammation and menstrual cramps, is used today primarily as a migraine treatment. The parthenolides particles in its content are thought to slow the release of serotonin from platelets and certain white blood cells. This helps keep the blood vessels properly toned and reduces the frequency, length, and severity of migraines. Research conducted in Great Britain has shown that feverfew is useful in the long-term management of migraines. Side effects are rare and include mouth ulcerations (with non-standardized extracts) and dermatitis. The long-term toxicity of the plant is not known.

Riboflavin or Vitamin B2, is involved in cellular energy generation and is believed to potentially help treat and prevent migraines based on the observation that some persons exhibiting poor cerebrovascular tone also suffer from a deficiency of mitochondrial energy reserves.

The formula contains no yeast, milk, wheat, corn, gluten, soy sodium, salt, sugar, flavorings, preservatives or artificial colors. Side effects are rare and include loose stools and mild gastrointestinal issues. MigreLief is not recommended for pregnant and lactating women and for children under the age of two years. Consumer reviews are generally positive. The manufacturer recommends taking 1 capsule twice a day.

MigreLief is a patented formula designed to assist with the management of chronic migraines. And whereas this is not an instant remedy, it promises to work in three to six weeks. The product is likely to work, since the main three ingredients have been researched and proven effective in migraine prevention and treatment. Also, most consumer testimonials agree on the fact that the formula is effective (regardless the age of the patient) and delivers on the advertised benefit claims.

However, there are some mild side effects associated, especially reported to feverfew consumption. These are not serious, but should be taken into consideration. We recommend a healthcare provider is consulted prior to starting treatment.

The main issue with synthetic ingredients is that you don’t always get what you pay for. In reality, synthetic ingredients are well known for their low absorption, poor bioavailability, and the fact that they drain the body’s reserves of other minerals and vitamins (e.g., cofactors) required for proper absorption of other nutrients.
read more
At BrainReference we recognize that dietary supplements can be the source of many allergic responses either due to cross-contamination with high-allergen compounds during the manufacturing process or because they incorporate ingredients obtained from high-risk allergenic foods (milk, eggs, or fish).
read more
Companies with less integrity will use dangerous fillers as a “grease or lube” to aid in easier and faster production. Artificial dyes and colors are used to make supplements more appealing to the eye. Coatings are added to make capsules easier to swallow. How do these fillers impact your body and health?
read more
Independent testing labs are not associated with the producing company, ingredients supplier, the company whose name appears on the product, or with the consumer. This means independent testing labs have no vested interest in the result of the testing and are less likely to “dry lab” or manipulate test results for self-serving reasons.
read more
Product rating (3.5 / 2)

You have mistated Quantum Health as the manufacturer of MigreLief when in fact, Akeso Health Sciences, LLC is the only patent-holder and manufacturer of MiHow greLief with Puracol™. P.S. Great product for migraines!

I feel some changes, but nothing worth mentioning yet. Still waiting for the four to six weeks effect guarantee.

I am glad that Migrelief is a supplement that has positive effects on me, after just three weeks of use I feel less stress and more focus. It’s great. 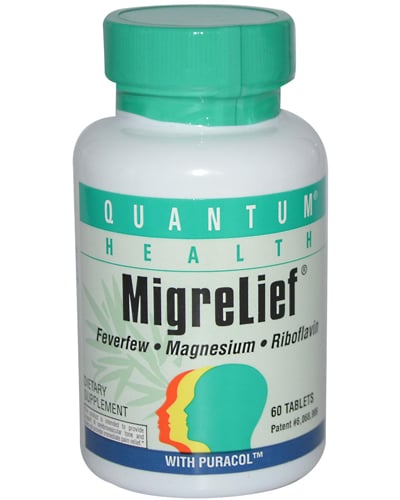 MigreLief or HCF?
Click Here to Find Out Menu wpDiscuz