Mental Advantage is a dietary supplement promoted as a short-term memory, concentration and cognitive function support for the aging brain. According to the manufacturer EuroPharma, the formula works by shielding the brain from free radical damage and uses the antioxidant power of Rosemary to promote neuro-protective properties. The manufacturer also claims that the formula uses a bioavailable form of curcumin, a form that has a 10 times better absorption power than standard curcumin.

EuroPharma is a company headquartered in Wisconsin, USA. Terry Lemerond, the company’s founder and president, has over 40 years of experience in the health food industry and has researched and developed over 400 nutritional and botanical formulations that are top selling products on the market today.

Mental Advantage is designed for middle aged and elderly patients who are susceptible for age impairment in terms of concentration, cognitive function and memory. Pregnant or nursing women should consult a healthcare specialist.

Mental Advantage is a blend of vitamins and herbal extracts designed to assist common problems of the aging brain.

Curcumin belongs to the class of curcuminoids and is found in the Turmeric Root extract. Although research on humans is still in its early stages, in vitro and animal studies have suggested a wide range of therapeutic and preventive effects of curcumin. Turmeric has been used by traditional Ayurvedic medicine practitioners for thousands of years, and modern research has shown curcumin to be linked to most of its medicinal benefits. Curcumin has shown antioxidant, antitumor, anti-arthritic, anti-ischemic and anti-inflammatory properties (in animal tests). Its impact and effects on osteoarthritis, rheumatoid arthritis, colitis, heart failure, stomach ulcers, high cholesterol, viral infections and Alzheimer’s disease are currently under research. Side effects may include rashes, hives and diarrhea.

Vitamin D3, one of the most important vitamins for the body, can be obtained from food or from exposure to sunlight (80-90% of what the body gets). Although traditionally believed that it main role is in fixating calcium and phosphorus and helping the bone system grow and maintaining its density, there is evidence for the presence of the vitamin D receptor in brain, meaning that this vitamin may have some function in this organ. So far, scientists have shown that vitamin D activates and deactivates certain enzymes in the brain and the cerebrospinal fluid which are involved in neurotransmitter synthesis and nerve growth.

3) Is Mental Advantage Right for You?

Vitamin D3 is one of the most important vitamins needed by your body. Apart from its role in fixating calcium and helping the bone system grow and maintaining its density, vitamin D3 also helps boost the immune system. As an added plus, research suggests that vitamin D3 also might help when dealing with Alzheimer’s disease. However, more research is needed to prove more than just a correlation between Alzheimer’s and vitamin D3 deficiency. Decreased levels of vitamin D3 in the body might lead to serious illnesses such as diabetes, MS (multiple sclerosis) and even rheumatoid arthritis.

Clinical data gathered from different tests made on Spanish Sage show that this herb contains a variety of phytochemicals acting as acetylcholinesterase inhibitors. Acetylcholinesterase is one of the reasons the human brain might not be able at a certain age to perform at its fullest. This compound builds up in the synapses and causes the mind to become less efficient because it hinders neurotransmitters to stimulate neurons adequately. A study made in the UK by neuroscientists demonstrated the positive effect Spanish sage has on memory and cognition even on healthy young adults thus proving that this herb might be useful in older individuals as well or even on the early symptoms of Alzheimer’s disease.

Rosemary is a plant known for its enhancing cognitive properties for centuries. A study in which rosemary was pumped into the air conditioning at an office showed an increased power of concentration and greater retention levels in people working there. Rosemary also acts as a powerful antioxidant, helping the body ridden itself from malicious free radicals that negatively affect the human body and mind.

Preliminary studies made on Curcumin’s effect on the human body suggest that it might be useful in preventing and treating several diseases, however, clinical trials have failed to demonstrate that this herb has an effect. Studies carried on laboratory animals show that curcumin helps against Alzheimer’s disease and that it also acts as an antioxidant. However, these results have not yet been confirmed in humans, and curcumin is still undergoing studies and experiments that work to prove its incommensurable abilities.

4) What Mental Advantage Does?

6) How Much Does Mental Advantage Cost?

Mental Advantages is a rather pricey supplement. This product is available in bottles containing 60 soft gel capsules and can last up to 3 months depending on the daily dosage. Mental Advantages can be purchased from the manufacturer’s website or from various other online retailers.

7) How to Take Mental Advantage

The formula has no side effects mentioned. Also, we could not identify product reviews to see if consumers reported any side effects either. The recommended daily dosage is 2 soft-gels.

8) Our Verdict on Mental Advantage

Mental Advantage is a combination of Vitamin D3 and herbal ingredients possessing strong neuro-protective properties. The formula is designed to assist with issues faced by an aging brain, particularly those affecting memory, concentration and cognitive function.

While no evidence is brought by the manufacturer to support the benefit claims, nor are there any consumer testimonials available online to help validate Mental Advantage’s effectiveness, the formula is likely to work for some consumers since the ingredients have been scientifically proven to benefit certain areas of the brain.

Given that not all patients react in the same way to the same medicine, we advise our readers to consult a healthcare provider before use.

While Mental Advantage may prove helpful, you should also consider a supplement to help you focus and improve attention.
Featured

Our favorite attention and focus supplement this year is HCF® Happy, Calm & Focused. This product excels at nourishing your brain. Uniquely formulated and using only clinically proven ingredients, HCF works to make your journey towards brain health one you can stick with for the long term.

For a limited time, BrainReference visitors can give HCF® Happy, Calm & Focused a try as part of a free sample offer. 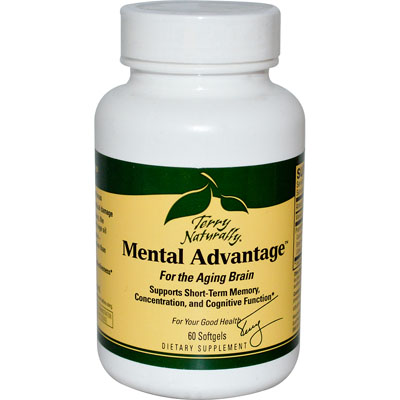 clear
Q:
What does Mental Advantage contain?
A:

Q:
What is Mental Advantage?
A:

Mental Advantage is presented as a blend of vitamins and herb extracts aiming to improve cognitive and brain functions. Mental Advantage is brought to you by EuroPharma. The mix of active ingredients had proven results before in mental healthcare. Some very popular ingredients in this domain are Rosemary and Spanish Sage, which are known for their usage in helping patients with Alzheimer's and even cancer. This product contains no sugar, artificial colors or preservatives, reffer to your healthcare practitioner before usage.

The manufacturing company claims that Mental Advantages helps protect the brain against free radicals and taken in to consideration the fact that its ingredients are also powerful antioxidants, this statement might be valid. However, the formulation also plays an important role in the Effectiveness of the product and although many consumers using similar supplements based on the same ingredients might seem satisfied with the results that do not guarantee that this product is as effective. Due to its ingredients, Mental Advantages seems like a healthy alternative in comparison with other more powerful drugs.

I tried Mental Advantage and it proved to be a very good memory enhancer, everyone that has memory issues should use it