The manufacturer, Spring Valley, is a U.S. based company which manufactures a wide variety of prenatal vitamins, supplements, herbal formulations and vitamins. Not much information is available on the company history or facilities; however their products seem to enjoy popularity and to be generally perceived as good quality products.

The formula includes a standardized extract of Ginkgo Biloba, one which has been clinically tested for safety and effectiveness. Memory Support Ginkgo Biloba is recommended to people who desire to maintain the peripheral circulation and oxygenation to the arms and legs, to improve their mental performance and generally anybody who wants to benefit from Ginkgo Biloba properties.

Ginkgo has been the topic of extensive research regarding potential brain enhancement properties. It has been shown to improve peripheral circulation, including brain blood circulation, hence it increases oxygen and nutrient supply to the central nervous system. Another mechanism of action is through protecting brain cells from free radicals damage which can cause oxidative stress.
Although rare, side effects such as stomach upset, nausea, dizziness, diarrhea or headache have been reported. Also, Ginkgo may decrease the ability of the blood to clot and to interfere with diabetes and seizures.

3) What Does Memory Support Ginkgo Biloba Do?

Memory Support Ginkgo Biloba utilizes as a single ingredient Ginkgo Biloba extract to promote an enhanced concentration and memory. Contained Ginkgo Biloba has been standardized at 6% Terpene Lactones, and 24% Flavonol glycosides, a level of concentration scientifically proved as effective and safe. The only ingredient contains two active compounds that are thought to possess anti-oxidant properties as well as blood flow improvement qualities.

Modern science has extensively researched Ginkgo Biloba due to its potential brain enhancement qualities. Evidence has shown that this ingredient may help improve peripheral circulation as well as brain blood flow, because it increases nutrients and oxygen supply towards the brain. A secondary mechanism of action refers to cell protection from damage done by free radicals, those being one of the main causes of oxidative stress. Even though not common, side effects like the following: dizziness, headaches, diarrhea, and nausea have been reported by people following a Ginkgo Biloba treatment. Also, this component may decrease the blood’s ability to clot, thus interfering with seizures and diabetes treatment.

There are online customer testimonials about Memory Support Ginkgo Biloba. What is being reported includes the following:

6) How Much Does Memory Support Ginkgo Biloba Cost?

Memory Support Ginkgo Biloba is usually available in the form of bottles that contain 240 capsules. Its price is considered affordable, especially due to its proved Effectiveness. When purchased in larger amounts, retailers offer promotions and discounts so that people can follow the treatment properly while becoming faithful customers.

There are very few reviews available online, with consumers reporting mixed results of the formula. No dosage recommendations are made.

Memory Support Ginkgo Biloba is based on a Ginkgo Biloba standardized extract. It is a very popular herbal ingredient and one of the best selling dietary supplements in the U.S. The formula offered by Spring Valley has little differentiation from similar single Ginkgo Biloba extract. The formula is likely to accomplish its purpose since the benefit claims are researched and scientifically proven Ginkgo benefits.

However, you should be aware that Ginkgo contains coffee and there may be side effects and drug interactions which derive from here. Also, mild side effects are associated to Ginkgo Biloba. As always, we you seek the opinion of a healthcare provider prior to deciding to start using the product.

Do you want to regain focus and improve overall wellness? Consider a program designed specifically to help you with not just brain health, but focus and clarity specifically.
Featured 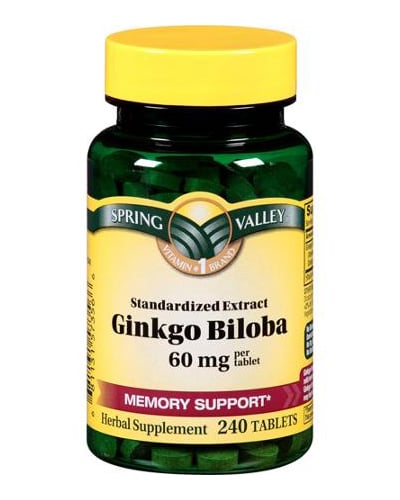 clear
Q:
What are the active ingrediens in Memory Support Ginkgo Biloba?
A:

Q:
Memory Support Ginkgo Biloba is all about what?
A:

As a Ginkgo Biloba based remedy, Memory Support Ginkgo Biloba is one of the best selling supplements in the U.S. The formula that has been offered by Spring Valley doesn't bring anything new in comparison with similar remedies. Therefore, based on client testimonials and research related to this particular extract, the supplement is like to achieve its purpose. However, Ginkgo Biloba contains coffee, and there may be some unwanted side-effects and drug interactions that can appear from following this treatment. As always, because Memory Support Ginkgo Biloba represents a supplement, it should be treated likewise and combined with a fit lifestyle.

It impacted my memory, but not considerably.

Some dietary supplements work better/faster than others. Usually, we recommend giving a new formula at least 30 days to show the first positive results. Furthermore, each individual is different. While the manufacturer may claim that a supplement will offer immediate results, from our experience, in most cases, that doesn’t work. So please allow at least one month for Memory Support Ginkgo Biloba to work.

The fact that this formula is based on Ginkgo Biloba convinced me to try it.