Maxi Omega-3 Memory Formula is a dietary supplement based on fish oil derived Omega 3 and Ginkgo Biloba advertised to support memory, enhance blood circulation to the brain, maintain healthy brain function and increase alertness and concentration.The manufacturer of the formula is a company called Maxi Health Research, a company that claims to be one of the largest suppliers of vitamins, minerals and herbs with kosher and vegetarian special product lines in the U.S.

Since its foundation in 1974, the company has developed a large number of dietary supplements, vitamins, stress and sleep formulas, diet products and specific health conditions product. It currently sells more than 130 nutritional supplements in tablet, powder, chewable, capsule and liquid forms designed to meet the health needs of the entire family. The company is headquartered in New York.

Maxi Omega-3 Memory Formula is a mixture of Omega-3 fatty acids, vitamins, herbal extracts and other nutrients designed to support memory, increase alertness and concentration and blood flow to the brain.

The Ginkgo Biloba standardized extract used to create Maxi Omega-3 Memory Formula (for 24% ginkgoflavonglycosides and 6% total terpene lactones) has been clinically tested for purity and effectiveness, unlike other Ginkgo extracts. Ginkgo Biloba is most frequently used to improve cognitive performance in healthy people (memory, focus and alertness) as well as to slow age related cognitive decline conditions (such as dementia). It possesses strong blood flow enhancing properties (improving peripheral circulation) and antioxidant properties. Mild side effects are associated to Ginkgo, such as headache, stomach upset, constipation, dizziness, forceful heartbeat.

3) What Does Maxi Omega-3 Memory Formula Do?

Maxi Health Kosher is claimed to improve memory and blood circulation to the brain. Fish Oil is one of the ingredients found in Memory Formula. The essential fatty acids in fish oil, EPA, and DHA act as brain fuel and prevent inflammation. The neuron of the brain cell is composed of about 30% DHA which helps memory, and EPA has been shown in studies to cause improvements in Alzheimer’s patients.

Maxi Omega-3 Memory Formula also includes vitamin B12. The New England Journal of Medicine reported an association between memory loss and B12 deficiency. Similarly, the Annals of Internal Medicine reported memory improvement with B12 supplementation.

Acetyl L-Carnitine is an amino acid responsible for healthy neuron and brain function. The age-associated cognitive decline was reversed with Acetyl L-Carnitine according to a study done by the National Academy of Sciences. This and many other studies emphasize the ability of Acetyl L-Carnitine to help brain cells, proving the base for better memory and learning.

Ginkgo Biloba is one of the most popular herbs found in brain supplements at the moment and currently supplements containing Ginkgo Biloba extracts are best sellers in Europe. This herb is well known for its memory enhancing activity, achieved by increasing circulation and some antioxidants in the brain.

Maxi Health Kosher is a somewhat pricey supplement, sold in bottles containing 90 maxi cabs, designed to last three months if the daily recommended dosage is not exceeded. The product can be found for purchase on the manufacturer’s website.

There are no consumer reviews regarding the particular combination of ingredients in Maxi Omega-3 Memory Formula. Also, there are no side effects reported by the manufacturer. The manufacturer recommends taking 1 to 2 capsules daily.

Maxi Omega-3 Memory Formula features Omega-3 fatty acids EPA and DHA and a standardized Ginkgo Biloba extract to ensure support for memory, concentration and alertness and optimum blood flow to the brain. Additionally, the fish oil is rigorously tested for potency and purity and contains no contaminants such as mercury, lead, cadmium, PCBs, pesticides and dioxins. The formula is likely to work since the main ingredients have been associated to cognitive function improvement and neuroprotective properties. However, there are no consumer testimonials to back up the benefit claims.

Also, there are some safety and drug interactions concerns for some of the ingredients, hence we strongly recommend a healthcare provider is consulted before use.

If you’re ready to improve your brain health and wellness, we believe science has the answer.
Featured

Among the best natural supplements for clarity, attention, mood, and focus we've seen this year is HCF® Happy, Calm & Focused. We love that HCF uses only high-quality nutraceutical-grade amino acids and associated neuro-nutrients to ensure purity and standardized for maximum effectiveness. Plenty of customers are already talking about the wonderful results they're getting.

Furthermore, we love that they give our readers access to a free sample for a limited time. 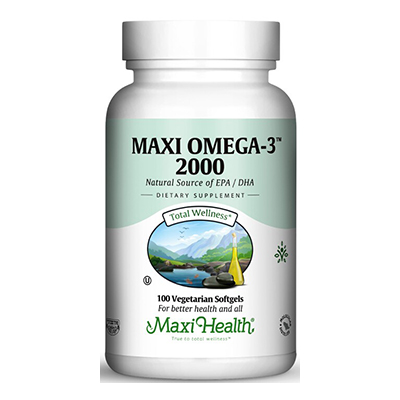 clear
Q:
What does Maxi Omega-3 Memory Formula contain?
A:

Q:
What is Maxi Omega-3 Memory Formula supplement?
A:

Maxi Omega-3 Memory Formula is advertised to be a product that aims to support brain health. The manufacturer of this product is called Maxi Health and is located in New York, United States. Maxi Omega-3 Memory formula is a dietary supplement that is formulated using several ingredients, one of which is Ginkgo Biloba, an ancient herb used in the Ayrvedic tradition that prevents learning and memory disorders. Another important ingredient is Fish Oil, a very good source of DHA and EPA, two essential fatty acids that prevent short term memory loss as well as long term memory loss.

Although, taken separately, the ingredients in Maxi Health Kosher Maxi Omega-3 Fish Oil Memory Formula EPA/DHA have been proven effective in memory enhancement, it does not prove the blend formula is as effective. There is not enough information made available about the Effectiveness of Maxi Health Kosher Omega-3 Fish Oil Memory Formula EPA/DHA. However, like any other brain supplement containing these ingredients, various factors determine its efficacy.

I have been looking for some time for a memory supplement, I’m glad that this was my choice, no memory loss at all.