Liquid Chlorophyll is a nutritional supplement offered as a support for the natural blood-cleansing process, for the cleaning of the body and maintenance of several important systems such as the circulatory, intestinal, and female reproductive system.

Nature’s Sunshine, the manufacturer, is an American based company founded in the 1970’s as a family business. At first, the company sold encapsulated cayenne for the ailment of stomach problems. Today it has extended its activity in over 30 countries and is present in approximately 600,000 retailers.

This formula is based on Chlorophyll, the green pigment from plants which is the correspondent of blood for humans. This molecule is chemically similar to human blood, but instead of having iron as the central atom, it has magnesium.

Liquid Chlorophyll is claimed to be efficient in eliminating toxins form the body and neutralizing natural body odors, acting as an internal deodorant and improving the immune system. The formula is an alpha-extract stabilized by replacing the central atom (magnesium) with sodium and copper. Copper is needed for the proper functioning of human cells and Copper deficiencies result from the body’s inability to use iron and protein. This causes emotional and mental instability, impaired respiration, low energy and skin sores.

Liquid Chlorophyll is an herbal based dietary supplement. The main active ingredient is chlorophyll, the green pigment found in plants. Through photosynthesis, it allows the plant to absorb the necessary energy to feed and grow.

This substance is used as a food additive, as a colorant for different foods and beverages. In alternative medicine it is used as a body odor remover, in the treatment of constipation and to increase oxygen levels in the blood. However, there is no reliable evidence of any clinical research which supports any of these claims. Moreover, it has been shown that the substance is unable to enter the blood and its structure is not similar to hemoglobin as stated, but to a component of the red cells called haemin.

It may be potentially effective in reducing the symptoms and pain associated with chronic pancreatitis. Chlorophyll is considered potentially safe if taken orally. It may cause extra-sensitivity of the skin when exposed to solar light. The intravenous administration of chlorophyll based formulas is not recommended without the help of a trained medical professional. There is not enough information about the use of this substance during breastfeeding or pregnancy.

The recommended usage for Liquid Chlorophyll is 1 teaspoon (5ml) dissolved in a glass of water twice daily.

Liquid Chlorophyll is a formula designed to support in a natural way the circulatory and immune system as well as to strengthen cells, detoxify and deodorize the body. The main active ingredient is represented by the base cellular form of plants, which has been compared to red blood cells in humans. Scientific studies revealed insufficient evidence of the effectiveness of chlorophyll based products in treating most of the conditions. The compound needs further research in order to establish its benefits. Liquid Chlorophyll has however received very good reviews regarding its effectiveness in reducing body odor and boosting the immune system. A healthcare provider’s opinion should be sought before taking any dietary supplement.

I like it because it has a good taste; it is cheap and has shown to be an effective way to reduce the nasty odor caused by hard training at the gym.

My whole family uses Liquid Chlorophyll to boost their immune system especially in the cold season when the probability of getting a cold or flu is rather higher. I am completely satisfied of how it has worked for us so far. 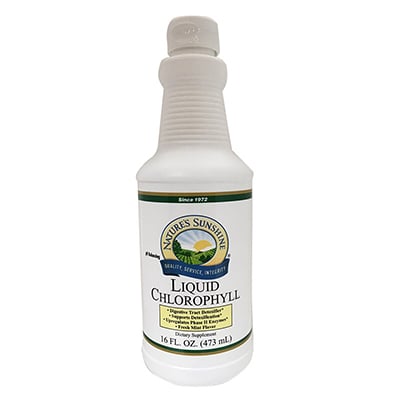