Kyolic Neuro Logic is marketed as a natural dietary supplement formulated to improve memory and enhance mental acuity. The formula is manufactured by the Japanese company Wakunaga Nutritional Supplements.

The company established in 1955 currently manufactures and globally distributes dietary supplements and alternative medicine formulas which are thoroughly tested for safety and effectiveness. All company products are based on an aged odorless garlic extract and are sold under the Kyolic brand. The company also operates a subsidiary in the United States.

The manufacturer claims that Kyolic Neuro Logic was developed by Dr. David Perlmutter, M.D., a board certified neurologist. The formula which features many brain performance enhancers such as Choline, Ginkgo Biloba or Phosphatidylserine is designed for adult use only.

Kyolic Neuro Logic is a mixture of vitamins, herbal ingredients and other nutrients designed to support memory and mental acuity.

The formula features a garlic extract, particularly one called Aged Garlic Extract. According to the manufacturer, the extract has been developed based on the traditional usage of garlic, and, unlike many other garlic extracts available, this one is aged naturally for 20 months (instead of using heat). The unique natural aging process adds greatly to the value of garlic, as the harsh and irritating compounds are significantly reduced and so is the pungent odor.

Garlic contains the compound allicin, which is responsible for the specific odor, but also for most of its benefits. The main benefits of garlic extract are reducing cholesterol, lowering blood pressure, improving the immune function and offering liver protection.

Gingko Biloba Extract is commonly used to improve memory and sustain brain function. It has been extensively researched and scientists concluded that its benefits mainly refer to enhancing circulation (including peripheral and to the brain) and to fighting free radical damage (antioxidant properties). These two properties account for Ginkgo being used to treat conditions such as Vertigo and Tinnitus or to prevent heart and blood vessels deterioration or age related memory impairment. Side effects are rare but include nausea, dizziness or headache. While it is considered generally safe, Ginkgo may thin blood and interfere with blood thinning medication or cause harm to people who suffer from a blood clotting disorder.

3) Is Kyolic Neuro Logic Right for You?

The main ingredient on which this formula is based is Garlic, which is a herb that has been used over the years as medicine to treat or prevent an extensive range of conditions. It is said that this herb can help with many problems regarding heart health and the circulatory system; conditions like high blood pressure, high cholesterol, coronary heart disease, or heart attack can all be treated in some measure with garlic. Other uses include the prevention of colon cancer, rectal cancer, stomach cancer or breast cancer.

Another ingredient that is crucial for brain health and is found in this product is called Lecithin. This substance is a fat that is an essential part of every cell in the body. The primary usage for Lecithin is treating memory disorders like Alzheimer’s disease, learning and memory disorders, short and long term memory loss; it also shows promise in treating gallbladder disease, liver disease, and certain types of depression.

There are online testimonials about this supplement. What is being said includes the following:

6) How Much Does Kyolic Neuro Logic Cost?

This formula is available on the market at an affordable price, but with no free trials or money back guarantees related to it. The form in which this product can be purchased is a 120 capsule container that assures a month’s supply of Kyolic Neuro-Logic. The serving size is two capsules, and the suggested use is two times per day with a meal and a glass of water, or as indicated by a medical doctor. The manufacturer does not directly sell this product online, but it can be purchased from some online retailers that may also offer other supplements that have the same desired effects.

No product reviews could be identified online. Kyolic Neuro Logic does not contain sodium, yeast, dairy, preservatives, sugar, gluten, artificial colors or flavors. No side effects are mentioned either. The manufacturer recommends taking two capsules with a meal twice a day.

Kyolic Neuro Logic features one of the most researched forms of garlic extract available on the market in a formula designed to promote memory and healthy brain function. However, it is not the garlic extract that benefits the brain, but rather ingredients such as B Vitamins Folic Acid and B 12, Ginkgo Biloba and Choline. Each of them works differently on the brain. Some fulfill the brain’s need for nutrients and Oxygen (Ginkgo Biloba), while some stimulate neurotransmitter synthesis which in turn enhances different brain functions.

The formula is similar to many products on the market but is unique through the content of garlic extract which helps protect the immune function and circulatory system. There are no consumer reviews regarding the formula, hence it is very difficult to assess its effectiveness. Still, as with any dietary supplement, we recommend caution and, if possible, to consult a specialist instead of self administrating. 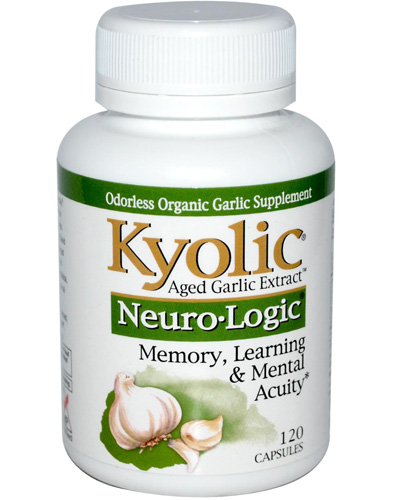 clear
Q:
What are the active ingrediens in Kyolic Neuro Logic?
A:

The product discussed in this article seems to be a good choice when aiming to use a supplement that sustains brain health and prevents short and long term memory problems or attention deficits and disorders. The ingredients used in this blend are said to be natural, plus they all have a long and traditional used and also address brain health in many ways, thus sustaining the manufacturer's claims regarding potency and effect. The affordable price of a one month supply can be a key factor in deciding which dietary supplement that addresses brain health is the best choice as to satisfy individual needs and preferences.