Kumato Labs Cho-Wa is a type of green tea green tea which is advertised as an incredible traditional Japanese remedy. The tea manufactured by Kumato Labs is claimed to have been a highly exclusive remedy dedicated to the members of the Tiger Shogun family and later its descendants.

Kumato Labs is a company founded by Dr. Kumato, the person who apparently discovered the tea and received it from an old Japanese sensei and healer. Kumato Labs manufacture and distribute three traditional Chinese medicine products, including Cho-Wa. The product is dedicated to any adult seeking support for overall health or for particular functions or health conditions.

Kumato Labs Cho-Wa is a combination of herbal herbs, resulting in a green tea blend. The tea contains herbs which are widely used in Western Medicine, including Rhodiola Rosea, Ginkgo Biloba, Green Tea, Ginger, and Licorice.

Rhodiola Rosea is a plant originally grown in Russia, Siberia, and other Scandinavian countries. It is here where its original uses as an adaptogen and general tonic gained popularity. Scientific research, although so far with inconclusive results, shows that Rhodiola is extremely efficient in correcting mental and physical stress and in promoting an overall healthy stress response. Recent evidence shows that Rhodiola may benefit symptoms of depression, insomnia, chronic fatigue syndrome, various anxiety disorders such as social phobia and social anxiety and emotional imbalances. Due to the fact that Rhodiola might interfere with blood pressure medication, caution is advised.

Ginkgo Biloba has been touted for a large number of benefits: some scientifically proven, while others mere suppositions. These include prevention of memory loss, claudication, macular degeneration, tinnitus, PMS, and others. Green Tea is a powerful antioxidant and is widely used as a way to prevent illness, being consumed on a daily basis.

The recommended daily dosage for this formula is one packet infused in hot water. Consumers generally agree that this is an effective product and claim it is able to enhance boost, memory, and mental alertness.

Herbal medicinal remedies are generally cheaper and have fewer side effects than traditional medicines. This is why many prefer them to prescription or other drugs. The supplement is advertised as a tea with a wide spectrum of healing benefits, both as a way of preventing and as treating numerous health conditions. The Cho-Wa tea is claimed to have been the exclusive remedy of traditional Japanese Shoguns until it was made available to the public. Although Cho-Wa testimonials and consumer reports claim the product assists with a large number of health problems, there are no published scientific studies or clinical trials to confirm the benefits of this plant. The product contains coffee; therefore, extra caution is advised for caffeine-sensitive individuals.

The main issue with synthetic ingredients is that you don’t always get what you pay for. In reality, synthetic ingredients are well known for their low absorption, poor bioavailability, and the fact that they drain the body’s reserves of other minerals and vitamins (e.g., cofactors) required for proper absorption of other nutrients.
read more
At BrainReference we recognize that dietary supplements can be the source of many allergic responses either due to cross-contamination with high-allergen compounds during the manufacturing process or because they incorporate ingredients obtained from high-risk allergenic foods (milk, eggs, or fish).
read more
Companies with less integrity will use dangerous fillers as a “grease or lube” to aid in easier and faster production. Artificial dyes and colors are used to make supplements more appealing to the eye. Coatings are added to make capsules easier to swallow. How do these fillers impact your body and health?
read more
Independent testing labs are not associated with the producing company, ingredients supplier, the company whose name appears on the product, or with the consumer. This means independent testing labs have no vested interest in the result of the testing and are less likely to “dry lab” or manipulate test results for self-serving reasons.
read more
Product rating (3.67 / 3)

For the past 15 years I have had one cup of Cho Wa every morning. During this time I have not experienced any illness, other than may be a one day sniffles, my energy level in all areas stays elevated and my mind remains sharp. I am 68-1/2 years young and enjoy the company of many young women. All of which I can directly contribute to religiously taking Cho Wa. GREAT productI If you have serious health issues you will probably need 60-90 days of Cho Wa before you experience a marked improvement.

I wanted the reply to Mr. E. and ask if he atributes increased sexual abilities at 68* plus to Cho Wa? Thanks. Recently discovered Cho Wa.
.

I get up in the mornings feeling refreshed and I do seem to have more energy early in the day. I cut down on caffeine, which I think it’s great for my health, too. I feel more alert and focused. However, I do wish Cho-Wa wasn’t quite that expensive.

I have been drinking ChoWa for some time now and really love the energy and vitality it seems to give me. However, has anyone noticed every feeling anxious or having anxiety after being on the tea for awhile? Just curious…

Yes it is expensive to buy 1 or 3 packages.
The year supply works out to a dollar a day.

I hope that helps

I have used Cho-Wa for many years and may have been one of the first users in the US. Originally, the tea came with detailed instructions about how the tea was to be used and that it should be embedded in a tea ceremony in order to be fully effective. I have followed these instructions religiously, knowing that this formula has spiritual underpinnings. The tea exudes powerful energy, which is palpable to an energy sensitive person. This energy cannot be explained with the listed ingredients alone. There must be something else in the formula, something of a more subtle nature.… Read more »

I find this tea very interesting. Cho-wa has enhanced my smelling abilities and my tasting abilities. also Cho-wa quiets the tremor in my hand . it puts me at rest with alertness at the same time. only took it three days so far

I had trouble concentrating during the afternoon because my energy level would be too low. I’ve tried everything. This tea seems to do a great job in picking my mood up and keeping me energized for at least 4 hours.

I’ve had troubles sleeping ever since high-school. I believe it is because I am almost permanently controlled by this anxiety and nervousness. This tea brings me some comfort, but it would not be half as effective if it wasn’t for the other herbal medicines I am taking at the same time. All in all, this is ok.

I bought three boxes of Cho Wa a few years ago when I was having stomach pains. It helped tremendously. I used about 1 1/2 boxes and put the rest away after the issue was resolved. Recently my hair started falling out in gobs and I suspected it was stress related. Even though the Cho Wa box had an expiration date of a year ago, I started using it again. The exact day I began drinking it, my hair stopped falling out. I thought it was a coincidence or just great luck until I saw my acupuncturist who muscle tested… Read more »

My experience with using Cho Wa tea and in sharing it with others is that some people notice positive benefits from drinking it right away and others, don’t notice anything. The first time my fiance and I drank the tea, we both noticed an euphoria come over us within about two minutes. I also, noticed a mental alertness with improved energy as I have some “fatigue” issues. My fiance drinks it as it helps keep body pain down. We drink the tea almost daily and wouldn’t be without it; however, it doesn’t seem to work for everyone. I’ve never had… Read more »

I’ve been using Cho-Wa for years and I really have to say I’ve never found anything else that works so well. God knows I’ve tried, too, ’cause the stuff’s expensive. I justify it by noting that it costs way less than getting Starbuck’s every day, yet makes me feel way better – you feel really light and fresh with lots of energy, but there’s never any jitters or crash like with caffeine. The flavor was kind of off-putting at first, but I couldn’t help noticing how revitalized I felt, so I made myself give it an honest try. Pretty soon… Read more »

This product work for me in loosing weight (178lb) to (155)lb in about 4 months and I drink the tea
everyday. It also gave me energy and it is sooooooo awesome.

i have been using Cho Wa for about 3yrs and i have to say it is a unique product in the sense as to how it makes me feel. I notice that it is more effective if taken at about noon on an empty stomache. the instructions say to take it in the morning when u wake. I have not gotten much of an effect doing that. For me if i wake up and feel crappy, cho wa will not help me feel any better but if i wait until i feel better and am awake at about 11 or… Read more »

Angela when you get the herbs to make your own version of Cho Wa,could you post here the rite amounts and the ingrediances on how to make your own.That would be really cool,thank You

The products works wonders for me!! I have diabetes and am very low energy, I only bought a one month supply and it was like night and day!! It even improved my mood. I can’t afford to buy more, but with the help of local herb stores I’m making my own.

Title for your comment
Great tea
Have you tried this product?
Yes
Reply 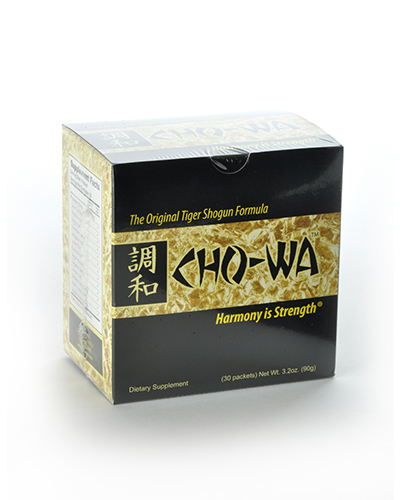 Cho-Wa or HCF?
Click Here to Find Out Menu wpDiscuz