Kali Phos Review – 8 Things You Should Know Before You Buy

Kali Phos is a brain supplement advertised as a nerve tonic, supposed to help the brain work at its full capacity regardless of stress, fatigue and other extraneous factors. The supplement is produced by Hyland’s, a company that deals in Homeopathic Medicine and claims to have a product span of approximately 3500 products, despite the fact that they only list roughly 100 on their website.

Founded in 1903 as a pharmacy in Los Angeles, Hyland’s has kept a keen eye on their range of products, focusing on natural medicines despite societal pressure of conformance to conventional medicines. They started off as the sole pharmacy to distribute products developed by the Standard Homeopathic Pharmacy, eventually ending up buying the latter and expanding from a pharmaceutical distributor to being a producer as well.

The main ingredient in Kali Phos is Potassium Phosphate, a class of substances known for their capacities of increasing energy levels in the human body. The company also claims that the ingredient “feeds the nerves”. According to Hyland’s, Kali Phos helps reduce stress levels, releases tension and increases the quality of sleep for consumers.

A known effect of Potassium Phosphate is urinary acidification and lowering the concentration of calcium in the urine; it is also reported to increase the antibiotic efficiency of methenamine. It is highly discouraged for people suffering from kidney diseases, high levels of phosphorus or potassium or infected phosphate stones to take this supplement.

There is little documentation regarding the tonic effects of Potassium Phosphate, making it unclear whether the Kali Phos reaches its goal or not.

2) What Are Kali Phos Ingredients?

3) Does Kali Phos Work and it is Safe?

According to the manufacturer’s website, the use of Kali Phos which is herbal and mineral allows the nerves to have a way to calm down and to be healthier than before. This product is recommended for those that suffering from anxiety, high levels of stress, feelings of sadness or hopelessness that linger, head or back pain that is due to stress, and the inability to sleep due to the compiled feelings of stress and restlessness.

The Pick Me Up Cell Salt (potassium phosphate) is what the product known as Kali Phos is often known by. This is due to the high level of potassium found in it. There have been studies to show higher levels of potassium phosphate on a daily basis can help a person to have more energy than they did before. It is stated on their site that this ingredient feeds the nerves.

This product is to be taken daily with the recommended dose one or two capsules. While not suited for children, teenagers may purchase and use the product without any side-effects. This is stated as a nonhabit forming product.

The use of Kali Phos allows the nerves to be able to provide more nutrients for the cells. It is claimed that this is how the product can improve mood, calm the nerves, release tension, and help someone sleep better than they have in a very long time. Hyland’s wasn’t able to establish credible evidence of studies and data that show this particular combination of ingredients in this format can provide people with the benefits that they claim Kali Phos offers.

6) How Much Does Kali Phos Cost?

The cost of Kali Phos is very inexpensive. A bottle of 500 tablets can cost up to $ 9. The recommended dose is two tablets a day, but the website does state that a person can take up to 4 of them daily. No matter the dosage, one bottle can last up to several months, allowing you to keep your mind at ease.

The recommended dosage is two tablets each day, but it is stated that it can be increased up to four each day. It is not recommended for children, however teenagers, adults and elderly people should be able to ingest it without risks.

8) Our Final Take On Kali Phos

Reports so far suggest that Kali Phos’s effects extend from ameliorating headaches and providing stress relief to improving brain energy levels and concentration capacities, as well as several other symptoms of stress, depression and fatigue. Unfortunately, there isn’t enough research to fully support these claims yet, with the product still being in testing, so caution and personal research is recommended before deciding whether Kali Phos is the right option for you.

If brain health and overall well-being are your goals, trusting the science is the first step you need to take.
Featured

Yet, what about our top pick for 2020? There are lots of great brain supplements out there - right? HCF® Happy, Calm & Focused is one of the best brain supplements we've seen so far. Its unique FQ formula (15+ high-purity, nutraceutical-grade amino acids, and associated neuro-nutrients) supports focus, attention, mood, and energy.

The company behind HCF® Happy, Calm & Focused is so confident that this product works, they are currently giving a free sample. 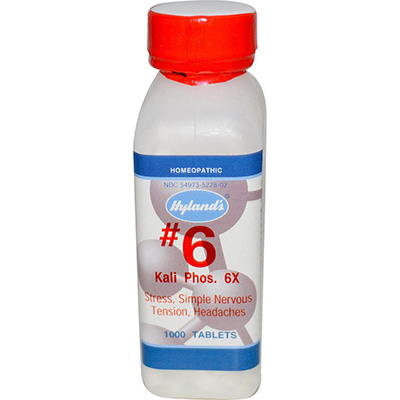 clear
Q:
What are the core ingredients in Kali Phos?
A:

Kali Phos is an herbal and mineral supplement, manufactured by Hyland's. The product is designed to allow the brain to perform at its full capacity as it is supposed to. This product is recommended for those suffering from anxiety, high levels of stress, feelings of sadness or hopelessness that linger, head or back pain due to stress, and the inability to sleep due to the compiled feelings of stress and restlessness.

While the product itself is still in its testing phase, Kali Phos and its main ingredient potassium phosphate, helps nerves recover, relax and regain strength. Some users say it combats illness, stress, as well as injury consumed in the recommended dosage. While most testimonies revolve around the nerve calming or buzzing relief of the product, including nervous headaches, backache, sciatica, neuralgia and buzzing in the ears, there are a few extreme claims of Kali Phos fighting blood cancer. As mentioned earlier, the product is still being tested, and the extent of certainty to these allegations is not 100%. Clearer results will be released soon, but until then, we hope you will share your personal experience with us and support our community.

These little pills are nearly as good as a massage when it comes to stress relief. Works wonderful when I have been studying too much or been a hectic day. Take before bed to wind down, or whenever I feel tense or overworked. Particularly good for mental fatigue or stress. Tried a couple times when I felt irritable and seemed to help as well.