Intelectol is a dietary supplement advertised as the purest form of Vinpocetine available on the market. The manufacturer of the formula is a company called Memory Secret, which claims the main benefit of Intelectol is memory enhancement.

Memory Secret is an American company located in Miami, Florida. Memory Secret was founded in 2002 to promote the benefits of natural ingredients to enhance brain functions. The company manufactures and markets Intelectol, but also licenses patented memory technology to major players and manufacturers of the nutritional industry.

The supplement can be used as a memory enhancer or as a way to prevent brain function deterioration. People who experience cognitive deterioration or young people and students who want to enhance their memory to increase their intellectual capacity can benefit from Intelectol.

Intelectol is a single ingredients formula based on Vinpocetine. Vinpocetine is a semi synthetic chemically processed derivative alkaloid of Vincamine, an extract from the periwinkle plant.

Vinpocetine has been the topic of numerous research studies and clinical trials. Evidence suggests that it works by dilating blood vessels hence improving blood circulation in the brain and facilitating cerebral metabolism. Also, it increases the consumption of oxygen and glucose by the neurons, as well as the concentration of neurotransmitters essential to memory formation process.

Other potential uses of Vinpocetine include anti-inflammatory effects (may reduce lung inflammation), hair loss treatment, eye and ears conditions and vertigo. Its cognitive abilities is however why it is most often prescribed. Current research is focusing on determining if and to what extent Vinpocetine may help treat memory impairment associated conditions, such as Alzheimer’s.

Vinpocetine is generally well tolerated by patients and has few reported side effects. The most common side effects reported so far are stomach nausea, pain, sleep disturbances, dizziness, headache and nervousness. Also, it may slow blood clotting, hence increase the risk of bleeding.

3) Does Intelectol Work and it is Safe?

As stated above, Intelectol is advertised as the purest form of Vinpocetine available on the market at this moment. Vinpocetine is a semisynthetic derivative alkaloid of vincamine, an extract from the periwinkle plant.

Evidence suggests that Vinpocetine has cerebral blood-flow enhancing and neuroprotective effects. This ingredient is commonly used in Eastern Europe as a drug for the treatment of cerebrovascular disorders and age-related memory loss.

This substance is often used as a memory enhancer, and it works by activating cerebral metabolism. According to recent research, Vinpocetine may help support brain functions such as concentration and memory. A low initial dosage is ordinarily recommended.

Vinpocetine is well tolerated by patients with very few reported side effects. The only noticeable side effect, in a very small number of cases, is a slightly upset stomach.

There are testimonials about Intelectol posted online. What is being reported includes the following:

5) What You Need to Know Before Taking Intelectol

Each pack of Intelectol contains 50 tablets, which should be enough for 15 days of treatment for the average user. Two packs are required for a full month of treatment. Taking this into consideration, Intelectol can be described as an expensive supplement.

Intelectol reviews praise the formula’s effectiveness, with consumers reporting no side effects. The recommended dose is 2 capsules a day.

Intelectol is one of the many memory enhancer dietary supplements based on or containing Vinpocetine. The formula is claimed to contain the purest form of Vinpocetine, however the manufacturer brings no evidence to support this claim.

Consumer testimonials for Intelectol are however positive, with consumers confirming Intelectol’s effectiveness. We may therefore admit that it will work for some consumers. Caution is advised for people who are about to have surgery or have a blood clotting problem, since Vinpocetine may slow down blood clotting and determine bleeding.

This is why we recommend you get a specialized opinion before starting using Intelectol.

We're happy to have you here checking out ways to optimize your brain health. Consider products specifically formulated to promote focus.
Featured

When it comes down to benefits, one of the products we like the most is HCF® Happy, Calm & Focused. We love the unique FQ formula (15+ clinically proven, pure & effective associated neuro-nutrients) and its benefits in supporting mood, focus, and attention.

The company behind HCF® Happy, Calm & Focused are currently offering a free sample as a sign of confidence in their supplement. 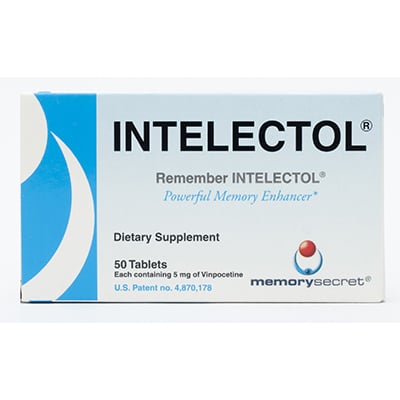 clear
Q:
What are the active ingrediens in Intelectol?
A:

Q:
Are Intelectol benefits actually a reality?
A:

Intelectol has received numerous positive reviews and testimonials, many consumers reporting improvements within days. However, the price per tablet may be discouraging for some. Without a free trial sample and money-back guarantee, Intelectol can become a risky and expensive investment. Therefore, we advise our readers to further research into this formula and, if possible, to consult with their doctor before making a final decision.