Fusion Health Ginkgo 6000 is marketed as a high potency standardized extract of Ginkgo Biloba designed to improve circulation and assist with mental performance. Particularly, the formula will improve memory, concentration and learning abilities and will help prevent age-related cognitive impairment.

Fusion Health Ginkgo 6000 is suitable for young people who wish to stay mentally sharp and prevent age related mental decline but also to and senior adults who wish to fight impairment in mental performance caused by aging. The formula is not recommended to pregnant women or for patients with epilepsy. The main ailment claims made by the manufacturer include mild dizziness, mild tinnitus (ringing in the ears), walking intolerance and poor peripheral circulation (cold hands and feet).

Fusion Health, the manufacturer of the formula, claims to combine traditional medicine principles and ingredients with modern science discoveries and herbs. The company is located in Sydney, Australia and manufactures a variety of supplements in compliance with the latest guidelines from the Australian Therapeutic Goods Administration (TGA).

Fusion Health Ginkgo 6000 is a powerful formula based on the standardized extract of Ginkgo Biloba. The formula contains the equivalent of 6000 mg Ginkgo Biloba leaves and is standardized to a concentration of flavonoglycosides of 28.8 mg. The product contains no artificial colors, flavors or preservatives, yeast, gluten wheat, nuts, dairy or animal products, making this suitable for vegetarians also.

Ginkgo Biloba has been traditionally used by Chinese medicine practitioners for its blood circulation enhancing properties. It is known to enhance both cerebral (brain) and peripheral (limbs) circulation.

Modern medicine revealed that there are roughly 40 components in the Ginkgo tree leaf. The most important from a medical perspective however are the Flavonoids and the Terpenoids. Flavonoids are plant based anti-oxidants. They also possess antiviral, anti-allergic, anti-inflammatory and anti-tumor properties, although research is in its early stage. The anti-oxidant property may help cells fight free radical damage, thus aiding to prevent a number of oxidation related problems (neurodegenerative diseases such as Alzheimer’s, atherosclerosis or inflammation). Terpenoids are known to help improve blood flow by dilating blood vessels.

Ginkgo may interact with medications which lower blood pressure, therefore caution is advised. There are reports that suggest Ginkgo may raise the risk of seizures among people with epilepsy and that it also may reduce the effectiveness of anti-seizure drugs.

Promoted as a powerful formula that is based on standardized Ginkgo Biloba extracts, Fusion Health Ginkgo 6000 contains the equivalent of 6000 mg of Ginkgo Biloba leaves and has been standardized at a 28.8 mg flavone glycosides concentration. Manufacturers claim that this remedy contains no flavors, artificial colors or preservatives and is also suitable for vegetarians.

Traditionally used in Chinese medicine by practitioners, Ginkgo Biloba has benefits related to circulation enhancement. Also, it is regarded as both peripheral and cerebral circulation improver. Modern medicine has revealed that there are at least 40 components in Ginkgo Biloba leaf, among these the most important being terpenoids and flavonoids. Flavonoids are anti-oxidants that possess anti-alergic, anti-inflammatory and antiviral qualities. These properties may help human body cells fight against free radicals, therefore helping prevent some problems related to oxidation, such as atherosclerosis and Alzheimer’s. Terpenoids are viewed as helpful, because it dilates blood vessels, thus enhancing circulation.

People should be aware of the fact that Ginkgo can interact with medication for lower blood pressure, thus it is advised to avoid it if they’re under this treatment. Also, Ginkgo consumption may lead to other unwanted side effects, including nausea, vomiting, and restlessness.

Because there are no available online client testimonials, the product’s efficacy cannot be stated.

Fusion Health Ginkgo 6000 can be purchased by bottles containing 60 capsules. A bottle is enough for a thirty-day treatment. Even though its price is viewed as moderate, people may make it more affordable by purchasing larger quantities.

No consumer reviews are available online. The recommended dosage is 1 tablet daily. No Fusion Health Ginkgo 6000 side effects are mentioned by the manufacturer; however, there are some precautions and drug interactions warnings issued.

Fusion Health Ginkgo contains Ginkgo Biloba standardized extract and is designed to promote mental performance and circulatory system health. Ginkgo Biloba is an extremely popular herbal ingredient, on which research and clinical trials have been conducted extensively. This product however brings no argument to its uniqueness and differentiation from other Ginkgo products.

No Fusion Health Ginkgo 6000 consumer reviews are available either; therefore an honest assessment of its effectiveness cannot be made. Caution is advised for certain categories of patients when using any kind of Ginkgo supplementation, particularly to those under blood thinning medication, under seizures treatment or pregnant and nursing women.

For maximum safety, we recommend a healthcare provider is consulted prior to beginning use.

Although making lifestyle changes can be hard, they don't have to be if you consider a supplement that's created with superior ingredients.
Featured

When it comes to emerging standards in the brain supplementation industry, HCF® Happy, Calm & Focused is one of the highest praised products we've seen in years. Its unique FQ formula (15+ high-purity, nutraceutical-grade amino acids, and associated neuro-nutrients) offers a lot in supporting mood, energy, focus, and attention.

BrainReference readers can now get free sample of HCF® Happy, Calm & Focused for a limited time - no strings attached. 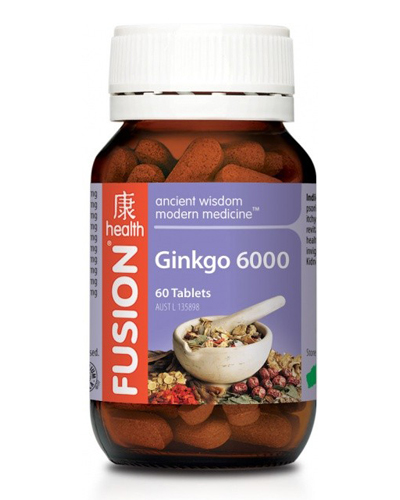 clear
Q:
What are the active ingrediens in inkgo 6000?
A:

Fusion Health Ginkgo 6000 is a product that contains only standardized Ginkgo Biloba extracts and is designed to enhance mental functions and overall circulation. Because Ginkgo is a popular herbal ingredient, its properties are widely known. However, this particular remedy brings no argument to its uniqueness, and it doesn't differentiate from other Ginkgo products. Cautions related to its treatment refer to people who take blood thinning medication, pregnant or lactating women or people that have seizures. For optimal results, people should balance this remedy with a healthy lifestyle that includes a good exercising program as well as a proper diet.

I have been using it since last summer and it’s great for focus.