Immutol is an immune system booster. The dietary supplement is sold under the Immunocorp label. Immunocorp exclusively sells the products developed by the parent company SanaPharma. This is a Norwegian company located in Oslo which uses a specific patented extraction process to obtain Beta Glucan, a compound believed to possess incredible immune boosting qualities.

Each capsule of Immutol delivers 375 mg of what the manufacturer describes as “the most potent natural immune-supporting substance on the planet”, namely the Norwegian Beta-1,3/1,6-Glucan (NBG). NGB is a highly purified form of Beta Glucan that is extracted from the cell walls of baker’s yeast keeping it in a fully intact form.
The producer goes as far as to state that NBC is in fact the purest, most active, and most effective Beta 1,3/1,6 Glucan available at this time. Still, upon a detailed online research of the compound we weren’t able to find many scientific studies or clinical trials on humans that would indeed confirm the manufacturer’s claims. There are of course some trials that strongly support the benefits of Beta Glucan on the immune system’s activity, but it is simply not enough to prove the complete effectiveness and safety of the compound.

Immutol is based on a single active chemical- a form of Glucans which are macromolecules composed of carbohydrate glucose. They have numerous naturally occurring forms, but they vary widely in both structure and properties. Beta Glucans are a type of glucans which is actually the one with immune boosting effects. They can be extracted from various sources such as the cell walls of fungi, bacteria, algae, yeasts, lichens, or some plants such as oats and barley. They are generally used to boost immune function in patients who suffer from HIV/Aids, chronic fatigue syndrome, or those who have gone under radiation or chemotherapy treatment. These substances are also used to treat cancer sores, lower cholesterol, or reduce diabetes symptoms, prevent infections after surgeries, and treat various skin conditions (including eczema, dermatitis, wounds, or burns).

Immutol’s effectiveness comes directly from that of its active substance which is Norwegian Beta 1,3/1,6 Glucan. Beta 1,3/1,6 is the most researched form of Glucans at this time. The latest experimental findings show that this form is a biotic activator that acts on a specific type of white blood cells. White blood cells are specific to the immune system and they are in fact the ones that identify potentially harmful foreign molecules, triggering the immune response that will eventually eliminate these threats.

Clinical trials in humans have confirmed the results obtained in vivo and in vitro studies. The immune boosting benefits of Beta Glucans are incontestable and there were no adverse reactions of oral intake identified. However, we must not oversee the fact that research is only at the beginning and there is much information to be gathered before making a final statement.

Immutol’s suggested dose is of 2 capsules taken up to three times daily, with meals

Immutol is sold directly by the manufacturer for the standard price of $59.95. Discounts for up to 50% are offered for orders that exceed 3 bottles (30% discounts for three bottles, 40% for 6 bottles, and 50% for an order of 9 bottles). However, the product is sold cheaper by other online retailers who probably purchased bigger quantities at discounted prices, and sell them individually for lower prices than the manufacturer. One bottle contains 60 capsules, so at a maximum daily dosage, one bottle will only provide a 10 day supply. The manufacturer ensures free shipping for US customers who order more than 3 boxes. The standard shipping tax is $6.95.

Beta-Glucans mechanisms of action have been studied and scientists managed to identify how they are able to enhance macrophages and natural killer cell function, protect against potent genotoxic carcinogens, and inhibit tumor growth. Although research is not very advanced at the moment, results are very promising.

Immutol appears to be a top-quality formula based on a patented form of a chemical unanimously recognized for its immune boosting effect. Beta Glucans are believed to improve the body’s defense system due to their ability to interact with certain types of white cells and improve their abilities to fight against external threats.

Unfortunately, although the active ingredient of this supplement is already used in the treatment of various conditions, there isn’t enough scientific evidence to fully justify these uses.

If you're looking to achieve optimal brain health, we suggest choosing a brain supplement with a proven track record.
Featured

Based on a unique FQ formula, HCF® Happy, Calm & Focused was developed with details that no other product can offer. Want high-purity, clinically proven, nutraceutical-grade amino acids, and associated neuro-nutrients - got it. Want a powerful supplement for mood and attention - you got it. And, there's more.

You don't have to take our word for it – you can get a free sample of HCF® Happy, Calm & Focused and see the results for yourself. 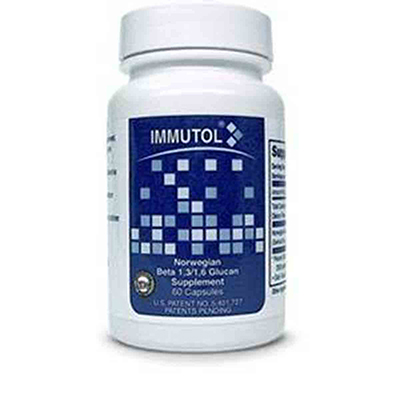 clear
Q:
What are the core ingredients in Immutol?
A:

Immutol is a nutritional supplement designed to support a healthy immune function. The formula is sold by Immunocorp, a subsidiary of SanaPharma, the mother company which is based in Oslo, Norway. The formula owes its health benefits to a single active ingredient, NBT, a type of Beta-Glucan. Beta Glucans are naturally occurring polysaccharides present in the cell walls of various organisms including fungi, yeast, bacteria or plants like oats and barley. NBT is advertised as a patented Beta-1,3/1,6-Glucan which is also the most effective form of Glucan in boosting immune response.

Research involving this type of compounds is merely at the beginning but the results look very promising. Beta Glucans are already used to improve immunity in immunosuppressed patients such as those suffering from HIV/AIDS, physical and emotional stress, chronic fatigue syndrome, colds, flus, allergies, or hepatitis.

Immutol is based on a patented extraction process said to preserve the properties of its active ingredient, the Beta 1,3/1,6 Glucan. This ingredient is a cutting-edge solution for those who are interested in boosting immune function, and it is said to be the most effective one out there.

Unfortunately customer reviews are currently lacking, so we are not sure if the product is as efficient as the manufacturer says.. Scientific findings regarding the ability of Beta Glucan to positively influence immune response are encouraging.

Immutol has helped heal me twice from surgeries. It’s helped heal bronchitis, heal bones faster, cleared up a sore throat and stopped a gravelly voice(over night). Helped a person get into and out of bed, after 1st dose. Helped him walk on his own, without a cane or wheelchair. Took swelling down and took away the pain in foot, within a few hours, from taking first dose. Immutol does so much!

A secret miracle worker! Cured prostate cancer in an 86 year old lifetime friend! His wife started taking it for her hip and eyesight and showed improvement. I am now taking to help my chronic bronchitis. Will report back results