High Potency DMAE formula is created by Swanson Health Products to promote a healthy mental and cognitive function in order to achieve maximum attention and alertness.

Swanson Health Products is an American company founded over 40 years ago by Leland Swanson from its desire to share the benefits of nutritional products with people concerned to maintain their health.

According to the manufacturer, this supplement consists of pure DMAE in a fast-absorbing form. It contains 250 mg of active substance per soft gel, which is advertised as the optimal dose for achieving a healthy cognitive function. Research conducted so far has revealed that DMAE may be a biochemical precursor to the neurotransmitter acetylcholine, although conclusive evidence has not been found so far.

High Potency DMAE is marketed as a very effective product designed for those individuals preoccupied to improve their mental performance, enhance their attention span and increase brain alertness.

High Potency DMAE from Swanson Health Products is a single-active ingredient formula.The main ingredient DMAE is a metabolic compound produced in small amounts by the brain and also found in fish (sardines, salmons, anchovies and pilchards).

It is an essential substance for cognitive health because it supports choline production, which is the precursor of the main neurotransmitter responsible for many Central Nervous System functions such as attention, memory and learning processes. It is believed to have aesthetic, mental, psychological, physical and emotional benefits.

Due to lack of clinical evidence of its effectiveness, DMAE still remains a controversial supplement.The formula is not suitable for pregnant and nursing women. It is also not recommended for people with known medical conditions such as depression, epilepsy or schizophrenia without the consent of a physician.Even though clinical trial evidence is not provided by the manufacturer, the formula received positive reviews from its consumers.

3) What Does High Potency DMAE Do?

Swanson’s DMAE is advertised as a remedy that promotes mental health and healthy cognitive function for optimal alertness and attention. This product contains DMAE. Evidence has shown that DMAE is a compound essential to the production of acetylcholine, a type of chemical that helps nerve cells to transmit signals. Since acetylcholine plays a key role in many brain functions (including memory), it is suggested in a supplementation form that may boost brain health by increasing acetylcholine levels. Some proponents claim that the use of DMAE supplements may help prevent or treat Alzheimer’s disease. Also, this ingredient is purported to boost athletic performance, elevate mood and treat depression, although there isn’t any evidence to support these claims.

Very little is known about the safety of the long-term use of DMAE supplements. However, there are some concerns that DMAE can trigger certain side effects included increased blood pressure, stomach upset, drowsiness, confusion, and irritability. Pregnant or lactating women should also avoid the usage of Swanson’s DMAE.

There are some online testimonials regarding the Effectiveness of this product. What is being reported includes the following:

5) Precautions of High Potency DMAE Use

Swanson’s DMAE is sold by bottles containing 30 soft gels. The price of this product is moderate and can even be considered cheap in comparison with similar products. It is found for purchase on manufacturer website and some other online retailers.

High Potency DMAE contains a quantity of DMAE which makes it sufficient in a once-a-day dose.

High Potency DMAE manufactured by Swanson Health Products is advertised as a support for a healthy cognitive function and mental health. The formula’s effectiveness is claimed to be the result of its composition consisting in a pure form fast-absorbing liquid form of DMAE.

The formula’s effectiveness is not supported by any clinical evidence, nor is it approved by the FDA. However, reviews from consumers report effectiveness in boosting memory (including photographic memory), improving focus, inducing a calm mood and improving the aspect of skin. There are also some precautions to be considered by people who suffer from other medical conditions and who should always consult a healthcare professional before taking nutritional supplements.

If you're ready to improve your brain health, we recommend a product created with superior ingredients.
Featured

Our favorite attention and focus supplement this year is HCF® Happy, Calm & Focused. This product excels at nourishing your brain. Uniquely formulated and using only clinically proven ingredients, HCF works to make your journey towards brain health one you can stick with for the long term.

HCF AminoScience has decided to give all BrainReference visitors free sample of HCF® Happy, Calm & Focused, as a sign of confidence in their supplement. It's only available for a limited time though, so make sure to take advantage while you can! 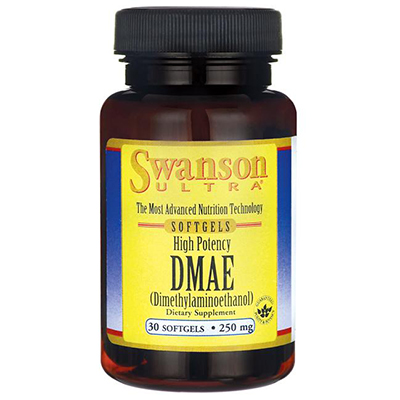 clear
Q:
What are the core ingredients in High Potency DMAE?
A:

Q:
High Potency DMAE is all about what?
A:

Swanson Ultra High Potency DMAE is advertised to be a supplement that aims to promote mental health. The company behind this product is called Swanson Health Products, a North Dakota based business. Swanson Ultra High Potency DMAE is constructed around dimethylaminoethanol bitartrate, a natural neurotransmitter precursor that aims to help sustain alertness, maintain attention or support cognitive function, thus acting as a possible solution for people that need support for good brain health.

Swanson's DMAE is a product that claims to improve the DMAE levels in the body, important for the health of cognitive functions. It promotes mental health for optimal alertness and attention. However, due to the lack of research, its Effectiveness it is not guaranteed. There are some side effects regarding its usage, and if any occur, the consumption should be immediately stopped. Pregnant and lactating women should avoid taking this remedy. For desired results, it should be balanced with a good diet plan and a normal sleep schedule.

this is the right formula for me! highly recommended!