Krill Oil is a dietary formulation that combines essential Omega-3 fatty acids, phospholipids and the potent antioxidant Astaxanthin with the purpose of offering complete support for the memory and cognitive function, eyes, cardiovascular and joint health, skin, energy production and the liver function. The formula manufactured by Healthy Origins seems to suggest a single solution for a multitude of problems, a solution that is not only safe, but natural as well.

Krill Oil is offered for the general use of adults experiencing troubles in one of the areas we have mentioned when listing the benefit claims. The formula prides itself with offering fast release and high absorption rates, while at the same time lacking the unpleasant odor or stringent aftertaste that other krill oil based formulas usually have.

1) Krill Oil at a Glance

Krill Oil is not an original combination of ingredients, however it does promise superior results due to certain production technologies used and the presentation form of the formula. Research regarding krill oil has exploded over the past years, with studies showing its superior value over simple fish oil. This is an extract obtained from the small crustaceans called krill. As compared to fish oil, krill contain EPA in higher rations and feature phospholipids substances that foster absorption of these essential Omega-3 fatty acids. Astaxanthin is one of the numerous naturally-occurring pigments in the class of carotenoids and a potent antioxidant in the fight against free radicals.
Krill oil has been linked to benefits on the heart, circulation and joint and cognitive function. Much of these benefits are linked to the positive effects of EPA and DHA, the essential Omega-3 fatty acids. While EPA is generally associated with positive input s for the heart and the circulatory system (reduced risk of coronary heart disease, lowering high blood pressure, downsizing inflammation caused by rheumatoid arthritis, reducing symptoms of depression and menstrual pain, etc), DHA is particularly important to brain development starting with the intra-uterine life.

DHA is required for normal cognitive function in adults as well, with low levels potentially leading to conditions like depression, ADD or ADHD.

Most of the Krill Oil reviews available online are available on the manufacturer’s dedicated website. What is being said includes the following:
Easy to swallow, effective capsules that help me go about my day as naturally as possible
Love this supplement because I can finally keep my cholesterol at a normal level

2) What Are Krill Oil Ingredients?

The formula offered by Healthy Origin is similar to many other offered by competitors, due to the large popularity that krill oil has enjoyed over the past years. Omega-3 in particular enjoys a large number of benefits, while the other two chemicals in krill oil’s composition (Astaxanthin and phospholipids) further support their benefits.

The two essential Omega-3 fatty acids EPA and DHA work both separately and in combination to produce various beneficial effects. Research conducted so far has connected EPA and DHA deficiencies with certain conditions, more or less severe, including anxiety, depression, Alzheimer Disease or schizophrenia. The cognitive function and neural function is also improved by consumption of Omega-3 and many studies now focus on its benefits in the early development stages of the brain and nervous system.

Astaxanthin, a reddish pigment belongs to the carotenoids group. The chemical has been shown to entail superior antioxidant as compared to other natural antioxidants. Astaxanthin health enhancing and support may come in useful in the case of patients who suffer from Alzheimer’s disease, macular degeneration and Parkinson’s as well as other oxidative stress caused imbalances. Research is still ongoing in many of these areas however.

The suggested use dose for this supplement is 1 capsule per day. Usage is restricted for people who are allergic to shellfish, or who suffer from blood coagulation problems. A daily recommended dose for Omega-3 has not yet been established, however research has established certain safe dosage for most adults, which depend on the condition for which the formula is used and condition of the patient.
The formula reviewed here provides 190 mg Omega-3 per capsule, a rather safe dose.

There are testimonials posted online about Krill Oil. What is being stated includes:

I have really noticed a difference in the speed of thinking and clearness of thought. Great product!

5) Precautions of Krill Oil Use

Krill Oil is available in bottles of 60 capsules with two 1000 mg and 500 mg versions being made available for consumers. The 1000 mg version bottles allows for a one month treatment at a daily dose of 1 capsule per day. U.S.A orders that exceed $100 benefit from free shipping, while the price on other orders varies depending on the destination of delivery. No details on a money back guarantee or free samples could be found on the official website of the manufacturer.

Purchase can be done directly from the manufacturer’s website, as well as from other retailers who may offer additional discounts further lowering the unit price of the supplement.

A one bottle-one month supply (60 capsules) comes at an affordable price.

8) Our Final Take On Krill Oil

As it is the case of most dietary supplements, Krill Oil too has to be treated with some amount of caution because there is no research involving the formula as such. Instead, we can evaluate the potential effectiveness of such a formula by looking at the reputation and background of the manufacturer and by analyzing the research that involves the core ingredients.
In the case of the formula being reviewed here, the manufacturer is popular and best known for its high-quality, fair price formulation, and the core ingredient: krill oil, a rising star of research regarding Omega-3 and essential fatty acids health-enhancing benefits.

Krill Oil also promises superior absorption rates, no fishy aftertaste or unpleasant odor. This is what makes it a better choice over most dietary supplements featuring krill oil. Consumer reviews confirm many of the claimed benefits; still, they are posted in large numbers on the manufacturer’s website and should be verified with a healthcare provider’s opinion.

Brain health is a journey, and we know that the first step must include a healthy diet, exercise, and the right support system. Products that promote calm and focus are key factors as well.
Featured

Plus, it’s incredible that BrainReference visitors have access to a free sample of HCF® Happy, Calm & Focused today! 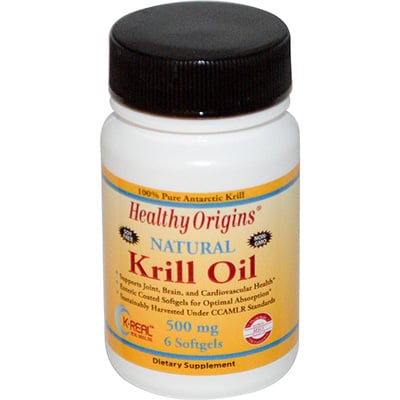 clear
Q:
What are the core ingredients in Krill Oil?
A:

Q:
Krill Oil is all about what?
A:

Krill Oil is advertised as a potent antioxidant formulation which may assist consumers in a number of health issues, including memory and cognitive problems, cardiovascular system problems, liver and skin health and joint health to mention only a fraction of its potential benefits. The formula manufactured by Stop Aging Now is claimed to be produced the latest available technology, ensuring both purity and potency.

Krill oil has been heavily researched and was shown to contain essential Omega-3 fatty acids (both EPA and DHA), phospholipids (which further enhance the absorption rates of the fatty acids) and Astaxanthin, a potent antioxidant substance in itself.

Krill Oil reviews are available on the manufacturer's website more than on other independent websites, therefore should be treated with a fair amount of caution.

Krill Oil bears little differentiation from other formulas who advertise krill oil as core ingredient. While other retailers generally come with innovative additions to a rather standard recipe, Healthy Origins merely markets what everyone else does for krill oil. In a market as competitive as the dietary supplements market, this may be a disadvantage and an opportunity missed to attract new consumers.

Still, the formula seems to be generally well received by consumers who have tried it so far, with positive testimonials being available for online consultation. The benefits of krill oil are well documented by various online and offline research studies which you can access. There are certain drug interactions and potential unwanted side effects (although rare) associated to Omega-3 consumption. This is why we recommend that a healthcare provider's opinion is required prior to starting self treatment with any dietary supplement as safe as it may look.

I’ve been experiencing joint pains from an old injury ever since I can remember, and although I’ve tried other natural approaches, this Krill Oil extract has been the best so far. I also appreciate all the research and thought the company has put into creating this supplement

I have been using this formula for 2 months now and the results are incredible I must say – improved concentration capacity and lower cholesterol are just the ones I can easily measure.