Marketed as a source of natural iodine, Golden Glow Kelp is a dietary supplement based on the properties of Kelp, seaweed originated from the cost of Iceland, Hawaii, and Pacific North America. The manufacturer of this product is the reputable Australian company Golden Glow. According to the company, the product is designed to maintain the health of the thyroid function and support thyroid structure in order to function normally. Iodine is an essential element which enables thyroid to produce certain hormones which regulate metabolism, protein, fat and carbohydrate utilization and body temperature.

The formula’s manufacturer Golden Glow takes pride in its high quality natural health formulas. It claims to have delivered more than 6 million orders worldwide since it was founded in 1976. The company enjoys great popularity among its customers. Also, Golden Glow gives considerable attention to their customer care practices, and offers their clients a 30 day money back guarantee for all company products. The company has also designated a team of naturopaths to answer and consult their customers in the choice and purchase of Golden Glow products. These naturopaths can be contacted online through the company’s official website.

Golden Glow Kelp is designed to be used by adults, except for people suffering from a thyroid disorder which are advised to consult their doctor prior to use.

Golden Glow Kelp is a natural source of Iodine. The formula is claimed to have no added yeast, lactose, gluten, sugar, artificial flavors, sweeteners, colors, dairy products, or animal-derived products.

Kelp is a type of seaweed and has been used for more than a century in the treatment of thyroid problems. The plant has high iodine content, but also features numerous minerals, such as Potassium, Iron and Calcium and vitamins including B1, B2 and B12.

Sever Iodine deficiencies can lead to hypothyroidism, while less severe deficiencies may increase the risk for brain disorders and severe goiter (thyroid enlargement), and cause problems in movement, speech and hearing. While synthetic iodine is largely spread today, kelp remains a good source of dietary iodine, still successfully used in thyroid treatments.

Scientific research on the benefits of Kelp is limited; however, the plant enjoys great popularity. Kelp is also recognized for other uses including prevention of estrogen-related cancers (ovarian and endometrial cancer), cholesterol reduction, infection prevention, and protection from toxic heavy metals exposure such as Cesium, Barium and Cadmium.

The suggested dose of for adults is one tablet daily, preferably taken with food. No side effects or drug interactions are mentioned for Golden Glow Kelp.

Golden Glow Kelp is advertised as an excellent natural source of Iodine, an element which is essentially important to the normal functioning of thyroid. Iodine deficiency is uncommon in U.S., however it is on an upward trend and preventive measures should be taken. Iodine deficiencies may lead to serious health problems and hormonal imbalances. The formula offered by Golden Glow is free from artificial elements and most common allergens, hence it is a natural alternative to synthetic Iodine supplements. Although the formula’s effectiveness is not confirmed by any consumer testimonials or clinical trials, it is likely that the product will work and deliver its advertised benefits.

My doctor recommended me Kelp to compensate an old Iodine deficiency. I prefer natural supplements to synthetic ones, so this is great for me. My nails are stronger, my energy is up and these are only a couple of benefits of Kelp! 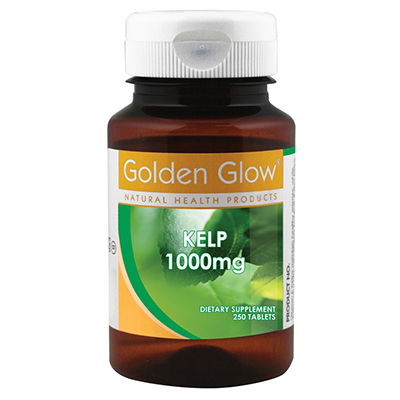