Dolomite is advertised as a dietary supplement which contains a single ingredient with the same name, Dolomite. The formula manufactured by Golden Glow is a natural source of Calcium and Magnesium and is advertised to help strengthen bones and support the health of the skeletal structure. The formula comes in the form of chewable tablets. Because the product has been discontinued, the official site no longer contains information about the product, hence we do not have access to any other information that the manufacturer might have disclosed on the formula.

The company behind this product is one of the largest and most popular manufacturers of dietary supplements and homecare products In Australia. The company offers numerous additional services to its customers, such as the 30-day money-back guarantee available for all its products. In addition, Golden Glow has brought together a team of naturopaths, who can be consulted for free though the company’s website by any customers or potential customer of the company. The Golden Glow product portfolio includes dietary supplements such as herbal and homeopathic remedies, sports nutrition, vitamin and mineral formulations, as well as home care and personal care products.

Dolomite is recommended to be used by adults.

Initially used as a source of Magnesium and Calcium for animals, Dolomite was later used in human supplementation as well. In the early 80’s; however, several research studies pointed out that Dolomite contains substantial amounts of toxic elements such as arsenic, mercury, lead and cadmium. Its popularity subsequently declined since then

Calcium and magnesium are two of the most important minerals required by the body to function normally. Calcium benefits the nervous system, the heart muscles, and plays an important role in blood clotting function. Low levels of Calcium are known to trigger osteoporosis, a serious bone disease. Besides the fact that it helps with Calcium absorption, Magnesium is also important to maintaining the health of the neurological function, prevent or slow down progression of Alzheimer’s and Parkinson’s disease, alleviate insomnia, migraines and constipation.

There are certain safety concerns regarding the use of Dolomite. Patients who suffer from epilepsy, thyroid conditions, kidney problems, sarcoidosis, heart conditions as well as pregnant and breast-feeding women are advised not to use it.

3) Does Dolomite Work and it is Safe?

Dolomite by Golden Glow was designed to be a supplementary source of magnesium and calcium carbonate.

Dolomite is a form of limestone, widely found throughout the world. It is rich in magnesium carbonate and calcium carbonate and also contains small amounts of phosphorus, chloride, potassium and other trace elements. Dolomite is a sedimentary stone, formed from the shells of tiny sea animals that have been deposited in the sea over millions of years. This limestone has long been used as an animal feed as it is a rich source of magnesium and calcium. Today, it can be taken as a dietary supplement for people who want to increase their calcium and magnesium intake, being available in both chewable wafers and tablets.

The manufacturer recommends chewing two tablets of Dolomite twice daily, or as directed by your healthcare professional.

5) Precautions of Dolomite Use

Although this product is relatively expensive, it has great value. Each bottle of Dolomite contains 250 chewable tablets, enough for more than four months of treatment.

This product can be acquired from numerous sources, including the manufacturer. Both online and offline retailers sell this product at various prices. Golden Glow offers a 30-day money back guarantee for unsatisfied customers.

8) Our Final Take On Dolomite

A healthy nutrition is an essential part of a balanced lifestyle, together with physical activity, normal resting periods, and other factors. Minerals and vitamins are the basis of a proper nutrition and many times supplementation is needed in order to reach the optimum recommended levels. Dolomite is a natural source of two of the most important minerals: Magnesium and Calcium. However, its popularity has decreased because it was shown the salt also contains several toxic ingredients and because other readily available sources of magnesium and Calcium have been discovered. Dolomite has been discontinued for reasons which are undisclosed by the manufacturer. 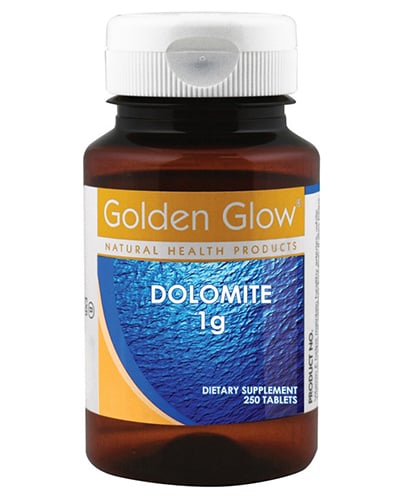 clear
Q:
What are the Dolomite ingredients?
A:

Q:
Dolomite is all about what?
A:

Dolomite is a dietary supplement advertised to support the health of the bones and skeletal system. The formula is manufactured by Golden Glow, an experienced Australian company. Dolomite is a form of limestone rich in both Magnesium (approximately 12%) and Calcium (approximately 24%). The substance received some bad publicity in the 1980's when it was discovered it contains traces of arsenic, mercury and lead. Currently Dolomite is discontinued with no reason disclosed by the manufacturer.

Although the use of dolomite in dietary supplements is not well documented, it is a rich source of calcium and magnesium and its use in pure form has not been associated with toxicity. Dolomite by Golden Glow has the potential to be a good source of magnesium and calcium, as the minerals from it are well absorbed in animal models. We advise our readers to investigate the formula further before making a purchase.

I took dolomite for a number of years without having any problems. Unfortunately Golden Glow has discontinued this formula so now I switched to another brand.