Ginkgo Smart Maximum Focus and Memory is designed as a dietary support for mental alertness, while providing essential nutrients for an optimal functioning of the brain.

The product is manufactured by Irwin Naturals, a company activating in the healthy food industry, which prides itself with the development of new innovative lines such as Irwin Organics and Irwin Ayurvedics.

The product comes in the form of softgels filled with a liquid composition consisting of a blend of ingredients which work together to ensure a healthy cognitive function. Among the core ingredients the manufacturer mentions Vinpocetine, Huperzine, Ginkgo Biloba, amino acids and essential Omega 3- fatty acids. In addition, the formula contains antioxidant substances which ensure neuronal protection.

Ginkgo Smart Maximum Focus and Memory is intended for the use of adults only.

1) Ginkgo Smart at a Glance

Ginkgo Smart Maximum Focus and Memory is a blend of several herbs, amino acids, antioxidants and other substances which have the capacity of enhancing cognitive function in order to achieve maximum mental edge.

The Ginkgo Biloba extract has been used as medicinal ingredient for centuries. One of its most beneficial effects has been observed on clogged arteries, where daily use has been demonstrated to significantly improve its symptoms. Another important role of Ginkgo is in the treatment of Alzheimer’s disease symptoms (dizziness, absent-mindedness and depression), although conclusive evidence is still required.

The antioxidant protection is conferred by the Alpha Lipoic Acid which neutralizes the harmful effects of free radicals.There is no proof that Ginkgo Smart Maximum Focus and Memory has been the subject of clinical studies.

2) What Are Ginkgo Smart Ingredients?

3) Does Ginkgo Smart Work and it is Safe?

The formula is a mixture of various herbal and non-herbal ingredients. It contains the herb Ginkgo Biloba that, according to some recent studies, may improve the functionality of the brain.

Unfortunately, while the supplement’s makers suggest that it contains nine of the most important cognitive enhancers, according to our findings this formula uses some low level elements and extracts. As we have stated above, Ginkgo Biloba is often thought of as being a heavyweight memory enhancer, especially because of its ability to support the blood circulation to the brain. However, the lack of conclusive research performed certainly does not help this statement. Furthermore, several studies sponsored by Irwin Naturals showed positive results, but independent studies subsequently demonstrated that Ginkgo Biloba yields the same results as placebos.

As a plus, this formula also contains Vinpocetine, an element that has been shown during multiple studies to be able to augment cerebral blood flow and enhance cognitive function dramatically. Both these ingredients ability to cross the blood-brain barrier is, however, questionable, making them weak and ineffective in the long run.

Choline and DMAE are used to support the body’s supply of the neurotransmitter Acetylcholine. But again, just like in the Ginkgo Biloba case, their abilities are rather inconsistent. In fact, many experts suggest Alpha GPC instead for better results, a substance which has been shown to positively affect a whole host of cognitive issues, including focus and alertness, learning, and short and long-term memory.

The daily recommended dose of this brain supplement is two capsules. Some consumers may experience nausea, constipation, dry mouth, or insomnia when using this product. Anyone who uses prescription medications needs to talk to their doctor to be sure it is safe to use this formula in conjunction with them.

5) Precautions of Ginkgo Smart Use

A bottle of 90 gel caps costs between $12 and $15, depending on the retailer. One bottle should be enough for 45 days of treatment. No details on a potential money back guarantee post-purchase are offered.

The recommended use is 2 liquid-softgels daily.According to the State of California, this product contains a chemical which may cause reproductive harm and birth defects. The name of this substance is not revealed.

Ginkgo Smart Maximum Focus and Memory formula is advertised as a solution to obtain and maintain optimum mental edge. It consists of a blend of researched substances, herbal and animal based and naturally-occurring substances in the human body.

The formula is advertised as a top and award winning product. It is only targeted to adults over 18 years of age. It is not recommended for pregnant and nursing women. People under any other medication should consult their doctor in order to know the risks of their interactions.

It is not an FDA approved formula and no evidence of scientific testing is provided by the manufacturer.

We're happy to have you here checking out ways to optimize your brain health. Consider products specifically formulated to promote focus.
Featured

Talking about the new industry standards, HCF® Happy, Calm & Focused is one of the top brain supplements we've reviewed in years. Unlike far too many products, HCF's unique FQ formulation can offer a lot in supporting cognitive health and general well-being. 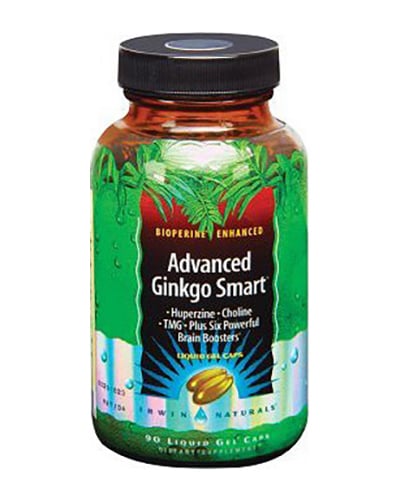 clear
Q:
What are the core ingredients in Ginkgo Smart?
A:

Q:
What is Ginkgo Smart?
A:

Ginkgo Smart Maximum Focus and Memory is advertised as an effective formula that was specially formulated to help boost memory, mental clarity and focus. It is manufacturer by Irwin Naturals, a well known company that invested heavily in research and cutting edge formulas. The manufacturer claims that Ginkgo Smart Maximum Focus and Memory is highly effective in enhancing memory, supporting mental clarity, concentration and focus. The supplement is available in easy-to-swallow softgels, which can easily be absorbed into the system. Ginkgo Smart Maximum Focus and Memory is claimed to not cause any sort of stomach distress. It contains Fish Oil, Acetyl L-Carnitine, Choline, Alpha-Lipoic Acid, and Vinpocentine. The recommended dose is 1 to 2 liquid soft-gels, with a glass of water, before breakfast.

The fact that Advanced Ginkgo Smart contains Ginkgo Biloba may be a huge draw for individuals who haven't heard that in recent studies it was relegated to placebo status. On the other hand, this supplement also contains Vinpocetine, which means it may have some cognitive enhancing abilities. Unfortunately, Vinpocetine is the only high-quality extract available in this product. Advanced Ginkgo Smart contains many low performing extracts and elements, instead of the top of the line ones like Phosphatidylserine or Alpha GPC. If you are seeking a high-quality memory enhancer, we recommend you look somewhere else. With so many similar products out there, consumers should focus on supplements that are fully researched. Also, individuals should seek products with proven Effectiveness and with some positive testimonials and reviews.

This product helped my ex-husband who had a very mentally demanding job. He never let himself run out of this product. Years later I started to use it, and it makes my mind work as fast and great as it used to when I was 30, and I sleep like a baby too!

I’m not real sure about most of the things they say about ‘supplements’ like this but said ‘what the heck, cant hurt anything to try’, so, I BARELY got thru high school (wasn’t taking it), BARELY passed a technical college course with a C (wasn’t taking it), so I decided to try taking it before starting another college course. Believe it or not I found it is easier now to pay attention to the teacher, pass tests without doing a whole lot of studying, and currently have a 3.75 GPA. So I guess I’ll keep taking it until school is over, cant hurt anything lol

I have read somewhere that Vinpocetine might induce side effects such as reduced immune function and depleted catecholamine levels leading to depression. Did somebody heard about this?

Vinpocetine is possibly safe for most people when taken by mouth appropriately, short-term. Vinpocetine can cause some side effects including nausea, sleep disturbances, stomach pain, headache, nervousness, dizziness, and flushing of the face. Vinpocetine may weaken the immune system in some people but this is a very uncommon side effect.

My memory, my attention works better since I took Gingo Smart. It helps me to keep mentally alert and that helps me a lot in my job.