Feeling Good: The New Mood Therapy is a self-help book that reveals various techniques for lifting the spirit and developing a positive outlook on life. The paper is written by the psychiatrist David D. Burns, the author of numerous other research studies and specialty books. He is a reputable doctor that has won numerous awards for his teaching and research in the field.

The book is a best-seller in its category and was first published in 1980. It relies on the principles of cognitive therapy, one of the most researched forms of psychotherapy internationally. The reasons why this form of therapy has become so popular result from the fact that it relies on basic ideas that are easy to understand and intuitive. Studies have confirmed the method’s efficacy in reducing depression and anxiety feelings. The efficacy of cognitive therapy is in fact comparable to that of antidepressants, with fewer side-effects.

The therapy’s principles are simple: one’s state of mind is caused by what he thinks of himself. So if a person feels depressed it is because he sees himself as a looser, and his thoughts alone make it impossible for him to overpass that state.

The current version of the book is divided in 7 chapters starting with the “Theory and Research” chapter where the author explains how to become aware of moods and understand them and how to diagnose depression (by completing the Burns Depression Checklist (BDC) and how to interpret the results. The author also provides scientific data proving the book’s superiority in treating severely depressed people as opposed to patients who were treated with antidepressants only. The study included 44 patients and lasted 12 weeks.

David Burns claims that depression is not an emotional disorder as generally claimed, but the result of the person’s distorted image about himself, a negative and pessimistic view that alter his emotional state to the point of becoming its natural state. Negative thinking becomes part of the depressed person’s life, so he becomes unable to see things how they really are. The author refers to a depressed person’s thoughts as “automatic thoughts” as they are the first to run through the depressed person’s mind without any intentional effort.

The second part contains practical applications that gradually help the reader to start building his self-esteem, act when some other person criticizes them, describes ways of defeating guilt and anger, and how to take action instead of doing nothing and remaining in that harmful depressed state.

Part IV analyzes the causes of depression such as different types of addictions (approval or love addictions), or work to which most of us refer when evaluating the success in life.

Chapter V is addressed to suicidal patients and teaches them how to choose life. Part VI teaches the reader how to apply what he learns in theory from this book. Part VII offers information about commonly prescribed antidepressants and guidelines to antidepressant drug therapy.

Although Feeling Good: The New Mood Therapy is a controversial book, there is no doubt it has helped a lot of people in overcoming their depression. The large number of testimonials available online are one proof that this paper has positive effects on its readers. From our point of view, there is no harm in believing that by changing the way you think and trying to look at things from a more positive perspective you can lead a better life. And we believe it is possible to achieve that by applying techniques offered in this book without any side-effects or negative outcomes whatsoever. 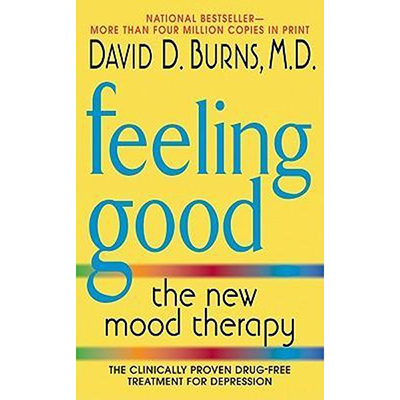