Cyntol Review – 8 Things You Should Know

Cyntol represents a cognitive enhancer that has been advertised since its appearance being an effective builder of defense against decline of the cognitive system, whether it’s linked to age or other factors such as diet, sleeplessness, lacks of exercise, as well as other lifestyle issues. The business behind this remedy is called Progressive Health. They were founded in 1997 and since then have been providing a wide array of nutritional supplements with specific targets on human body areas. The company was established in Aurora, Colorado, United States but they currently possess offices in Boise, Idaho. Additionally, they have call centers for customer service in Michigan, Ohio, California, and Idaho.

As reported by its producer, Cyntol represents a product which allows consumers to achieve their full level of nutritional support in order to enhance their cognitive in a stage closer to the one they possessed when they were younger. Usually when a person ages, cognitive abilities are slowly diminished slowly, the functions and bodily processes will also be reduced and it will become tougher to remember basic things and to properly process information. The manufacturer claims that this supplement may be able to address all the above mentioned problems with few-to-no side effects.

Cyntol represents a blend of herbal extracts and mineral claimed to be able to slow down the aging process which affect the cognitive system. It is also advertised as a potential help when it comes to the enhancement of focus, memory, basically overall cognitive abilities.

This specific formulation features Gingko Biloba, an extract believed by many to be a cognitive enhancer, thus often utilized for cognitive enhancers delivered in a supplementation form. However, it hasn’t been proved as effective in independent trials conducted in laboratories so far. In fact, the majority of these trials have showed it to be a non-entity when the problem of cognitive enhancement interfered.

Another reliable component is Methylcobalamin and is included in Cyntol in order to stabilize the homocysteine levels in the brain. High homocysteine levels are generally linked to dementia. While this addition is considered to be beneficial for the remedy, vitamin B12 is used along with a mixture between vitamin B6 and folic acid because of the increased effectiveness proven in this combination.

Choline was also added to help increase both short-term as well as long-term memory by increasing production of a neurotransmitter called acetylcholine. Choline is able to penetrate the brain-blood barrier (BBB), thus delivering essential nutrients directly to the brain.

Cyntol is an herbal and mineral blend that is stated to help to slow down the aging process of the brain. It is also said to help with improving memory, focus, and overall cognitive abilities.

The formula contains Gingko Biloba, an extract that many believe to be a cognitive enhancer, so it is quite often used in cognitive enhancers. However, it has not been proved to be effective in independent research trials. In fact, many of these trials had shown Gingko Biloba to be a nonentity when it came to enhancing cognitive functions.

Another important ingredient is Methylcobalamin (a version of Vitamin B12) that is included to help stabilize the level of homocysteine in the brain. High homocysteine levels are usually associated with dementia. While this is an excellent addition to the formula, Vitamin B12 is commonly used along with Vitamin B6 and folic acid because this blend has been shown to be quite useful.

Choline was added to the formulation to help increase short term and long term memory, by increasing the production of the neurotransmitter acetylcholine. Choline can penetrate the brain-blood barrier (BBB) and deliver the essential nutrients directly to the brain.

While each ingredient has been researched in the past few years, the Effectiveness of the formula has not been proven. The manufacturer fails to provide consumers with enough evidence of what they have done to prove this mixture is superior to other similar formulas.

A bottle of Cyntol contains 30 capsules, which should be enough for one month of treatment at a recommended dosage of one capsule per day.

Cyntol is a medium-priced product, and it should be available for purchase directly from the manufacturer’s website or from some online retailers. Some retailers may offer additional discounts and even free shipping.

It takes up to 5 days for USA orders to be delivered, up to 21 days for those to Mexico and Canada, and up to 6 weeks for those in other countries. The cost of shipping will vary based on location and will be calculated at the time that the order is placed.

The daily recommended intake of Cyntol is one capsule per day, usually after meals, and with water.

Cyntol may be viewed as a good cognitive enhancer due to the fact that it contains Vinpocetine, Phosphatidylserine, and Choline. This represents a medium-quality formulation and may be a good solution for people who are seeking for a safe, cheap, and effective cognitive booster, particularly for the elderly population. In most cases, consumers have reported noticing some improvement in alertness and focus, but it didn’t offer them the type of memory enhancing gains they were expecting prior to the treatment.

On the other hand, Cyntol lacks a few necessary ingredients that would have made it a great product. This may be the reason why it hasn’t done as well as expected on client rating blogs and sites.

Are you looking to improve your brain health and overall wellness? Science may have the answer.
Featured

HCF® Happy, Calm & Focused is among the best Amino Acids [Blend] we've reviewed in years, and there's no doubt HCF can offer more in terms of supporting calm and focus than any other product we've encountered.

Plus, for a limited time, you can get a free sample of HCF® Happy, Calm & Focused just because you're a BrainReference visitor. 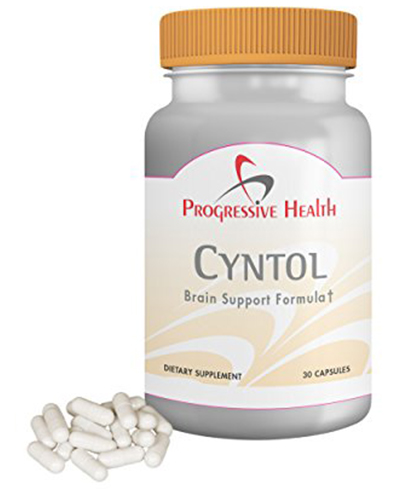 clear
Q:
What are the core ingredients in Cyntol?
A:

Q:
What is Cyntol supplement?
A:

Cyntol represents a dietary supplement offered to the public by Progressive Health which contains a series of ingredients with known individual properties related to the cognitive system. Because most of the times our minds are slowed down by various factors such as aging or pollution, this remedy promises to offer nutritional support. However, most of the times the specification are presented as too beautiful to be true and this is the reason for most of the customer dissatisfaction.

Cyntol may be a good cognitive enhancer because it contains Vinpocetine, Choline, and Phosphatidylserine. This is a medium-quality formula and may be a good solution for those who are seeking for a cheap, safe and effective cognitive enhancer. Consumers often reported seeing some improvement in focus and alertness, but it did not give them the kinds of memory enhancing gains they expected. However, the formula lacks a few necessary ingredients to make it a great product, which may be the reason it has not done as well as expected on consumer rating sites and blogs.

I have had ringing in my ears for ten years. I have pretty much gotten used to it, but recently my left ear started loud buzzing/humming (after getting water in my ear). Went to EarNoseThroat doctor…waste of time. The sound drove me nuts…much worse than the ringing, so I did an internet search for possible nutritional or holistic help. I found a few articles that cited Cyntol as helping this condition because it increases blood flow to the inner ear. Fortunately, so it did. I’m happy I could get over that.