Clear Boost is an all natural dietary supplement advertised to instantly boost energy and increase mental focus thus maximizing physical and emotional balance and power. The formula manufactured by Symmetry comes in the form of individual packets which should be mixed with a drink. The manufacturer claims it is able to provide a safe, fast and effective dose of energy and mental focus, unlike other energy drinks which owe their effect to the content of high fructose corn syrup, caffeine or other stimulants, effect which quickly wears off.

Symmetry is an American business founded in 1995 and committed to developing state of the art products that are able to transform the lives of their patients, both physically and financially. Symmetry is a direct selling company and has offices in over 10 countries all around the world. The company is a member of the U.S. Chamber of Commerce, Better Business Bureau, Direct Selling Education Foundation and other business related organizations.

Clear Boost is designed for adult use only, for everyday use.

Clear Boost mixes several herbal extracts as core ingredients in a formulation which claims to deliver enhanced focus, increased physical energy and a balanced mood.American Ginseng is an herb used for various medicinal purposes, which range from oxidative stress to diabetes. Although for many of its presumed benefits scientific evidence is still needed, American Ginseng enjoys a great popularity as an herbal medicine. There is evidence which indicates it may improve energy, memory and mental focus. Other health benefits include sleep disorders symptoms, fibromyalgia symptoms, anemia, high blood pressure, infections or fever. Similarly, it is believed that a combination of American Ginseng and Ginkgo Biloba may be effective in reducing ADHD disorder symptoms.Although considered safe for use on the short term, American Ginseng use may lead to anxiety, low blood sugar, vomiting and insomnia.

Panax Ginseng (Korean Ginseng) is known for a wide spectrum of other benefits. It has potent adaptogenic properties; hence it is commonly used in stress management and to support how the body naturally copes with stress. Panax Ginseng has been also successfully used by athletes to enhance physical endurance duringtraining The herb is also believed to have antioxidant properties. Several clinical tests have shown it may be able to improve focus, concentration, speed of recall, memory and accuracy, however solid scientific evidence to support this claim is still required. Side effects of Panax Ginseng are rare but may include changes in heart rhythm, drowsiness, anxiety, sadness and muscle spasms.

2) What Are Clear Boost Ingredients?

Eleuthero or Siberian Ginseng has demonstrated strong antioxidant and adaptogenic properties, which account for its many benefits. Eleuthero has been investigated as a potential treatment for anxiety disorders such as panic attacks or social anxiety. Additionally, research seems to indicate the herb may have a beneficial effect on environmental and psychological stress and on improving endurance and reducing fatigue. Eleuthero use may sometimes cause sadness, anxiety, drowsiness, changes in heart rhythm, or muscle spasms.

Ginkgo Biloba, one of the most traditional herbal extracts used in alternative medicine treatments today, has a large number of health benefits, some of which are extensively researched. The herb is useful in stress management, as well as in alleviating symptoms of depression and mood swings. The plant has potent antioxidant properties, being able to fight oxidative stress and its harmful side effects. This is why Ginkgo has been researched for potential benefits against stroke, Alzheimer’s disease or Parkinson’s disease. Due to its blood flow enhancing properties, Ginkgo may help with conditions such as Tinnitus, neuropathic pain disorders or Reynaud’s disease. Certain side effects are associated with Ginkgo, although the numerous research studies have proven it is well tolerated.
Also, Ginkgo may interfere with blood thinning medication, hence should be consumed with caution by particular categories of patients.
The formula received only a limited number of consumer testimonials, all of which are available on a distributor’s website. They should be treated with caution since they may be used as a marketing tool rather than to evaluate the formula’s actual Effectiveness.

5) What You Need to Know Before Taking Clear Boost

Clear Boost is a rather expensive supplement. A package of 34 packets (servings) which last 34 days costs as much as $55. There are certain discounts offered by the manufacturer for Proffered Customers or Distributors. The product can be purchased from a variety of distributor websites, as well as from the manufacturer website.

There are no consumer reviews available for Clear Boost, other than a few on the manufacturer’s website, which should be treated with caution. The manufacturer specifically mentions Clear Boost is a side effects free formulation. The recommended dosage is one packet mixed with 4 fl. oz. or more of any liquid or shake.

Herbal products and alternative medicine remedies have gained increasing popularity over the past few decades. There are reports that almost 20% of the U.S. population is frequently turning to herbal medicine to treat common illnesses. However, the fact that the FDA does not regulate the production of herbal supplements and hence no clear regulation or standardization exists, leads to safety and other concerns that may temper the decision to use these products. It is hence always advised that you consult a healthcare provider before using such products.

Clear Boost is a mixture of herbs which promises to deliver increased stamina and focus in a safe and side-effect free manner. However, there is no evidence to support this claim, nor are there consumer reviews. The individual use of the ingredients has been sometimes associated to certain side effects which are not to be ignored. Still, the formula may be effective for some patients, since many of the ingredients have been linked to benefits similar to those advertised by the formula.

Not to mention, we love that they offer ALL BrainReference access to a free sample for a limited time. 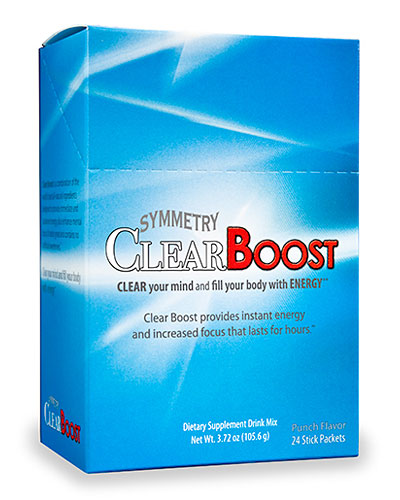 clear
Q:
What does Clear Boost contain?
A:

Clear Boost is an herbal supplement advertised to support healthy energy and mood and to enhance focus capacity. The formula is manufactured Symmetry, which claims Clear Boost produces immediate, long lasting, side effects free benefits. The formula contains Ginkgo Biloba, an herbal extract known to be effective against depression, stress, memory loss symptoms, Alzheimer's disease, tinnitus and other ailments. The Siberian Ginseng, Korean Ginseng and American Ginseng extracts are known for their adaptogenic, antioxidant properties which make them effective in managing anxiety disorders, stress symptoms and enhancing energy. There are certain side effects associated to Clear Boost ingredients.

Clear Boost is marketed as an herbal, natural, side effects free supplements for energy, focus and mood enhancement. However, there is no evidence brought by the manufacturer to support its benefits claims. Also, the lack of consumer reviews makes it even harder to evaluate the formula's actual effectiveness. The ingredients are popular herbal extracts associated and commonly marketed to possess benefits that could contribute to the formula's effectiveness. There are also certain side effects associated to some of the ingredients; this is why we recommend caution and as much as possible to consult a healthcare practitioner before use.

Awesome product! Whenever I need a boost or some clear thinking I take it and it really makes a difference. It puts me in a mood that anyone can definitely be around me. Love it!!!