Carlson Mellow Mood is advertised as a multi-nutrient formulation which assists with healthy mood, promotes mental clarity and a sense of calmness. The manufacturing company, Carlson Laboratories, does not specifically disclose the main ailment claims. In fact, very little information is offered by the manufacturer. However, extensive research has been conducted and is available for study on the formula’s main ingredients (L-Theanine, GABA, and B Complex Vitamins) which may help the reader get an understanding of the formula’s spectrum of benefits.

Carlson Laboratories is an U.S. based company founded in 1965 by the Carlson Family. The company enjoys a vast expertise in the dietary supplements market and has received numerous awards for its products, including one for its Norwegian fish oil line.

Carlson Mellow Mood is designed for adult use. Pregnant and nursing women are advised not to use mood regulating supplements.

Carlson Mellow Mood is a blend of amino-acids and vitamins. The core ingredients of the formula are the B Vitamins, GABA and L-theanine Suntheanine, each extensively researched and proven effective in promoting brain relaxation.

L-theanine, a non-essential amino acid, is primarily found in the leaves of the plant Camellia sinensis, used to produce teas (particularly black, oolong and green tea). Suntheanine is the synthetic form of L-theanine, found in dietary supplements. Preliminary research results indicate Suntheanine is able to reduce stress symptoms, while also maintaining an alertness state and avoiding drowsiness. It apparently works by reducing heart rate and promotes alpha brain waves, which indicate the presence of alert relaxation. Although an exact dosage has not yet been established, it appears that 50 to 200 mg of L-theanine may produce the wanted relaxation effect.

Several animal studies indicate that L-Theanine increases production of Dopamine, a neurotransmitter Dopamine has been shown to increase focus and attention and promote a general state of well-being. It may be effective in treating ADHD, ADD, depression and even Parkinson’s disease, as patients with Parkinson’s lose most of their dopamine producing nerve cells.

Carlson Mellow Mood received a limited number of consumer reviews; however they are positive and report the formula is effective. Drowsiness is mentioned as a side effect. The manufacturer recommends taking 1 capsule 1-3 times a day.

Carlson Mellow Mood promises to balance mood and offer a relaxed, calm mind. The formula features ingredients such as GABA, B Vitamins and L-theanine, commonly used by similar products. The formula is very likely to accomplish its purpose, given that scientific research on its individual ingredients confirm their brain calming properties. There are however concerns over the effects of the formula on pregnant and nursing women, who are advised to consult a healthcare provider prior to use. We stand by the manufacturer’s recommendation and advise all patients considering taking dietary supplements to get specialized advice prior to use. 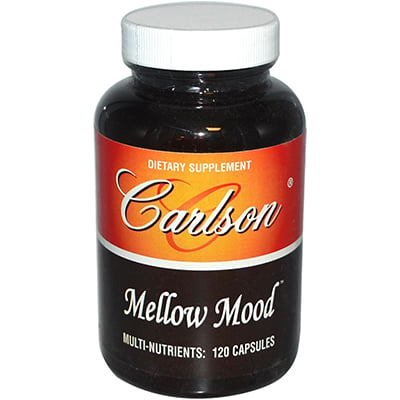