Carlson Norwegian Cod Liver Oil is claimed to be periodically tested for purity, freshness and potency tested by an independent, FDA-registered laboratory. The manufacturer however fails to specify further details about the laboratory.

Carlson Laboratories was founded in 1965 in the United States. The company has achieved extensive expertise in the dietary supplements market and has received numerous distinctions for its high quality products. Its current product portfolio includes herbals, vitamins and minerals, fish oils, enzymes, amino-acids, antioxidants and condition targeted formulas.

Omega-3 fatty acids are considered essential fatty acids because they have to be obtained from food or supplementation, as the body is not able to produce them. They have been the topic of numerous research studies and clinical trials over the past decades. The investigated benefits include a wide spectrum of medicinal applications, from forms of cancer to diabetes, from Alzheimer’s disease to ADHD (Attention Deficit Hyperactivity Disorder), from high cholesterol, to macular degeneration. Additionally, there is evidence that Omega-3 is essential to fetal brain development, cognitive function and neuro-protection. DHA represents a large portion of the fatty acids found in the brain and retina, accounting for up to 97% of the Omega-3 fats in the brain and up to 93% of the Omega-3 fats in the retina.

Although an exact dose is not established, scientists seem to agree that a 1200-1300 mg dosage of combined EPA and DHA should be consumed daily. Consumer reviews generally positive and seem to confirm Carlson Norwegian Cod Liver Oil’s advertised benefits. No side effects are mentioned for the formula, although Omega-3 may interfere with blood thinning medication and potentially increase the risk of bleeding.

Carlson Norwegian Cod Liver Oil is based on the properties of Omega-3. The formula is designed to support essential bodily functions, and consumers seem to agree that the formula delivers on the advertised benefits. The large number of consumer reviews is a proof that the manufacturer is popular and that the product enjoys a good reputation as well. Carlson Cod Liver can definitely benefit certain categories of patients. However Omega-3 may under certain circumstances interfere with blood’s ability to clot, this is why we recommend caution.

I give this to my kids in the morning in their orange juice, and i haven’t heard them complain of the taste yet. Unlike with many other fish oil supplements. Great stuff

I trust Carlson Laboratories with almost all my supplement choices. This liquid code liver oil is great taste and great value for money. 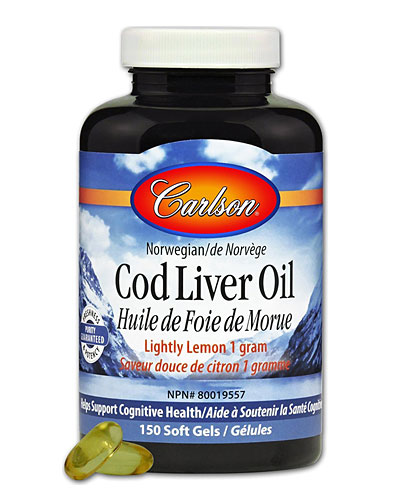