CalmTrex is presented as a cutting-edge nutritional formula that may be effective in assisting with common symptoms of depression, and anxiety, lowering stress, enhancing attention span and concentration skills, and generally improving cognitive function. This is one of the numerous products offered by the American manufacturer Stop Aging Now. Because they have been present on the healthcare products market for almost 2 decades, they have a very good reputation among consumers. They sell their nutritional supplements internationally through direct marketing, through retailers, or by direct distribution in healthcare stores and pharmacies.

CalmTrex is sold as a natural supplement that features 100% Zembrin, a patented extract of the Sceletium tortuosum plant, a natural anxyolitic and sedative remedy. This standardized compound is the most researched extract of this herb and was clinically shown to promote balanced mood, reduce anxiety, and improve alertness in the subjects involved.
The formula features two more active substances to potentiate the cognitive and mood balancing benefits. These are Vitamin B12 and lemon balm extract.

CalmTrex is addressed strictly to adults who are not currently under any other medication. The formula’s high quality is also guaranteed by the fact that it is processed in an DFA inspected facility to meet the rigorous USP standards.

This nutritional supplement is based on a relatively low number of active compounds.
The main nutrient is Zembrin, a patented extract of the herb Sceletium Tortuosum, researched for its believed benefits on the nervous system and brain. This is advertised as a unique, rapidly acting botanical extract developed over 10 years ago and clinically researched ever since. The main benefits supported by scientific evidence are those on the cognitive flexibility and executive function. Researchers all over the world agreed upon the plant’s calming effects that are also non-habit forming and very well tolerated. More so, the plant has been used as a traditional remedy against depression and stress for hundreds of years, so its therapeutic effects are also empirically demonstrated.

Another active compound with mood balancing and cognitive benefits is the well-known Vitamin B12, included here in its most bio-available form, as Methylcobalamin. This nutrient has been shown to participate in numerous bodily processes that benefit different areas of the human body, the most important being the cardiovascular and the nervous systems. The connection between reduced levels of vitamin B12 and mood changes including anxiety and depression symptoms, and physical and mental fatigue has been observed in numerous clinical trials conducted so far. Side effects may include nausea, itching, blood clotting, or allergic reactions, particularly when very high amounts are ingested.

The suggested dose for CalmTrex is 1 vegetable capsule per day with a meal, or as directed.
CalmTrex testimonials are available for online consulting both on the manufacturer’s site, and as well on the web pages of other retailers.

CalmTrex formula is a trademarked form of Zembrin offered by Stop Aging Now and is marketed as a potent natural antidepressant suitable for those who seek a safer alternative to traditional medication.

The formula’s effectiveness is owed to the active compound shown in clinical trials to assist in the synthesis of an important neurotransmitter related to mood and behavior, called Serotonin. The effectiveness of this compound is however supported by a limited number and relatively reduced in size clinical trials. But still, this is an increasingly more popular nutrient which has gained a good reputation mostly because the plant has been used for decades for its soothing effects and has shown to be effective in reducing stress-related disorders.

The formula itself is not clinically tested, but there is a sufficiently large number of testimonials to help you get an idea about its potential side effects and actual benefits. Those who consider purchasing such a product are advised to consult a healthcare practitioner and make sure that it suits their individual needs.

The main issue with synthetic ingredients is that you don’t always get what you pay for. In reality, synthetic ingredients are well known for their low absorption, poor bioavailability, and the fact that they drain the body’s reserves of other minerals and vitamins (e.g., cofactors) required for proper absorption of other nutrients.
read more
At BrainReference we recognize that dietary supplements can be the source of many allergic responses either due to cross-contamination with high-allergen compounds during the manufacturing process or because they incorporate ingredients obtained from high-risk allergenic foods (milk, eggs, or fish).
read more
Companies with less integrity will use dangerous fillers as a “grease or lube” to aid in easier and faster production. Artificial dyes and colors are used to make supplements more appealing to the eye. Coatings are added to make capsules easier to swallow. How do these fillers impact your body and health?
read more
Independent testing labs are not associated with the producing company, ingredients supplier, the company whose name appears on the product, or with the consumer. This means independent testing labs have no vested interest in the result of the testing and are less likely to “dry lab” or manipulate test results for self-serving reasons.
read more
Product rating (4.5 / 2)

I’ve only been taking it for 4 days and I feel great! I sleep great and have a sharper mind.

Are all the ingredients non-stop or organic? I am allergic to corn….and anything they make with corn. Thank you for taking time to answer.my question.

CalmTrex ingredients are not organic, and it contains milk (Ashwagandha is prepared following Ayurvedic tradition resulting in trace quantities of milk remaining in the product). However, it doesn’t contain any of the more common allergens like egg, fish, shellfish, tree nuts, wheat, soy, and peanuts.

How do I order Calm Trex, I have used it, and can not find a place to get replacements, would you please help me out.

CalmTrex is one of the best natural antidepressants I have tried. After quitting prescription drugs (due to the numerous side effects I was experiencing) I tried different brands of herbal remedies and dietary supplements to alleviate my depression. And I stopped to this one because it is very effective in a small period of time. If I miss my daily dose I immediately feel sad and get annoyed very fast. CalmTrex has helped me to become a better person!

I like this herbal remedy because it works very fast and help me be less aggressive and feel happier. I have also noticed an improvement in my sleeping patterns lately. 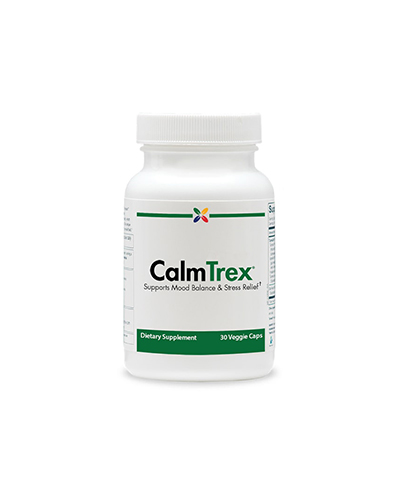 CalmTrex or HCF?
Click Here to Find Out Menu wpDiscuz