Brain Toniq is marketed as the world’s first organic, kosher, botanical-based, caffeine free think tonic designed to enhance mental focus and clarity. The formula comes in the form of a functional drink and is free of chemical preservatives, white sugar or artificial colorings. The manufacturer claims that the formula contains a unique combination of different ingredients, all having various effects on cognitive function. While some work to increase oxygen levels in the brain, others stimulate neurotransmitter growth.

The product is designed for adults and teenagers who need a clear, focused mind in order to complete their daily tasks or cope with more challenging periods.

TrueToniqs is the manufacturing company of this supplement. The company currently produces and markets two products who enjoy a great popularity: Brain Toniq and Trim Toniq, functional drinks designed to aid with brain and cognitive function improvement and weight loss.

Brain Toniq is a functional drink based on a blend of botanic ingredients. According to the manufacturer, the product is the first tonic specifically designed to enhance more mental focus and clarity. The drink combines three powerful nootropic plant extracts, Rhodiola root, Eleuthero and Blue Green Algae, as well as two organic compounds, Choline and DMAE.

Rhodiola is a plant with powerful adaptogenic properties. Several studies have shown Rhodiola improves mental performance during stressful, demanding periods. It has been used in traditional medicine for centuries to enhance physical and mental performance (especially in Russia and Scandinavian countries) and today is commonly found in formulas promoting boost in energy, stamina and strength (athletic performance enhancers for instance), anti-anxiety and anti-depression remedies and mental capacity enhancing formulas (such as memory and learning).

Eleuthero or Siberian Ginseng is also most known for its adaptogenic properties. It has also been shown to help with adrenal fatigue, improve oxygenation to the brain, boost stamina and improve memory and learning.

3) What Does Brain Toniq Do?

Promoted as a deeply researched and natural energy drink which doesn’t contain caffeine, Focus & Memory Drink is designed to improve energy levels to obtain better focus and concentration. It is a product recommended for people who have busy schedules and require an energy boost during the day. This remedy is composed of a series of natural ingredients with individual known properties.

Among these ingredients there is DMAE. Also known as Dimethylaminoethanol, it is an antioxidant with a structure similar to choline. Within its properties, the most important are: boosting the levels of chemical messengers such as acetylcholine and choline (two neurotransmitters that support cognitive function and conducting nerve impulses in the brain), while the phosphatidylcholine (obtained by conversion from choline) protect cell membranes. Thus, DMAE promotes energy production and may help with faster muscle recovery. Potential side effects are insomnia, headaches, and muscle tension.

Another compound of this dietary supplement is Rhodiola Rosea Extract, a herb from the Arctic regions of Siberia. Russians have been using this herb as a supplementation in a drinking form for centuries for its energy boosting properties. It has a reputation in stimulating work performance, the nervous system and fighting depression while reducing sickness. Generally categorized as an adaptogen, it can improve resistance to various biological, chemical and physical stressors. Unfortunately, there are some side effects related to consumption of Rhodiola based supplements, including dizziness, dry mouth, and anxiety.

There are no online testimonials about Focus & Memory Drink.

4) What Brain Toniq Does?

6) How Much Does Brain Toniq Cost?

Usually sold by packs of 24 cans, Focus & Memory Drink is viewed as an affordable product, especially in comparison with other caffeine-based energizers. It can be bought either from manufacturer website or other online or offline retailers, and some of them might even offer discounts and promotions.

Online testimonials are extremely positive, with consumers reporting increased effectiveness and the product delivering on its promise. The recommended dose is 1 to 2 cans a day.

8) Our Verdict on Brain Toniq

Brain Toniq is a revolutionary product of the functional drinks category, one of the first botanical-based caffeine free, organic “think drink” on the market. The drink blends 3 important plant extracts and 2 organic compounds, all demonstrated to positively impact cognitive performance one way or another.

Consumer reviews are extremely positive, reporting excellent taste, very high effectiveness and practically no side effects. A downside commonly mentioned is the rather high price of the formula, however many consumers agree that the price is worth it.Given that the ingredients may potentially cause side effects, it is best you seek the advice of a healthcare provider before starting use.

New manufacturing technologies play a key role, and there’s little doubt it will soon bleed into the brain supplementation market, and, for some, it already has.
Featured

HCF® Happy, Calm & Focused is among the best Amino Acids [Blend] we've reviewed in years, and there's no doubt HCF can offer more in terms of supporting calm and focus than any other product we've encountered.

Plus, it’s incredible that BrainReference visitors have access to a free sample of HCF® Happy, Calm & Focused today! 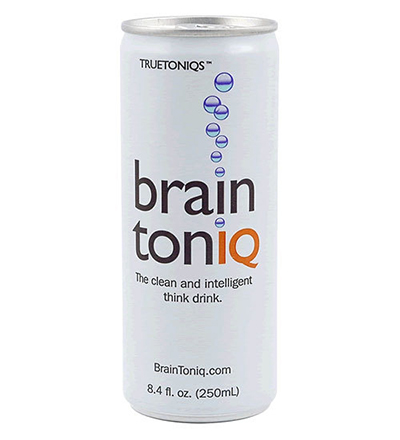 clear
Q:
What are the Brain Toniq ingredients?
A:

Brain Toniq is advertised to be a liquid supplement that aims to help with mental focus and clarity. The company that manufactures this product is called Truetoniqs and is located in Colorado, United States. Brain Toniq claims to be a natural blend of ingredients such as Choline, an essential brain nutrient that aims to prevent learning and memory disorders; Blue Green Algae which aids with mood and offers stress relief, and Rhodiola Rosea Extract that supports the energy levels needed in order to prevent attention disorders.

Promoted as an energy drink based on natural ingredients, Focus & Memory Drink is viewed as a natural replacer of caffeine-based energizers. Manufacturers claim to have researched for more than two years until they came up with this project. However, due to the combination of existent compounds, some side effects may occur after its consumption and people should immediately stop drinking them. This product should be regarded as a prompt energy booster that doesn't replace a proper diet and shouldn't be taken more than three cans per day.

I only use all natural supplements and I can say that I’m quite satisfied with this one.

Every time I have exams I have this near by, the clarity and attention it gives me is incredible.