Brain Fit formula is a Nootropic supplement advertised to increase overall wellbeing by supporting mental clarity, brain function, and emotional balance. The company behind this supplement is called 50-Fit, but we couldn’t find an official site or information about its activity or other products.

Besides the huge problem with not having an official web-site, the formula’s list of ingredients is very similar to at least 5 supplements reviewed on this site lately. Who knows how many such products are sold under different names? Although we’re not sure which product was copied after the other, we must say the lack of originality and scientific proof of the claimed benefits is very disappointing. To us it looks this is just one of the many manufacturers of dietary supplements who’s in just for the profit.

This being said, we’ll analyze the ingredients of Brain Fit in the sections below to see if they are clinically tested and what are their benefits in the cognitive area, the associated side-effects, and the science behind their claimed properties.

Several herbal extracts have been included in the formula for the purpose of supporting memory function, protecting the brain, and restoring and maintaining emotional balance. These herbs are very popular remedies used for centuries in traditional medicine for purposes not necessarily related to the brain’s activity. However, as the science evolved, they were discovered to possess important antioxidant or antidepressive properties which made them excellent candidates for supporting healthy brain functions.

Ginkgo Biloba, for example is advertised as one of the most potent natural antioxidants of herbal origin. It is why it is a worldwide recommended supplement against age related memory impairment. Its abilities to improve blood flow and prevent platelet aggregation make it a popular remedy for circulatory system problems.

Vinpocetine also acts as a powerful antioxidant with neuroprotective qualities. The plant extract facilitates synthesis of essential chemicals for the brain called neurotransmitters. Dopamine, Norepinephrine, Acetylcholine, or Serotonin production are all stimulated by Vinpocetine, each of these substances playing key roles in certain areas. For example, Acetylcholine is involved in neural communication. Without adequate concentrations of this neurotransmitter we experience memory lapses, retention problems, or poor thinking. Serotonin is also called the “mood neurotransmitter” because it regulates mood, and sleep-awake cycles. Serotonin deficiency has been associated with depression and anxiety symptoms, and sleeping and weight problems.

Huperzine A is also a cognitive enhancer. It was shown to act as an acetylcholinesterase (AChE) inhibitor, meaning it can delay Acetylcholine absorption. As said before AC helps maintain optimal concentration, learning, and memory. Huperzine A has also the ability to fight against oxidative stress, due to its antioxidant properties.

St John’s Wort is a very popular natural antidepressant recommended by doctors as an alternative with fewer side effects than prescription medication. So far the results of scientific trials support the plant’s effectiveness, but research is far from being over.

Ginkgo Biloba is one of the most popular ingredients found in this formula. The extract has been used in various concentrations in modern medicine particularly to support memory and normal circulatory system function.

In this supplement, the extract is standardized to 24% Ginkgo Flavone Glycosides. Glycosides are the compounds that give Ginkgo’s powerful antioxidant qualities, the one which make it so effective in preventing brain damage, circulatory system and heart disorders.

Phosphatidylserine, another well-known ingredient of brain boosting supplements, is a herbal extract (usually from soy or cabbage) included for its neuroprotective qualities. The compound is naturally found in high quantities in cell membranes where it allows nutrients to enter and the waste to be eliminated out of the cell. Because PS levels decrease as we age, researchers have searched for a way to replenish this nutrient and prevent the problems caused by a PS deficit. Among the listed benefits are the maintenance of memory and other cognitive abilities, and prevention of illness like dementia including Alzheimer’s disease.

St John’s Wort is one of the most popular natural antidepressants, recommend as a safer alternative to prescription medication. It has been shown that when used as a line of treatment instead of SSRIs or tricyclic antidepressants in patients suffering from anxiety, depression, or mood swings it causes fewer side effects.

Acetyl-L-Carnitine, a compound derived from the amino-acid Carnitine, is also a common ingredient in dietary supplements designed to improve brain function and energy levels. The chemical is currently prescribed to treat age-related oxidative stress, decrease mortality in cardiac patients, and improve exercise performance in individuals with peripheral arterial disease.

5) What You Need to Know Before Taking Brain Fit

6) How Much Does Brain Fit Cost?

Brain Fit is available for purchase at various online retailers. The standard price for a month’s supply is around $20, but the item is currently unavailable at some online stores. We advise potential buyers to carefully read the shipping policy of each online store, as taxes may vary widely.

And the last herbal extract in this formula Bacopa Monnieri is also researched for its brain boosting and anti-anxiety benefits.

8) Our Final Take On Brain Fit

Brain Fit is promoted as a Nootropic but lacks the originality. At this time there are at least five or six other nutraceuticals with the same list of ingredients. We cannot find any reason why a certain manufacturer would use identical ingredients besides the obvious reason of not investing any money in research and development.

Still, the formula looks safe and most consumers are satisfied with the results. However, it’s important to be aware of the potential unwanted side effects that can be associated with the use of some of the ingredients in the formula. For example Ginkgo Biloba may increase the risk of bleeding, and St John’s Wort can cause photo-sensitivity as well as interact with various chemicals from other medication. The other ingredients can also cause specific side effects, so it you experience any kind of problem, please inform your doctor and discontinue use immediately.

Whole-body health and wellness start with the brain, but maintaining proper cognitive health requires a lot of things such as smart food choices and exercise. Choosing the right product to help you stay calm and focused is of vital importance too.
Featured

To give everyone the posibility to try HCF® Happy, Calm & Focused, HCF AminoScience offers a free sample to all BrainReference readers. 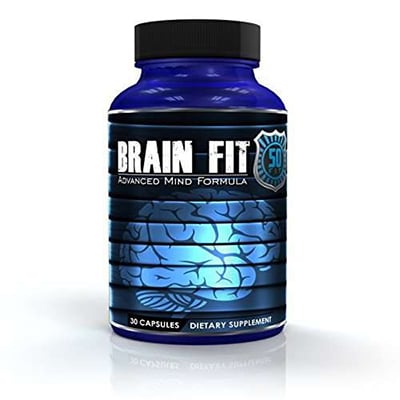 clear
Q:
What does Brain Fit contain?
A:

Q:
What is Brain Fit supplement?
A:

Brain Fit is a nutraceutical sold as a brain boosting formulation. The product is manufactured by 50-Fit, a company of which we couldn't find any information at this time. This supplement is based on a blend of various chemicals, most of which are popular herbal extracts commonly used in brain supplements. These herbs are: Ginkgo Biloba, St. John's Wort, Bacopa Monnieri, Vinpocetine, and Huperzine A. All these ingredients have been researched for potency in the brain related field. Some of them have proven to be powerful antioxidants (like Ginkgo Biloba and Huperzine A) that can successfully support memory, attention, and learning. Others showed important benefits in supporting synthesis of neurotransmitters like Dopamine and Acetylcholine, both related to memory, attention, or concentration, among many other benefits. St John's Wort was shown to act as a potent antidepressant, which makes it a preferred alternative to prescription drugs usually associated with more severe side effects. Brain Fit also includes ingredients like Phosphatidylserine, Glutamine, and Acetyl-Carnitine, which have also been researched for their abilities to improve brain function under various aspects.

Brain Fit is a blend of nutrients clinically studied for their potential benefits in the cognitive area in humans. However, the main problem with this formula is that we've seen it before and there's no proof of it being a clinically proven effective product. Although numerous producers have copied the same recipe, none of them can demonstrate its effectiveness in promoting increased mental performance or reducing stress levels. Consumer reviews are limited at this time, but tend to support Brain Fit's ability to promote better focus, increased sharpness, and a calmer state.