Relying on a plant with an enhanced nutritional tradition, Botanic Choice Korean Ginseng is presented as a natural product whose beneficial effects are related to the improvement of strength, wisdom, and longevity, as its producer states. The business that created and is currently offering this product on a national scale is named Botanic Choice.

Even though it was harsh for him at first, Joseph Meyer finally managed to see his dream become reality and founded this company with a lot of support from his family and hard work in the year 1910. From its beginning, they specialized on utilization of herbal properties in order to better the lives of individuals, particularly those who suffer from certain bodily issues. After its establisher passed away, the company was taken over by his grandson and his great-grandson who constantly improve the manufacturing processes, customer satisfaction and the quality of their products.

This supplement contains a well-known component on the natural market, Korean Ginseng which was standardized to feature five percent ginsenosides, meaning that the quality and bioavailability of the remedy is within proper parameters. Botanic Choice Korean Ginseng is mainly suggested for individuals who suffer from too high stress levels or just want to improve their lives with the help of alternative supplements.

Advertised as a natural supplement whose main purposes are to combat stress, while also enhancing mental alertness and maintaining cardiovascular health, Botanic Choice Korean Ginseng relies on a single herbal extract, but seeks to reach all these features due to its composition. Research revealed that this plant has been utilized for thousands of years for the enhancement of the body, particularly linked to alleviating symptoms of, inflammations, cardiovascular issues, or even some nervous problems, although the latter usage hasn’t been fully explored.

Panax ginseng is available in a wide variety of forms, but within the most common there is nutritional supplementation. It was included in Ayurvedic medicine and the Chinese thought that, as the majority of herbs, it has a unique set of qualities. The main utilization of this ingredient is related to conditions like asthma, cancer, depression, and anxiety. From these, the influence on anxiety was the one that has been more studied.

Moreover, it possesses a positive impact on mood improvement as well as increase of athletic performances. On the other hand, the National Institutes of Health claims that the information existing in this matter is currently limited and there may be no improvement whatsoever in conditions such as depression, fibromyalgia, and anemia.

Botanic Choice Korean Ginseng is overall promoted a natural remedy whose positive effects rely on a single ingredient and should enhance immunity, cardiovascular system, and help treat some medical conditions such as anxiety, chronic fatigue symptom, and depression. Moreover, it may also improve alertness and physical condition. The safety of long-term use of this supplement is currently unknown, and there are some possible side effects which may occur during its consumption, particularly if the people aren’t careful enough with the utilized dosages. All in all, it may be viewed as a reliable product for modern people that have stressful jobs or lack energy on a daily basis. 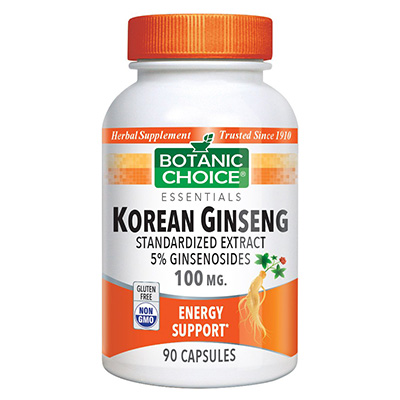