Bolt Formula 260 is a caffeinated supplement which can enhance mental alertness, energy, and productivity. It’s distributed by New Jersey company DNE Nutraceuticals. They’re more of a manufacturer than a seller, owning a cGMP and NSF certified facility in Monmouth County. They work with companies in the United States and abroad to create a wide variety of supplements. They deal with products for bodybuilding, weight loss, energy boosts, and multivitamins. The company appears to have a strong commitment to quality, and they claim to capable of manufacturing over 2000 supplements.

Each capsule of Bolt Formula 260 contains 130 mg of a proprietary blend that’s mostly caffeine. It contains some ingredients to help ensure the structural integrity of the tablets and NADH. NADH (from Nicotinamide adenine dinucleotide) works on the cellular level to provide energy to cells and much more. It has essential roles in metabolism and extracellular processes. A fair number of studies have investigated the potential benefits of NADH besides simply boosting energy for cells, but not enough has been done to figure everything out. NADH has a large number of potential benefits with insufficient evidence.

2) What Are Bolt Formula 260 Ingredients?

This supplement’s main ingredient is caffeine. It notably includes NADH along with the caffeine. NADH stands for Nicotinamide Adenine Dinucleotide Hydrogen, a reduced form of NAD. It’s a coenzyme which your body can synthesize from amino acids and generate energy. It has essential roles in metabolism and extracellular processes. It’s often included in research into treatment for diseases, combined with other compounds. One experiment found that mice had improved nuclear-mitochrondrial communication after being given NAD. NADH has the potential to be used in future as anti-cancer, anti-viral, or immunosuppressive drugs. Currently it’s used for a wide variety of things, although there isn’t much solid evidence for any specific benefits. So far NADH appears best when used short term, taking 10 mg a day for up to 12 weeks. Most people aren’t deficient because common foods contain NADH.

Some people believe NADH is responsible for helping with memory, immune system function, DNA repair, concentration, anti-aging, and athletic performance. The scientific evidence is unclear on these claims. When combined with other medications or supplements, NADH may reduce the symptoms of chronic fatigue syndrome (CFS), but again there is insufficient evidence to truly back this up. NADH works well with vitamin B3 (Niacin) and it’s recommended that adults should get 13 to 20 mg a day of B3.

Each bottle comes with the strange number of 96 tablets. The label recommends taking two at a time, and each bottle will last at least a month. Bolt Formula is a lot less expensive than coffee, but the price is slightly above average for a supplement. As always, the price really depends on how often you plan to take the product. More frequent use can make it expensive. Occasional use can make Bolt Formula inexpensive. For example, if it takes you 2 or 3 months to finish one bottle, then this is a terrific deal.

Caffeine, on the other hand, is one of the most popular substances around. About 83 percent of adults in the United States drink coffee, averaging two to three cups a day. Coffee (and caffeine) fuels a massive amount of people and won’t go away anytime soon. But coffee just doesn’t strike a chord with some people, which led to the invention of energy drinks. An alternative source of caffeine to rejuvenate people in their daily life and keep energy levels high. Drinks, however, can get expensive in the long run. People spend hundreds of dollars on caffeine, and people who want yet another alternative have turned to tablets. Pure caffeine without any strange additives or unnecessary sugar. Bolt Formula 260 aims for that category – to give you another choice.

Bolt Formula 260 is the only product sold by DNE Nutraceuticals. Considering their capabilities, this must mean they have a lot of faith in this product, as they’re a manufacturer and not really a distributor. Although they may lack outreach and consumer-related marketing strategies, this is probably a good caffeine supplement. If you find yourself tired, full of brain fog, and lacking motivation, this could be an option for you. At the very least, if coffee isn’t quite doing it for you anymore, tablets of caffeine and NADH might do the trick.

Bolt Formula 260 has brain benefits, but there may be more appropriate options for your particular concerns.
Featured

Our chosen focus and attention supplement in 2020 is HCF® Happy, Calm & Focused. There's nothing generic about this brain supplement. Uniquely formulated and using only clinically proven ingredients, HCF works to make your journey towards brain health one you can stick with for the long term. 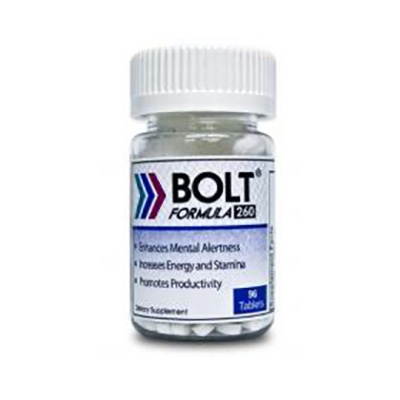 DNE Nutraceuticals says one serving of Bolt Formula 260 should give you enough energy to keep you going for 6 to 8 hours. If you have a high tolerance for caffeine, you may need more than 2 tablets a day. Regular consumers of coffee or energy drinks are the most likely to resist caffeine's effects. While the price isn't the best for Bolt Formula, it's dirt cheap if you're replacing your daily coffees with this supplement, and this may be more effective too.