Is Bio-Directed Mental Clarity Right For You?

Bio-Directed Mental Clarity is advertised as a “unique multi-action formula that combines the most advanced nutrients and antioxidants to improve brain circulation and metabolism.” Nikken is the company that manufactures this product.

This supplement is promoted as a powerful product that can help consumers achieve a balanced state of mind and a healthy body.

The product contains Cordyceps Synensis, one of traditional Chinese Medicines’ most useful medicinal tools. Unfortunately, this plant is unfamiliar to most American consumers.

While Bio-Directed Mental Clarity does not come with a free trial sample, the company does offer a 30-day refund policy that can be obtained by contacting the manufacturer via their official website. The shipping fees will not be returned.

As we have stated above, Bio-Directed Mental Clarity contains Cordyceps Synensis, one of traditional Chinese Medicines’ most important medicinal tools. Cordyceps Synensis is the dried fungus growing on the larva of the caterpillar. This ingredient is extremely popular in China, where it is used as a general health tonic. It is believed that this fungus has a broad range of biological and pharmacological actions on the kidneys, liver, heart and immune system.

Another key ingredient, Alpha Lipoic Acid is described by the manufacturer as a “redox-active molecule capable of thiol-disulfide exchange.” In translation, Alpha Lipoic Acid acts as an effective antioxidant. Several studies conducted on rat aging have suggested that the use of Lipoic Acid and L-carnitine results in improved memory performance and therefore could prove to be an integral part of treatment for people with Alzheimer’s disease or Parkinson’s disease. Unfortunately, the effects of these substances are still under research, and it may take a while until we can state for certain if Lipoic Acid is useful in treating Alzheimer’s and Parkinson’s symptoms.

Many of these ingredients have been promoted in various other products on the market that are offered for enhanced brain power. However, there is little information to provide answers about how they work. We were unable to find such information on the manufacturer’s website, so, from our point of view, some of the company’s claims cannot be sustained at this moment.

A bottle of this product contains 60 capsules, which should be enough for one month of treatment at the recommended daily dose of 2 capsules. The price of Bio-Directed Mental Clarity may vary from one retailer to another. This product is available for purchase from both online and offline retailers.

Consumers seeking a gentle, effective and safe way to boost their moods and support their memory and mental acuity should consider the effective supplements available that are both mild and free of side effects. It is also important to seek products that have been fully researched and that are accompanied by a free trial sample and some positive testimonials and reviews. The Nikken website post several testimonials, but not for this particular supplement.

The product contains vitamin C, which is a good thing. However, it also contains several less researched ingredients such as Cordyceps Synensis. We are also worried by the lack of information regarding how this particular formula is supposed to work.

Manufactured by Nikken, Bio-Directed Mental Clarity is a supplement that is based on nutrients supposed to benefit the brain circulation and the detoxification of the organism. It is thus recommended to those who deal with aging related problems, such as memory loss or loss of concentration. Bio-Directed Mental Clarity includes Chinese nutrients, being uniquely created for the blood flow to significantly be improved after using this supplement. 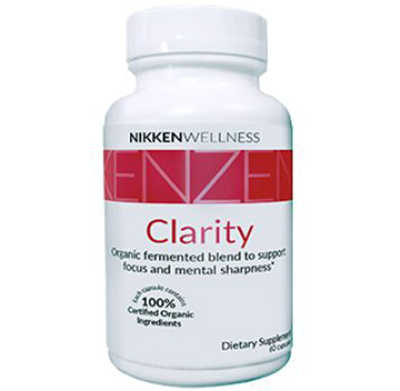