Apple Cider Vinegar is a dietary supplement available in the form of capsules and based on the health enhancing benefits of apple cider vinegar. The formula is manufactured and distributed by Alfa Vitamins Laboratories is claimed to be a broad spectrum benefits natural remedy. Apple Cider Vinegar is claimed to support the health of the digestive system and prevent intestine infestation with pathogenic bacteria that might cause swelling or poor digestion, to enhance circulatory system function, to support the health of the eyes and skin, and to exert antioxidant properties.

With a network of more than 1600 retail outlets, supermarkets and pharmacies included in its distribution chain and an export activity that targets 51 international markets, Alfa Vitamins Laboratories is a reputable manufacturer and distributor of dietary supplements. Headquartered in the United States, the company established in 1994 has a production capacity of 250.000 bottles per day with the help of 5 production lines. The company is also a member of the Natural Products Association established in the United States and claims to operate under the rules and regulations established by the FDA, the Department of Agriculture, and the United States Pharmacopoeia (USP). .

Apple Cider Vinegar is recommended to be used by adults exclusively and contains no preservatives, artificial flavors, or colorants.

Apple Cider Vinegar is a type of vinegar with a centuries-old use both to prepare food and to assist with several health concerns. Its health tonic properties have largely been praised, as apple cider vinegar has been touted relieving symptoms of roughly any disease you can think of.

A limited number of these presumed benefits are actually supported by scientific evidence, while most still await confirmation by actual evidence. Several small scale studies hint that the vinegar may help with the management of diabetes and obesity. Similarly popular are its benefits for the stomach and the digestive system. Its proposers support the fact that it may help calm down an upset stomach caused by cramping or gas discomfort. Acid reflux or heartburn is also believed to benefit from apple cider vinegar use. Because of its extremely low content of calories per serving it is strongly recommended to be used as an alternative to high-fat sauces or creams that are used to prepare certain foods.

There is also a limited number of studies which indicate vinegar may slow down progression of cancer and even kill cancerous cells. Studies however have come up with confusing results and some seem to indicate quite the opposite.

Apple Cider Vinegar is a combination of vitamins and minerals, which is claimed to improve your overall health.

The manufacturer’s allegations are supported by clinical research. This product is used traditionally to treat numerous medical conditions, but it is not often used in modern medicine. Pectin in the vinegar is a fiber which helps reduce bad cholesterol and helps in regulating blood pressure. The beta-carotene helps in countering damage caused by free radicals by offering potent antioxidant protection. Free radicals are formed during the oxidations that occur in our bodies, and they can attack sensitive cells killing them.

Also, there is some evidence that suggests Apple Cider Vinegar promotes weight loss. However, excessive amounts of apple cider vinegar for an extended period can lower potassium levels in the body and reduce bone density. It is also theorized that excessive intake of vinegar can cause hypokalemia, hyperreninemia, and osteoporosis.

For best results, it is recommended to take 1 or 2 capsules before meals every day. You should also drink more water, (at least eight glasses) on a daily basis.

Testimonials are posted online about Apple Cider Vinegar. What was being stated includes:

The manufacturer sells this product directly on their website, but it can also be acquired from other sources. Some retailers offer discounts or promotions and the shipping, and processing charges are relatively small.

7) How to Take Apple Cider Vinegar

The recommended daily dosage of Apple Cider Vinegar is two capsules per day. The manufacturer mentions no side effects. Long-term use, however, has been shown to affect teeth enamel and cause low bone density or potassium levels.

Apple Cider Vinegar is recommended for a variety of different health conditions, including skin and hair conditions or digestive problems. The vinegar has been used as a folk remedy for many years and is a trusted natural treatment to this day. This formula comes in the form of capsules, making it easy to transport and take. There are no consumer testimonials unfortunately to evaluate its actual effectiveness and observations of long term use of apple cider vinegar have revealed several potential risks which you should be informed of. This is why it is our strong recommendation that you consult a healthcare professional prior to using Apple Cider Vinegar.

New manufacturing technologies play an essential role in differentiating modern, new formulas from old ones. Brain supplements are growing in popularity, but not all are created equal.
Featured

When it comes to Amino Acids [Blend] products, HCF® Happy, Calm & Focused is one of the best supplements we've reviewed in years. Its unique FQ formulation can offer a lot in terms of supporting cognitive health and general well-being.

BrainReference readers can now try HCF® Happy, Calm & Focused as part of a free sample for a limited time – something you might want to take advantage of! 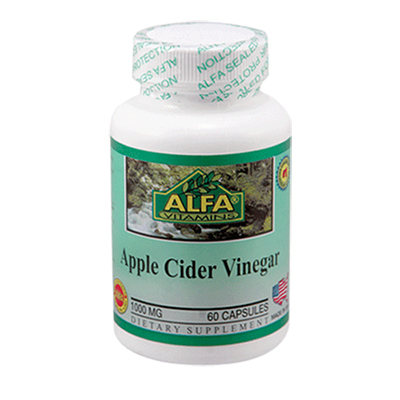 clear
Q:
What are the active ingrediens in Apple Cider Vinegar?
A:

Q:
What is Apple Cider Vinegar?
A:

Apple Cider Vinegar is presented as a dietary supplement supplement formulated in order to support general body health and well-being using a mix of vitamins and minerals. The company that develops and manufactures this formula is called Alfa Laboratories. This formula includes ingredients such as Vitamin C, Vitamin E, Calcium or Magnesium, that provide nutrients and substances essential for body health, weight loss has also been linked with the consumption of Apple Cider Vinegar.

The manufacturer's claims seem to be supported by scientific studies and positive testimonials. As stated above, the main goal of this product is improving the user's overall health, but it can also be used to treat a series of medical conditions. Apple Cider Vinegar is a natural product, and it does not contain any stimulants of caffeine. Numerous products are touted to improve the overall health of the user, so we suggest our readers compare products before making a purchase. Always look for a company that has a good reputation.

I always have a bottle of this in the house, it’s one of my favorite supplements.