AlphaZXT is a relatively new brain supplement that’s advertised to include a powerful formula of natural focus factors that naturally boosts neurotransmitters, which can help you learn faster, work smarter, and concentrate harder. Because of this, AlphaZXT’s manufacturer calls the supplement “Viagra for the brain.”

AlphaZXT is claimed to be water soluble, so its ingredients enter your brain quickly soon after you take it. You’ve got to admit that the AlphaZXT uses a whole lot of scientific sounding jargon, but does the scientific evidence match with the manufacturer’s claims?

The official website looks awful. Simple as that. There is a lot of talk about how great AlphaZXT is for attention, long term memory, working memory, and information processing, but there is nothing about what’s actually in this formula.

What we do know is that AlphaZXT contains Phosphatidyl Choline, which is actually a vital substance found in every cell in the human body. Phosphatidyl Choline has shown a bit of promise at helping to slow down aging related process and improved brain functioning and memory capacity in patients with dementia, but the results are still inconclusive.

AlphaZXT includes some other ingredients as well: St John’s Wort, Glutamine, Bacopa Monnieri, Ginkgo Biloba, Acetyl L-Carnitine, Dimethylaminoethanol Bitatrate, and Vinpocetine. How much of each? That’s a mystery because the exact amounts are not listed anywhere.

It’s also unclear which ingredient is the primary one, but our guess it would be the combo of Vinpocetine and St. John’s Wort because that makes the most sense. On paper, each ingredient that can be found in AlphaZXT looks great. Basically, the company used some of the most popular and most advertised ingredients in brain supplementation. But ingredients alone don’t make a great formula if they can’t work together to deliver the promised results.

AlphaZXT official website needs a lot more useful information for any prospective consumer who may be considering the purchase of this brain supplement. Right now, there are so few details provided about the company itself (we couldn’t even find where the company is located), it would be impossible for anyone to judge how beneficial this product would be. 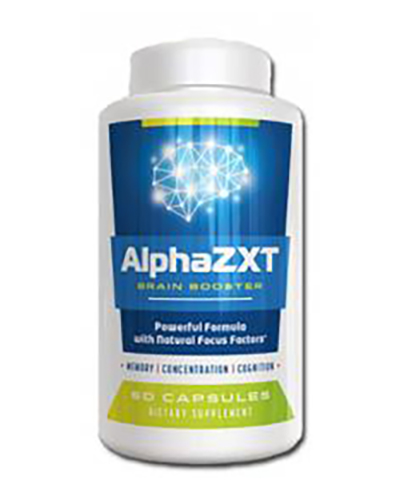